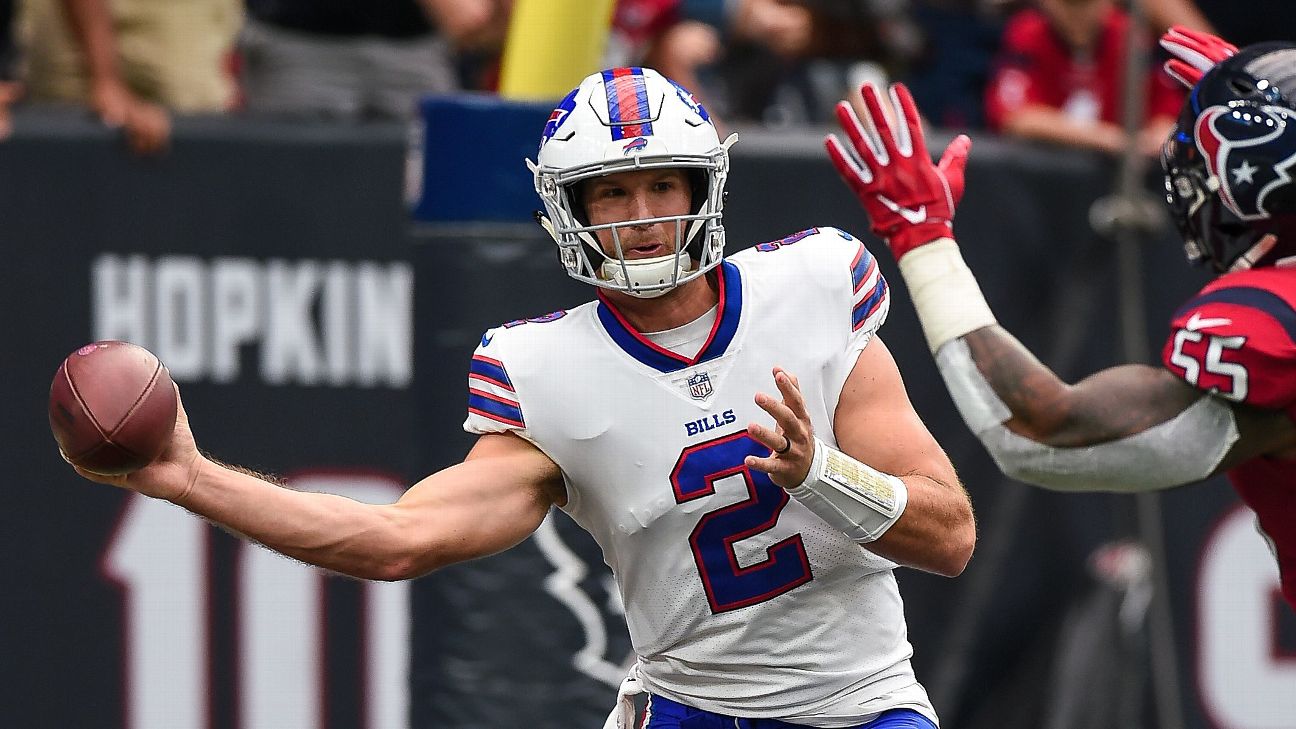 ALAMEDA, Calif. -- While Oakland Raiders coach Jon Gruden obviously sees something in quarterback Nathan Peterman, he also thinks he can do something for Peterman after signing him to the team's practice squad.

"Hopefully, we can take him into the offseason program," Gruden said of Peterman. "See if we can restart him and get him going."

Gruden, however, was quick to point out that Oakland signed Peterman merely as insurance with Raiders backup AJ McCarron back home in Alabama after the birth of his son, Cash, and the Raiders unsure when he would return.

Gruden has some familiarity with Peterman after working with him in 2017 on his QB Camp show on ESPN. Peterman also began his collegiate career at Tennessee, where Gruden started his coaching career as a graduate assistant in the 1980s.

"I did like the fact that I go back to the University of Tennessee, where he came from," Gruden said. "I spent a lot of time there. I know what kind of kid he is and what kind of worker he is.

"I like what he did at Pitt. They beat Clemson," Gruden said, referring to the Panthers' 43-42 win in 2016, when Peterman threw for 308 yards with five touchdowns and no interceptions. "I like what he did in that game, at Clemson. He showed some real savvy and some real pocket presence. He's an athletic guy. I know he's had some problems in Buffalo, but again we're talking about our practice-squad quarterback here. We have a big game on Monday night."

Peterman, a fifth-round draft pick of the Bills, was Buffalo's Week 1 starter this season but was benched at halftime after throwing two interceptions and completing just 5 of 18 passes for 24 yards. In eight career games, Peterman has thrown three TDs and 12 interceptions on 130 pass attempts. He also was picked off on one of his three pass attempts in Buffalo's AFC wild-card loss last season.

The signing of Peterman sounded off alarm bells around the league, even if it was just to the practice squad, with McCarron away.

"I don't really watch the media," Peterman said. "I haven't seen anything. So I guess that's one thing you learn -- it's all about outside noise and that's not really what I'm about.

"Just that it was an opportunity, you know, and to be, obviously, around somebody who's done it for so long and is definitely a master at what he does. To learn from good players in front of me, too, is a great opportunity."
Report a correction or typo
Related topics:
sportsespnpractice squadrestartnfloakland raidersjon grudennathan peterman
Copyright © 2022 ESPN Internet Ventures. All rights reserved.
TOP STORIES
Death toll rises to 21, mostly children, in TX school shooting
Uvalde school shooting: What we know about 19 kids, teacher killed
Bay Area mental health experts address Texas tragedy, trauma
Watch Steve Kerr's raw, emotional plea after Texas shooting
Senator begs for gun compromise after Texas school shooting: VIDEO
East Palo Alto man cultivates kindness through his garden
A look at some of the deadliest US school shootings
Show More
Biden says 'we have to act' after Texas school shooting
ABC7's new 24/7 live stream offers local news, weather
Man arrested in SJ former workplace stalking case, police say
1st possible CA case of monkeypox believed to be in Sacramento
Senior with Native American regalia on cap denied grad walk
More TOP STORIES News