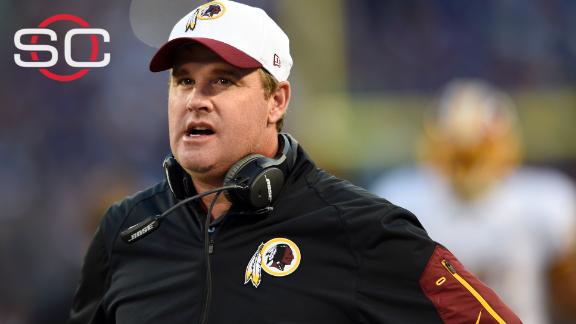 ESPN reported earlier Monday that Washington's coaching staff had informed players that Cousins would start in the Redskins' regular-season opener against the Miami Dolphins.

But Gruden said that Cousins would start beyond Week 1, saying that the Redskins are "Kirk's team."

The Redskins' decision to start Cousins comes amid turmoil surrounding Robert Griffin III, who has been the subject of ongoing controversy over the past week in Washington.

Some high-ranking Redskins officials and coaches want to part ways with Griffin, who has been sidelined with concussion symptoms, but are meeting resistance from the team's ownership, team and league sources told ESPN on Sunday.

Gruden disputed, however, that the Redskins have discussed moving the former Heisman Trophy winner, saying that"the door is not shut on Robert Griffin.

"Robert is a pro," Gruden said. "We have a lot of respect for what he's accomplished here. ... He's done some great things."

Gruden also commended Griffin, who entered training camp and the preseason as Washington's starter, for his hard work but said Cousins has earned the starting job.

"Really, this is about Kirk doing an excellent job and winning the job," Gruden said. "Robert is disappointed, as I'm sure Colt [McCoy] is disappointed.

"I think all three quarterbacks should be commended for their efforts, their willingness to get better.But when it's all said and done ... we feel like at this time, Kirk Cousins gives us the best chance to win."

Gruden added that Cousins "has taken a giant leap" since being benched in Week 7 of 2014 after committing 11 turnovers in five games.

Cousins also praised Griffin for the example and leadership he has provided.

"I can't say enough about the class act Robert has been from the day I was drafted to now," said Cousins, who was picked in the fourth round of the 2012 draft. "The way he has treated me, the way he has handled a lot of adversity -- I have marveled at his ability as a rookie to never flinch, to compete as a young player in this league and win Rookie of the Year and taking our team to the playoffs and winning the division. I marveled at that.

"The way that he is a fierce competitor, I've always respected. He has always been a guy who remains classy, works very, very hard, and I've learned from that example."

Gruden said Griffin, who missed Saturday's preseason game, is still in the NFL's concussion protocol. When he is cleared to return, Gruden said the Redskins would determine whether Griffin or McCoy would be the backup quarterback.

"We believe in Robert," Gruden said. "It's a good problem to have -- to have three quarterbacks that are competing and working their butts off."

Cousins has started nine regular-season games over his first three seasons in the NFL. The 27-year-old said that he realizes Monday's announcement does not mean he will necessarily keep the starting job throughout the season, especially if he performs poorly.

"It's a step in the process," Cousins said. "It doesn't feel like the finish line by any means."

ESPN Redskins reporter John Keim and The Associated Press contributed to this report.