Kobe on pulling back, not taking over: 'It has to be done' 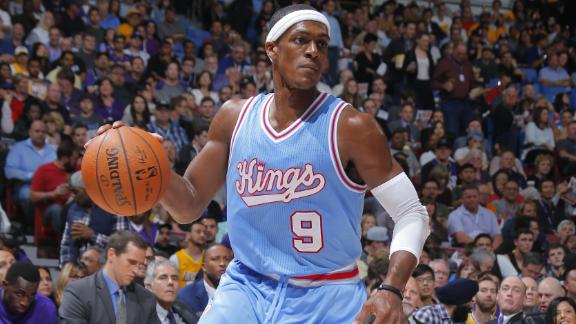 SACRAMENTO, Calif. -- Throughout his career, Kobe Bryant has taken over plenty of games, going on epic scoring flurries by overpowering opponents with his talent, skill and athleticism.

Despite his advanced age and several recent season-ending injuries, the 37-year-old Bryant, now in his 20th season with the Lakers, still enjoys taking over games, or at least trying to, especially when his team is down big, as they have been many times in recent years.

But Bryant concedes it's not easy to pull back.

Bryant played just 22 minutes against the Kings in part because the game got out of hand, with the Kings at one point leading by 31.

Even in limited minutes, though, Bryant's play was less than inspiring for the second straight outing.

After scoring 24 points on a rough 8-for-24 outing in the team's season-opening loss to Minnesota on Wednesday, Bryant finished with 13 points on 5-of-12 shooting, including 1-of-8 from 3-point range, against the Kings.

"My legs still aren't there yet in terms of timing and 3-point shots, but [Friday night], I felt I played much better," Bryant said.

On two consecutive plays in the first half, the Kings knocked the ball off Bryant's knee out of bounds. Kings center DeMarcus Cousins also wrestled the ball from Bryant's grip and forced a jump ball that Bryant didn't even attempt to win.

Bryant is also 4-of-21 from 3-point range through two games. Against the Kings, Bryant missed three 3-pointers in the first four-plus minutes and was 1-of-6 from beyond the arc in the first nine minutes.

Lakers coach Byron Scott has said he'd like Bryant to shoot closer to the basket.

"I'm not worried about it," Bryant said. "I can always get to those spots."

And then he steered his answer in a different direction altogether, toward the team's young players.

"Which is part of me taking a step back, which needs to be done. You have to let the young guys make those reads, and you have to be able to help them and support them with those reads."