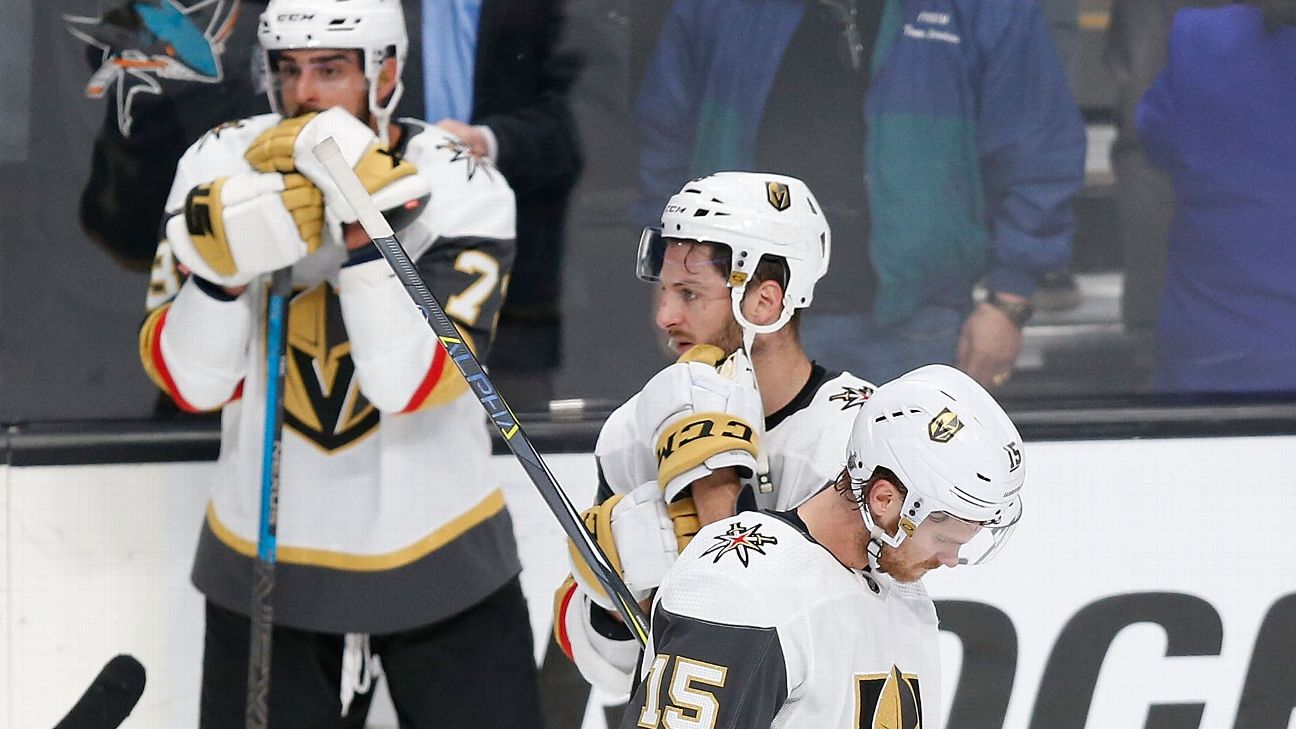 He expressed concern for Sharks captain Joe Pavelski, who bled profusely after he tumbled and slammed his head on the ice in the third period. But then Marchessault said, angrily and unequivocally, that the five-minute major penalty to Cody Eakin that resulted from that injury -- during which San Jose erased a 3-0 deficit with four quick power-play goals -- "stole" Game 7 from the Knights.

"It's a f---ing joke. To call five minutes for that? It changed the whole outcome of the game," Marchessault said after a 5-4 loss to the Sharks on Tuesday night. "Like, seriously, what is that? It's so disappointing. The game's not even close. It's 3-0. Call a [two-minute minor]? OK. But a five? For something you don't even see? You just call the outcome. It's a f---ing joke. It's embarrassing. That's what it is."

In what Sharks coach Peter DeBoer said was "the craziest game I've ever seen," the Knights had a 3-0 lead in the third period with goalie Marc-Andre Fleury stopping everything in sight. A second-round date with the Colorado Avalanche seemed inevitable. But the Sharks had already shown during this series that there are no inevitabilities, rallying from a 3-1 series deficit and earning a Game 7 after a double-overtime win in Vegas.

Midway through the third period, Pavelski won a faceoff from Eakin, who then delivered a cross-check to the Sharks center's chest. Pavelski stumbled backward and collided with Vegas forward Paul Stastny, who knocked him off his skates. Pavelski fell straight to the ice on the right side of his head, his helmet slamming hard, and began bleeding. Brent Burns and other Sharks players surrounded their captain, calling for the training staff. Pavelski eventually sat up, and gingerly skated to the bench, his teammate Joe Thornton pressing a towel against his head.He was eventually helped to the locker room.

Neither of the two referees, Eric Furlatt or Dan O'Halloran, signaled for a penalty as play went on. But as Pavelski was being treated on the ice, a significant call was made: Eakin was given a major penalty for cross-checking and a game misconduct with 10:47 left in the period.

A major penalty for cross-checking, by rule, is "at the discretion of the referee based on the severity of the contact" on the play.

"Furlatt said, 'It looks pretty bad.' If it looks pretty bad, then clearly you did not see it," Marchessault said. "It's a faceoff. It's a push. Probably 50 percent of the faceoffs, players -- if they lose -- they probably give a small cross-check, right? If you want to call the cross-check, fine, call it. It's a cross-check. But seriously, he falls bad. It's unfortunate. Don't get me wrong: I'm a huge fan of Joe Pavelski. And he went down, and I really hope he's OK and he comes back. But that call changes the whole outcome. It changes the whole future of us and the outcome this year. It's a joke. I would be embarrassed if I was them."

The NHL, through a pool reporter at Game 7, issued a statement from series officiating supervisor Don Van Massenhoven: "The referees called a cross-checking penalty for an infraction that caused a significant injury. In their judgment, the infraction and its result merited a major penalty."

Requests by the pool reporter to further clarify which official made the call, or the process behind making it a major penalty, were denied.

Vegas coach Gerard Gallant said after the game that the on-ice officials described a scene that didn't actually occur.

"They said he cross-checked him across the face, and as we all saw, that didn't happen," Gallant said. "There was no high-stick that hit him in the face. When Stastny came out, he fell and banged his head on the ice. That's the unfortunate part of it. It was an awful call. We've all seen it. It's too bad we end up losing because of that because we're in control of the hockey game."

One team's frustration is another team's opportunity, even if the odds were stacked against them. According to MoneyPuck.com, the Sharks had a 1.19 percent chance to win the game when they were given the five-minute major.

But probabilities can't always account for variables, such as how San Jose used the Pavelski injury as a rallying cry on their bench.

"You see our leader go down. He's out cold on the ice, and it kind of looked like he was seizuring up a little bit. So tough to see, man. Real tough to see," Sharks center Logan Couturesaid. "But you've got to give credit to [Thornton]. As soon as we got to that bench, he said, 'You guys go out and you get f---ing three goals right now.' And I mean, when a guy that's played 20 years orders you around like that, bosses you around, you've got to go do it. So we did. We got four."

Vegas began losing control just six seconds into the penalty kill, as Couture sent a wrister that Fleury whiffed on to make it 3-1. Tomas Hertl followed that at 10:09, a deflection from the slot of an Erik Karlsson point shot, with Fleury completely screened by Timo Meier. Couture struck again at 12:53, and the Knights' lead had evaporated within 3 minutes, 33 seconds. Then it was Kevin Labanc, who earlier in the game was handcuffed by a bouncing puck and missed a gaping open net, converting for the 4-3 lead.

Four minutes and seven seconds of power-play time. Four goals, and a Game 7 lead, thanks to a power play that had been 4-for-25 entering the game. It was the first time all series that a team that had the lead ever trailed in a game in which it held it.

But that's the kind of effort the Sharks mustered when their captain went down.

"He's the heart of this team, and to see him go down like that and suffer like that, it was heartbreaking for us," Thornton said of Pavelski. "That power-play unit won us the game, but you know, the boys, they got together and they said, 'This is for Pav.' So we love him. It was just a matter of will, and we willed that one for him."

The Knights, however, still had a rally of their own, getting a goal from Marchessault with 47 seconds left in regulation with Fleury pulled for an extra skater. The game went to overtime, where both Fleury (43 saves) and San Jose goalie Martin Jones (34 saves) put on respective clinics. But spare forward Barclay Goodrow, on just his second shift of the overtime, scored at 18:19 to eliminate the Knights.

The Sharks became only the second team in NHL history to overcome a three-goal, third-period deficit to win a Game 7, joining the 2013 Boston Bruins.

"They scored four goals on the power play. They came clutch. They feed off the bad call, they come back, 4-3, and get the big goal in overtime. You have to give them credit at some point. They're a great hockey team," Marchessault said.

He said this instant classic Game 7 has been tainted, comparing the plight of his team to that of the New Orleans Saints, and the infamous pass interference non-call in the NFC Championship Game that helped the Los Angeles Rams reach the Super Bowl.

"It's the same thing as with that football team. The Saints. It changes the whole outcome," Marchessault said.

"They called a bad call, and look where we are. Summer starts, and it's f---ing five months now until game one of the regular season starts. It's awful. You think we were ready to get our summer going here? We're a great team. It's unbelievable." 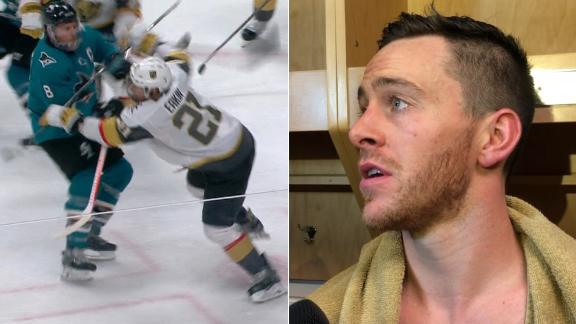 Marchessault rips refs over penalty that 'stole' Game 7
Vegas Knights forward Jonathan Marchessault sounds off on the 5-minute major penalty assessed to Cody Eakin that changed the complexion of Game 7. 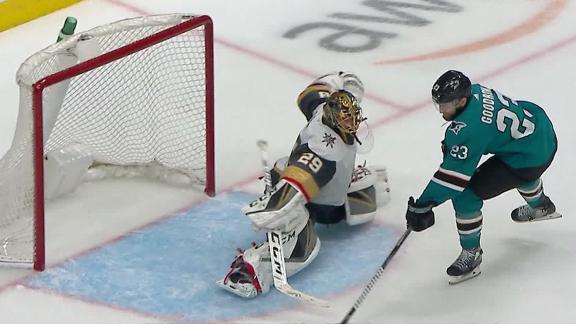