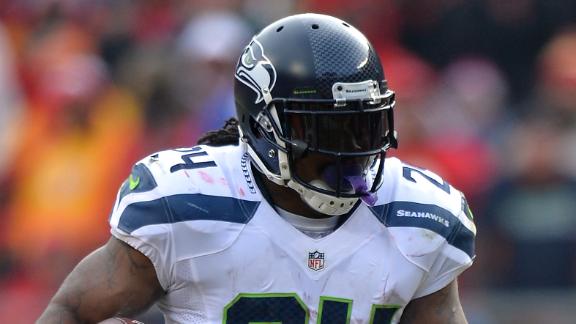 Marshawn Lynch didn't make himself available to reporters in the locker room after the Seattle Seahawks' loss to the Kansas City Chiefs, possibly setting himself up for a six-figure fine, but he wasn't completely silent Sunday afternoon.

On the team's bus outside Arrowhead Stadium, the running back talked to NFL.com in a telephone interview about his future with the Seahawks and the team's current fortunes.

Lynch isn't expected to be with the Seahawks in 2015, sources have told ESPN's Chris Mortensen and other media outlets. Asked if he thought he'll be back in Seattle next season, Lynch said he wasn't sure but said all the talk is coming from the organization and not himself.

"Do I think I'll be gone after this season? I don't know, man. The Seahawks, their front office gets in the media; they talk a lot. I don't talk too much. I just play the game," he told the website.

"If they have something going on, I don't know about it."

Asked about reported friction between himself and coach Pete Carroll and an NFL Network report that Lynch "does not communicate" with the coach, the player said:"Pete's my head coach. Well, I mean, you know, he's really not in my position meetings. ... It ain't like we get to chop it up like that."

Lynch didn't accompany his teammates to the locker room during halftime Sunday, staying on the bench until the third quarter began.

"He thought it would be better for him to stay out," Carroll said, not elaborating on why Lynch would think that was advantageous in such harsh weather conditions.

Lynch told NFL Network that he stayed on the bench because he couldn't walk due to fatigue.

Lynch's agent has denied reports that the running back was upset and refused to board the team's bus for a road game after wide receiver Percy Harvin was traded to the New York Jets earlier this season. Asked Sunday if the trade upset him, Lynch said "I'm upset when I don't get a first down on fourth-and-inches. ... You know, it is what it is. I was surprised, I guess you could say."

He rushed for 124 yards Sunday but was stuffed on a crucial fourth-and-1 in the fourth quarter of the Seahawks' 24-20 loss. Lynch told NFL.com that it was a "hard-fought game" and does nothing to diminish the Seahawks' hopes to repeat as Super Bowl champions.

"Is this a championship team? Yeah, yeah, we've got the heart of a champion," he told the website. "When you've got players like Richard Sherman, Earl Thomas, Kam Chancellor -- you're about to make me name the whole damn roster -- and there's some young guys whose names a lot of people don't know who bring a lot of fight. I always look at the best of our team. So ... hell yeah. I would have to be a fool to say no."

Marshawn's Lynch's Future In Seattle
Jerome Bettis and Bill Polian react to Seahawks RB Marshawn Lynch remaining on the field during halftime of Sunday's loss to the Chiefs, what this means for Seattle and potential discipline coach Pete Carroll may hand down.