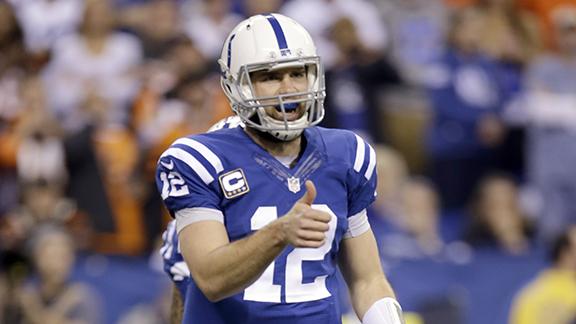 INDIANAPOLIS -- Despite his sixth postseason loss in as many games, Marvin Lewis plans on returning as coach of the Cincinnati Bengals next season -- if the team will have him back for a 13th season.

While referring to a hopeful return trip to the playoffs next season minutes after a 26-10 wild-card loss to the Indianapolis Colts on Sunday, Lewis was asked if he was expecting to return in 2015.

"Tomorrow's not promised for anyone," Lewis said. "That's part of life in the NFL and the finality of losing when you lose in the playoffs."

He agreed last offseason to a one-year contract extension that would take him through the 2015 season.

Lewis, who has been head coach of the Bengals since 2003, has led the team to four consecutive playoff appearances. Such a streak had previously been unheard of in Cincinnati. Those four appearances also stand in stark contrast to the 1990s, when the Bengals had losing records in eight of 10 seasons.

Lewis also has exactly 100 wins in his career. None of them have come past Week 17.

"The only way to do it is to at some point -- whoever it is, whatever it will be -- to go back to work, put their heads down and kick the door down," Lewis said about winning in the playoffs. "That's all you can do. There's no other words about it."

Safety George Iloka was among the Bengals who anticipate Lewis being back next season.

"I don't see why not," Iloka said. "He's done a good job. That loss ain't on him. That's on us. They had us pretty prepared. We were real confident going in, and we were in the game until the fourth quarter.

"He wasn't out there playing. The Xs and Os can only take you so far. It's about the Joes out there. We've got to place some of that on us."

Sunday Blitz: Bengals-Colts Recap
Jim Basquil and Eric Allen break down the Colts' 26-10 win over the Bengals in the AFC Wild Card game.