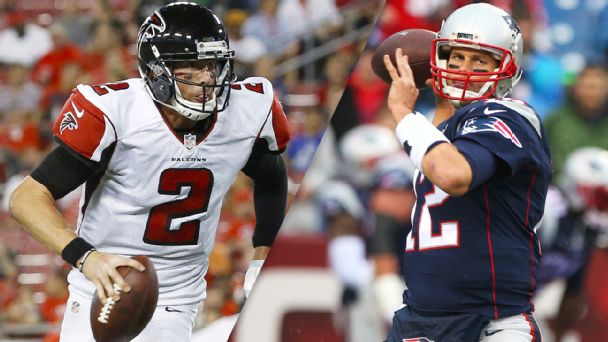 FLOWERY BRANCH, Ga. -- There is a strong mutual respect between Matt Ryan and Tom Brady as they prepare to square off in Super Bowl LI.

Ryan, the Atlanta Falcons quarterback and likely MVP front-runner, talked Wednesday about what he admires most about Brady, a two-time MVP with the New England Patriots.

"He's kind of set the bar for longevity -- aging well and playing at a really high level for a really long time,'' Ryan said. "I know that he's incredibly dedicated off the field in terms of taking care of himself, both mentally and physically, and training all year-round."

Brady, 39, entered the league in 2000 as a sixth-round draft pick and is aiming for his fifth NFL championship. Ryan, 31, the third overall pick in 2008, will be making his first Super Bowl appearance.

"He's at it all year-round," Ryan said. "He's kind of shown the way on how to do that: how to take care of yourself and how to approach this the right way so you can play for a long time and play at a high level for a long time.''

Earlier this month, Brady touted Ryan as an MVP candidate, telling WEEI radio, "I think Matt has had an incredible year. I think he is as deserving as anybody. He's got that team playing well.''

"Tom has had an unbelievable year," Ryan said. "Played extremely well and been extremely efficient: a lot of touchdowns, very few turnovers. He's just played really, really good football. He's been that way for a long time. He's been so consistent throughout his career -- such a great player and such a great competitor. And he's certainly had a great year.

"He's been a friend for a long time, too. I've gotten to know him a little bit since I've been into the league. Certainly he's a good person and a good guy to talk to."

"Back and forth throughout the season, just letting him know he's doing a good job when I see the highlights," Ryan said. "And vice versa, the same for him. So just some back-and-forth. That's kind of the unique fraternity at the quarterback position."

Ryan has seven touchdown passes and no interceptions in two games this postseason. The previous six quarterbacks to throw that many touchdowns without an interception in a postseason all won the Super Bowl that year and won MVP of the game, according to ESPN Stats & Information.