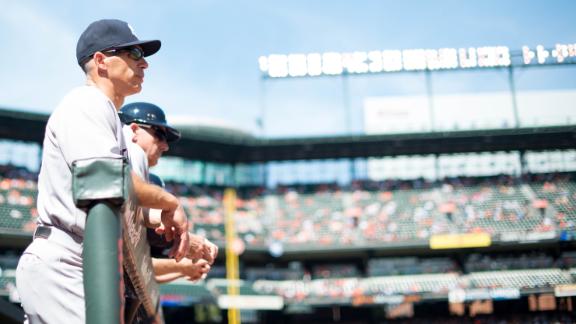 DUNEDIN, Fla. -- Major League Baseball began briefing its 30 teams this week on its new pace-of-game rules, and clubs are learning that the ramifications will have an impact in a variety of areas, including midinning pitching changes and new ways for managers to signal for replay reviews.

"I thought they did a great job of presenting it," Toronto Blue Jays general manager Alex Anthopoulos said Tuesday, after his team's meeting with MLB officials. "I thought it was a good meeting. I don't think that there was anything I was alarmed by. ... I think some of these changes are going to be subtle. Like anything, you'll have proponents and you'll have people who are against it. But I'm all in favor. I think it's a great thing. And I love that they're being proactive about it."

Anthopoulos and members of the Blue Jays' front office and coaching staff were briefed Tuesday by MLB senior vice president of baseball operations Peter Woodfork and MLB director of umpire development Rich Rieker. MLB's Joe Torre was scheduled to be part of the session but was unable to attend due to a personal matter.

While participants were reluctant to reveal details of everything that was discussed, here is the essence of what clubs in both Florida and Arizona are being told about the new rules, according to Woodfork and other sources:

The timers in ballparks that are used to count down between-inning commercial breaks will also be used during pitching changes in the same way. When a reliever leaves the bullpen and reaches the field, the timer will be activated -- starting at 2 minutes, 25 seconds on local TV games, 2:45 on national games. The reliever will have that amount of time to reach the mound and throw his warm-up pitches. As with between-inning breaks, relievers are supposed to throw their final warm-up pitch with 30 seconds left on the clock. That change wasn't specified in last week's news release announcing the new rules but was included in MLB's written explanation of the changes to all 30 clubs.

When players violate one of the new rules -- by not being ready to pitch or hit when the clock counts down or when a hitter leaves the batter's box between pitches -- they are subject to fines up to $500 per violation. However, umpires are expected to be instructed not to go out of their way to indicate that a player has committed a violation. Instead, they would be told just to mark down the infraction on their card, much the way they would if there was an equipment violation.

If a player is a habitual violator, particularly of the batter's box rule, umpires are expected to have some leeway to handle those situations differently. But for the most part, league officials will speak to habitual violators afterward, off the field. In general, umpires are likely to be urged to avoid confrontations over violations of the pace-of-game rules.

Hitters who keep one foot in the box but maintain lengthy routines of adjusting batting gloves and other pre-pitch rituals will not be considered to be in violation of the new rules, even though it runs contrary to the spirit of them. Anthopoulos said MLB officials used Blue Jays slugger Jose Bautista as an example of a player who "is able to adjust his gloves, adjust his helmet, do all those things and keep one foot in the box."

While managers will be encouraged to signal for replay reviews from the dugout area, umpires and league officials understand that won't be possible in every case. In fact, it's expected that most replays will still require the manager to inform the umpire verbally of exactly what he is challenging. But Blue Jays manager John Gibbons said managers no longer will have to approach umpires who made a call on the bases to issue a challenge. Instead, they can simply get the attention of the home-plate umpire to indicate they are considering challenging the last call. Umpires also are expected to approach the dugout when necessary to allow verbal challenges to move more smoothly.

Managers are being told they can still wait for their video consultants to let them know whether to challenge a play and that they won't necessarily be under any pressure to challenge plays more quickly.

Although there won't be a pitch clock in the major leagues this year, MLB will be supplying information to all clubs about how long each pitcher takes between pitches. MLB "has that information now," Woodfork said, and the league will "try to have that information available [to clubs] when the games start." Teams then, presumably, would pass that information along to pitchers, to give them a feel for whether a pitch clock would affect their routines if it is ever implemented in the future.

While MLB anticipates there could be some resistance to the new pace-of-game rules from certain players, at least initially, it hopes players understand that these changes are being made gradually so that players have time to adjust. And MLB is telling teams that it is seeking a "partnership" between players, umpires and clubs to allow the new rules to improve the tempo of games without causing conflict or affecting the way the sport is played.

"We're trying to do something overall to help improve the game," Woodfork said. "The program will be effective with the cooperation of players, umpires and the clubs all working together. The goal is for everyone to get on the same page and try to make things better."

MLB will not meet with players directly to brief them on how the new rules will be implemented. That will be left up to the players' union, which also is in the process of meeting with all 30 clubs, and individual teams. Gibbons said he would meet with his players before spring training games start to go over rules that will affect them.

"We'll talk to them," he said. "They want us to clarify this with those guys. It's pretty simple. But they need to know what's going on."