MLB points to rulebook in defense 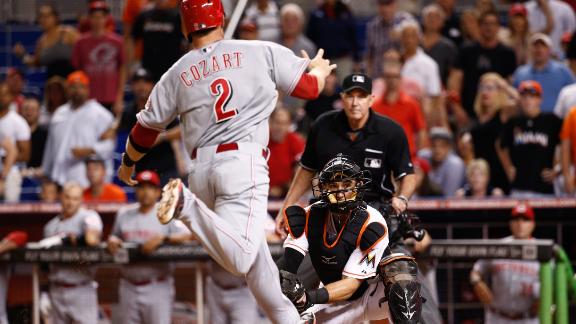 Major League Baseball issued a statement Friday defending a controversial call at home plate that led to the ejection of Miami manager Mike Redmond and generated vehement complaints from the Marlins following their 3-1 loss to the Cincinnati Reds on Thursday.

Cincinnati's Zack Cozart was initially ruled out by umpire Mike Winters while attempting to score the tying run in the eighth inning. But a subsequent review declared him safe after replay officials in New York determined that Miami catcher Jeff Mathis had violated Rule 7.13 by failing to provide Cozart with a lane to the plate.

The Reds capitalized on the overturned call to take the lead on a two-run single by Ryan Ludwick. Redmond was ejected for arguing after the six-minute review, and Marlins president David Samson referred to the sequence of events as a "travesty.''

Rule 7.13 prohibits catchers from blocking home plate without possession of the ball and decrees that baserunners with an open route to home plate cannot diverge from a direct path to initiate contact with a catcher or other player covering home. In its statement Friday, MLB said the rule has been "very effective'' in achieving its main goal of eliminating dangerous collisions at home plate.

Baseball stood by the Marlins-Reds ruling even though Cozart was out by a significant amount and was tagged out without a slide.

"The Replay Official judged that the catcher did not provide a lane to the runner and hindered his path to the plate without possession of the ball,'' MLB's statement said. "The throw also did not force the catcher into the runner's pathway. As a result, in accordance with Rule 7.13, the ruling on the field was overturned and the run was allowed to score.

"We realize that people may reasonably have different opinions regarding the application of Rule 7.13 in any particular instance because it is a judgment call. We are continuously evaluating the application of the new rule, and we anticipate a full review with all appropriate parties in the off-season in order to determine whether any changes should be made. We also recognize that the exorbitant length of last night's review, which was more than three times the season average, must be avoided in the future.''

MLB's explanation isn't likely to satisfy the Marlins, who were unanimous in their outrage following Thursday's loss.

"As a former catcher in this league for 13 seasons, as a grinder, as a guy who loves this game and respects this game so much, this game has been a part of my life forever, but to lose a ballgame tonight on that play is a joke, it's an absolute joke," Redmond said. "That guy was out by 15 feet.''

Said Samson: "The fact of the matter is that everyone around baseball should be embarrassed by a call like that.''

Thursday's game marked the second time this season that the Reds have been involved in an MLB review involving the interpretation of Rule 7.13.

On June 18, Cincinnati catcher Devin Mesoraco was ruled out on a force play at home plate in the third inning of an 11-4 win over Pittsburgh. The call was changed to safe after officials at MLB's replay command center in New York determined that Pirates catcher Russell Martin had illegally blocked home plate with his foot.

Joe Torre, MLB's executive vice president of baseball operations, reviewed the decision and said Rule 7.13 had been applied incorrectly on the Mesoraco-Martin play. Baseball sent out a directive to umpires and instructed them not to apply the new home-plate collision rules to force plays moving forward.

Collision Rule Controversy
In the wake of the controversial ruling in Thursday's game between the Reds and Marlins, ESPN umpiring analyst Jim McKean discusses the need for a rule change concerning plays at the plate.