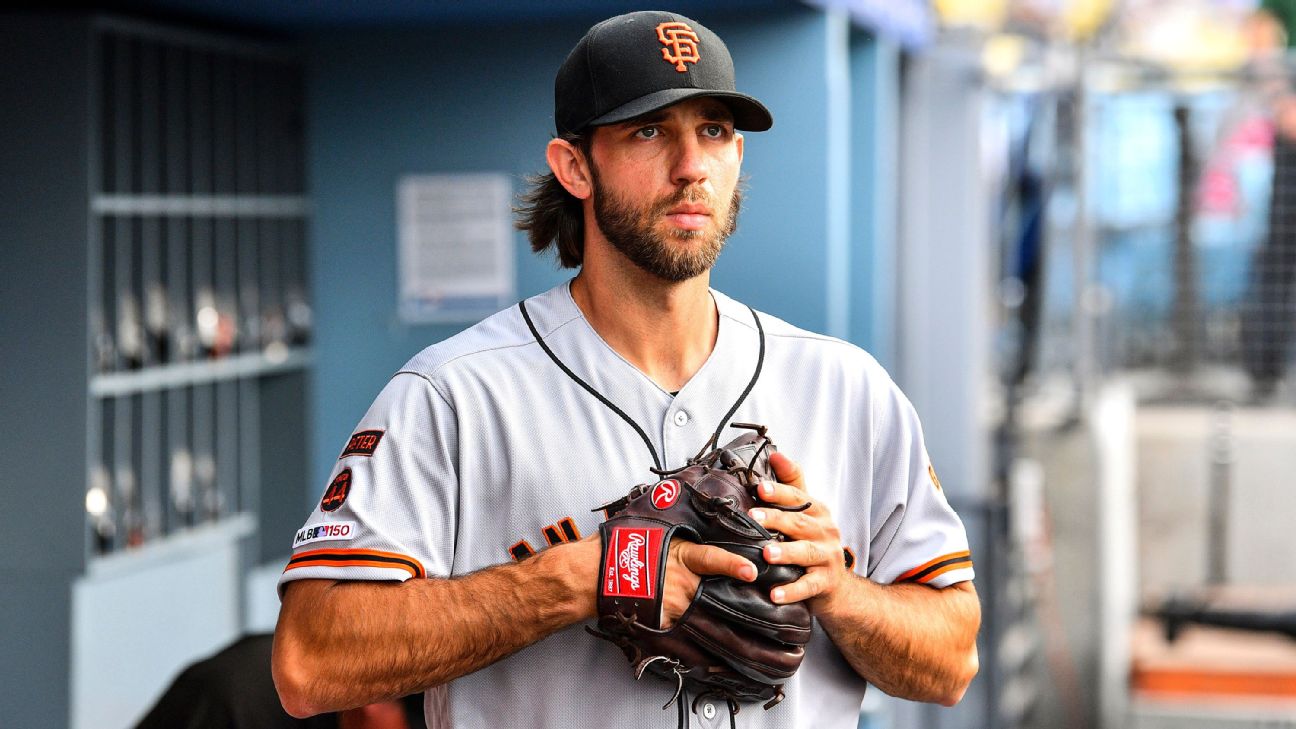 ESPN
By ESPN.com
Like everyone else around the sport, we'll be watching this weekend's games with one eye on the field and the other on the latest happenings heading into next week's MLB trade deadline. While we all click refresh on the deadline buzz, a Yankees-Red Sox showdown, Madison Bumgarner's potential final start with the Giants and a couple of AL West players on insane hot streaks will provide plenty of excitement on the diamond.

Here's what we're most excited to see:

It's Yankees-Red Sox time! The Sox certainly started things off with a bang in Thursday's 19-3 blowout. What would it take from New York this weekend (Sunday Night Baseball, 7 p.m. ET on ESPN)to send Boston into sell mode?

Eddie Matz: First things first: Winning the division is a lost cause for the Red Sox. Beyond that, if the Yankees win the next three, and if Tampa Bay sweeps Toronto and/or Oakland sweeps Texas, Boston could find itself five-ish games out of the wild card. That certainly seems like sellers territory. Then again, this is Dealer Dave Dombrowski we're talking about. It's hard to imagine Boston's prez throwing in the towel. As much as it might make sense for the Sox to sell -- not unlike the Yankees did in 2016 -- I don't think there's anything the Bombers can do, not in the space of this one weekend, to force the issue.

Sam Miller:Hypnosis. Otherwise, I don't see it: The Red Sox, as it stands now, are more likely to make the playoffs than not, according to FanGraphs' playoff odds. They've got a 5% chance of winning the World Series, according to those same odds. There are ... oh, probably 21 teams that should be selling before the Red Sox do. It is true that it's hard for a wild-card team to win a World Series (only one of 28 has, since the two-WC setup was implemented), and it is further true many GMs have a hard time figuring out how much to invest in these long-shot bids. But if the Red Sox want us to remember the 2018 squad as one of the greatest of all time -- as they should, and as (it seems to me) they were -- they need to protect that club's legacy by, at the very least, trying to make the playoffs this year. It's pretty much the same roster.

David Schoenfield:The Yankees could win the next three games. They could throw a combined no-hitter using seven relief pitchers. Mike Tauchman could hit five home runs. The Red Sox's bullpen could blow two leads in the ninth inning. All that could happen and the Red Sox won't be selling. The big question: Why would they sell? The Red Sox don't sell. They're still in the wild-card race. They're not going to trade Mookie Betts. Rick Porcello, and his 5.61 ERA won't bring back anything. The other big stars make too much money. What, you want them to trade Rafael Devers? No, the Red Sox aren't going to sell. They might, however, buy a little something that rhymes with belief hitcher.

Madison Bumgarner is scheduled to pitch against the Padres on Sunday. What uniform do you think he'll be wearing on Aug. 1?

Miller:Unlike the Red Sox, the Giants really are teetering between sell-but-hate-yourself-for-it and hold-but-hate-yourself-for-it. They have almost no chance of winning a World Series, but they're having so much fun staying in it. It hardly seems worth ending the dream for the modest return that Bumgarner -- a two- or three-month rental who, over that past two years, has been barely better than a league-average starter -- would bring. This would be a lot easier to answer if we were doing Right After The Weekend Watch, with the wild-card race ever slightly more settled, but I'll guess the Giants lose 2 of 3 in San Diego and trade Bumgarner to the Twins.

Matz: He'll be wearing the road grays of the ...San Francisco Giants. Unless San Fran crumbles over the next week, there's no way to justify trading MadBum. By winning 17 of 20 games sandwiched around the All-Star break, the Giants have thrust themselves into a wide-open NL wild-card race. And if there's one pitcher in baseball you want pitching a one-game playoff, it's Bumgarner. The odds of San Fran surviving beyond that aren't great, not with the Dodgers waiting in the wings, but general manager Farhan Zaidi has to try, doesn't he? I mean, it's manager Bruce Bochy's farewell tour for goodness sake. Speaking of Bochy, the last time he and the Giants won the World Series in 2014, they did so as a wild card. MadBum stays.

Schoenfield:I'll go with the Giants. This hot streak is amazing, considering where the Giants were at the end of June (36-47, 7.5 games out of the wild card with eight teams ahead of them). I'm not really buying the Giants as a playoff favorite -- FanGraphs gives them a 6.7% chance of making the playoffs. But: I don't think they can give up on this team and trade away their ace. You can't give up future Hall of Famer Bruce Bochy in his final season. The Giants owe it to the players to keep Bumgarner and let the cards fall. You play to win, and even if the Giants aren't this good, they've given themselves a chance.

Mike Trout is out of his mind right now. How many total bases will he get against the Orioles this weekend (including the five he started the series with Thursday night)?

Miller:The Orioles have been by far the worst AL pitching staff at home but, surprisingly, only about the fifth-worst on the road. (They've allowed a lower OPS on the road than the Yankees' staff!) So we might be tempted to pick an almost reasonable number here, like 14 or something. (That would be about a .900 slugging percentage.) But I'm not tempted. The Orioles' pitching is terrible, all the time, in any park, and Mike Trout has got his first home run crown and his third MVP award in his sights. Put me down for something unreasonable: 21.

Matz: To paraphrase the cinematic masterpiece that is "Megamind," whatever you think the MLB record is for most total bases in a series, take that number and multiply it by ... six. Then add the individual digits of that product together. Take that sum and divide it by itself. Subtract three, and then add 15 to that. Did you get 13 total bases? Sweet. Me, too. Glad we agree.

Schoenfield:Entering Thursday's game, Trout had 11 home runs in July -- one short of his high for a month and two short of the Angels' record for a month (Albert Pujols, Mo Vaughn and Tim Salmon). I'm betting he'll end the series with the team record for home runs in a month. Which means at least 12 total bases. Let's go with 18 all told.

Gerrit Cole is striking out a ridiculous number of hitters every time he starts. Over/under 10 K's when he takes on the Cardinals this weekend?

Schoenfield:You know what's going to be ridiculous? The amount of money Cole is going to get this offseason as a free agent. The Dodgers have already reserved a couple of Brinks trucks for Dec. 18. But so have the Yankees. And wouldn't the Rangers love to have him as they open their new park? Maybe the Phillies will want an ace. But I digress. The Cardinals are a little better than average in strikeout rate, but Cole has reached double figures in three straight starts and 12 of his 22 outings overall. I'll take the over.

Matz: Relatively speaking, the Cards don't whiff that much, as their K rate of 22.6% is the 12th-lowest in baseball. But the way Cole's going, that's absolutely meaningless. How do I know? His past two starts have come against the Angels and A's, who strike out less than any team not named the Astros. And he fanned 11 batters in each of those outings. Having said all that, I think Cole is due for one of those games in which he's more mortal than superhero. I'll take the under.

Miller:The Cardinals don't strike out that much, but I'll take the over. Cole's July fastball velocity is, at 97.74 mph, the hardest month of his career. His slider velocity is over 90 mph for the first month of his career. His strike rate has been up after a slightly wilder April, which has allowed him to pitch deeper into games -- he has completed seven innings in four of his past five starts. And now that there's buzz growing about his strikeout rate being an all-time record -- he's at 13.5 per 9, and the record (by Randy Johnson) is 13.4 -- he's got a reason to chase K's. So: Over!

Each week, we ask our panelists to choose one hitter they think will hit the most home runs and one pitcher they think will record the most strikeouts in the coming weekend. Panelists can pick a player only once for the season. We'll keep a running tally -- and invite you to play along at home.