MLB Weekend Watch: Predictions, questions for all the top games 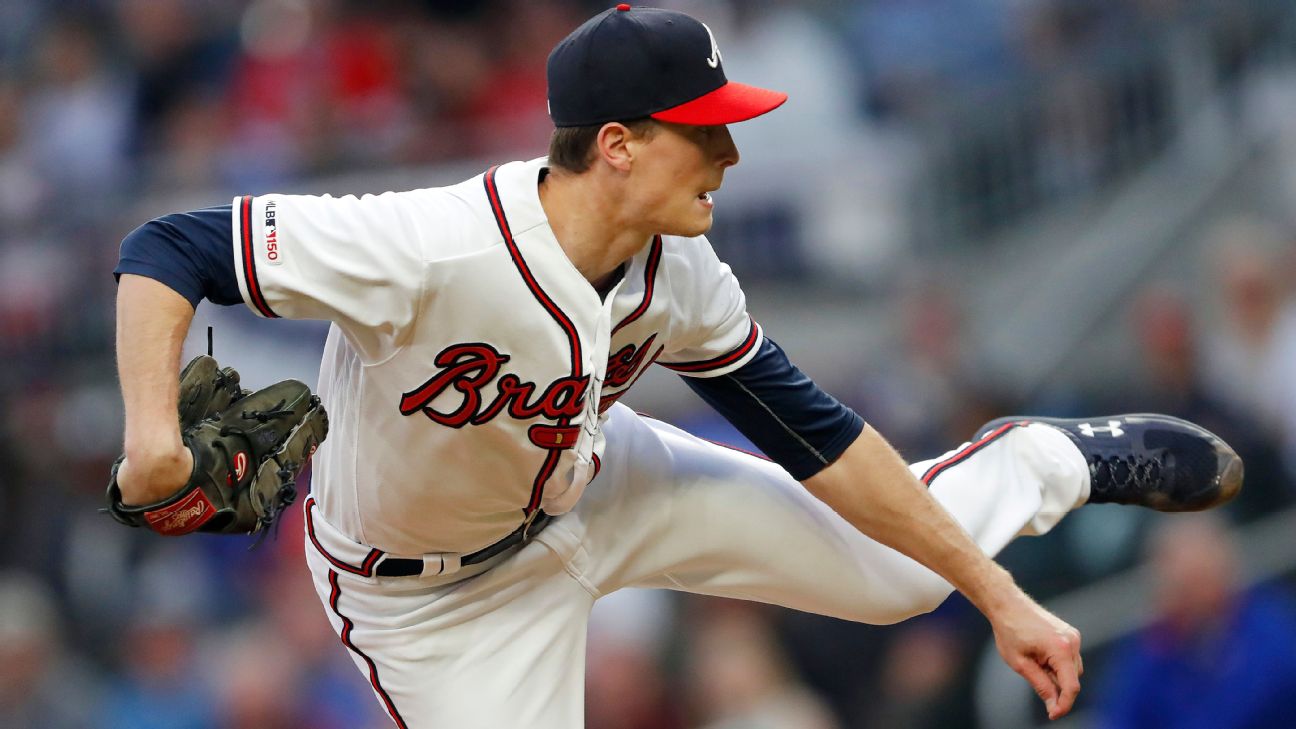 The defending champion Red Sox head to Tampa still mired in a season-long slump. Fresh off an onslaught of the Cardinals, Christian Yelich leads the Brewers against the Dodgers in a rematch of last week's series. And the young guns of the Braves' rotation take aim at the Indians. Here's what we're excited about this weekend and how we think things will play out.

Yes, it's mid-April. It's early. But what happens, short term and long term, if the Red Sox get swept in their three-game series at Tampa?

Eddie Matz: Short term, Boston fans will absolutely freak out while Tampa fans won't even notice because they're still completely dumbstruck by the Lightning's historic choke job in the NHL playoffs. Long term, the cost of college tuition will continue to rise in a manner that's wildly disproportionate to the general inflation rate.

Sam Miller: According to FanGraphs' playoff odds, the Red Sox already have shed 40 percent of their playoff odds this season -- from 90 percent likely to make it at the start of the season to 50 percent now -- and most of the spillage has gone to the Rays. A sweep would undoubtedly lead to panic in Boston -- and could actually push the Rays ahead of the Yankees as division favorites -- but it wouldn't be the end of the season. They'd still be as "in it" as, say, the Cardinals and the Braves are "in it," and they'd still have virtually all the players who won 108 games last year. So, anyway, what happens is: Short term, we all panic. Long term, whether any of this matters at all gets litigated in the final weeks of the season, not now.

David Schoenfield: I love all questions about the Rays because I'm all-in on the Rays. Did I have the guts to pick them before the season began? No, I did not. We've all made mistakes in life. I mean, I never traded Fernando Tatis Jr. for James Shields, but I did once trade a young prospect named Gleyber Torres for Dee Gordon in a fantasy league. The point is the Rays are for real, they're on a roll and while a sweep of the Red Sox wouldn't exactly bury the Beantowners, a deficit of more than 10 games -- even in April -- is huge and may mark the Rays as the AL East favorites moving forward.

The Brewers took two of three from the Dodgers last weekend in L.A. Will we see more of the same for the return series in Milwaukee?

Matz: Don't be silly. There's no way the Brewers take two of three because ... well ... it's a four-game series. Beyond that, they avoided Clayton Kershaw and Kenta Maeda last weekend, two guys who are good at pitching, have solid track records against the Brewers and have had success at Miller Park. This time around, Milwaukee faces both of them. Dodgers take three of four.

Miller: Superstars really can carry a team, but it's impressive/incredible/maybe a little worrisome how much weight Christian Yelich is lugging right now. Aside from Yelich's 1.5 WAR, the Brewers' entire offense and entire pitching staff have produced 3.0 WAR, which means Milwaukee has been, basically, more or less, the Royals With Yelich. (Also: 0.4 of those 3.0 WAR have been produced by pitcher Brandon Woodruff's bat.) The Brewers have a lot of very good players who'll get back to playing well, but if I'm making unnecessarily reckless predictions about games that are actually close to coin flips, then [broom graphic appears behind me on screen] let's call this one a Dodgers sweep [deafeningly loud sound effect of swishing broom plays].

Schoenfield: I believe the Brewers will give Yelich some red-tinted contact lenses to wear so he thinks he's facing the Cardinals instead of the Dodgers. Yelich is off to an amazing start, but remarkably he's not even the hottest hitter in this series. That's Cody Bellinger. Maybe we can just settle this like Ty Cobb used to when he was mad at an umpire -- with Yelich and Bellinger throwing down underneath the stands. (The Dodgers tee off against homer-prone Brewers starters and take three of four.)

Max Fried starts for the Braves on Sunday Night Baseball against the Indians (ESPN, 7 p.m.). Which of these young Braves pitchers (yes, Atlanta has another wave of top arms behind them) will have the best career -- Fried, Kyle Wright, Touki Toussaint or Michael Soroka?

Matz: I'm not a scout and I don't pretend to be one. They're all first-rounders, all stud prospects. But after consulting with my sources (and by sources, I mean the random number generator I just used, wherein I assigned each pitcher a number from 1 to 4 and did exactly one iteration), I'll go with Soroka.

Miller: You're asking us to forecast the entire careers of four similarly talented pitchers who over the next dozen years will all learn new pitches, all lose velocity, all risk catastrophic injury with every start, all see their effectiveness fluctuate based on a few degrees of spin axis on their primary breaking ball? I'd like to co-sign Eddie's method.

I'll take Soroka as the most likely to win 150 games, but Wright is probably most likely to make the Hall of Fame, Toussaint is most likely to throw multiple no-hitters, and all of them are more or less equally likely to be permanently affected by injuries in the next three to five years. I'd put Fried last on the list. Fried is good, too.

Schoenfield: I think there's a reason the Braves haven't packaged a couple of these guys for a stud veteran starter or position player: They don't know either! They don't want to make a mistake and trade the wrong guy. Fried has been very impressive early on, but I'll gamble on the guy with the best pure stuff in the group, and that's Toussaint. He dominated Double-A and Triple-A last year with a 2.38 ERA and 163 K's in 136 innings. He has been healthy, throws hard, has a plus curveball and changeup. It's all about throwing enough strikes or he ends up in the bullpen.

OK, you didn't like that question. Your pick: What's the one thing -- a game, a matchup, whatever -- you most want to see this weekend?

Matz: Can San Diego seize control of the NL West? While L.A. visits Milwaukee, the Padres host the lowly Reds. If things go their way, they could finish the weekend in sole possession of first place. San Diego hasn't led the division this "late" in the season since 2010. That's a mighty long time.

Schoenfield: Tyler Glasnow faces David Price on Sunday. Glasnow has three walks in 24 innings and has allowed just three runs. Glasnow as a strike-throwing machine is a very scary proposition for opponents.

Christian Yelich has owned Dodgers ace Clayton Kershaw in his career (1.497 OPS in 17 at-bats), and the Brewers star gets another crack at him Sunday.

Yelich's total bases in Sunday's game: Over or under 3?

Matz: Over, but it'll be close. The deciding factor is Yelich's success against the Dodgers' bullpen. He's a combined 5-for-7 lifetime (with a 1.856 OPS) against Kenley Jansen and Joe Kelly.

Miller: Even this year, even this year, Yelich has managed three total bases in slightly fewer than half of his games, so unless Kershaw makes the bold decision to pitch with a Cardinals cap on his head ... under.

Schoenfield: I'll go under. If you think about it, three total bases in a random game is unlikely. That would be 486 total bases over 162 games. Nobody has ever done that -- the record is 457 by some guy named Ruth. So, yes, under.

The Mets and Cardinals match up for a series of NL contenders at St. Louis. Which pair of teammates will have more hits in the series -- New York's Michael Conforto and Pete Alonso or the Cards' Paul DeJong and Marcell Ozuna?

Matz: Officially, the Mets belong to Fred Wilpon. But unofficially, Paul DeJong owns them. He's 20-for-53 lifetime against New York, including 14 extra-base hits. Fourteen!!! So I'll take the Cards duo here. (But hit machine Jeff McNeil will have more knocks than all four guys combined.)

Schoenfield: Alonso has slowed down from his absolutely ridiculous start and Jacob deGrom has suddenly proved he's not actually some baseball-throwing robot, so I'll go with the two Cardinals. (After all, Jason Vargas starts Friday for New York.)

Who have you got in Sunday night's matchup of hot young pitchers -- Max Fried and the Braves or Shane Bieber and the Indians?

Matz: In 2018, MAX just barely edged out Bieber on the year-end Billboard charts ("Lights Down Low" finished at 66, seven spots ahead of "No Brainer"). This time around, Bieber comes out on top.

Miller: I'd take Bieber over Fried, but I'd take the Braves' lineup over Cleveland's. So give me Fried's final pitching line.

Schoenfield: I just watched Bieber carve up the Mariners. He's good. Like, really good. So, sorry Braves fans, mark my words, all that matters is Bieber will be your heartbreaker in this game.