NBA report: Foul not called on last-minute steal in Warriors-Pelicans 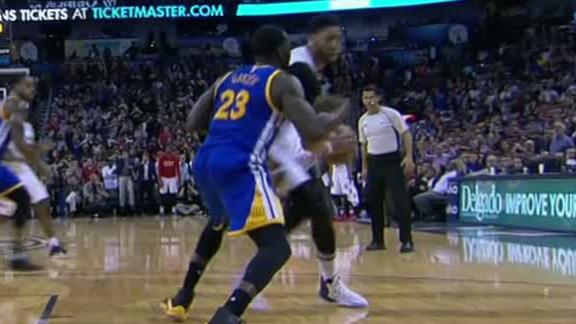 Draymond Green should have been called for a foul on a decisive steal of Anthony Davis with 4.5 seconds left in the Golden State Warriors' 113-109 victory over the New Orleans Pelicans on Tuesday, according to the NBA.

The league's Last Two Minute Report -- which assesses each call made in the final two minutes of any game within five points -- deemed that Green's steal of the ball was legal but that he "puts two hands on Davis' back and bunches his jersey in a hand," which should have resulted in a personal foul. The Warriors were up two, 111-109, when the play occurred.

Davis earned a technical foul -- his second of the season -- while protesting immediately after the call was made.

"It is what it is," Davis said Wednesday after reviewing the game film but before the Last Two Minute Report was released. "Can't do nothing about it now."

Green tweeted his reaction to the NBA's decision.

The Pelicans were held scoreless over the final 4:45 of the game, and they earned just two points on their final 11 offensive possessions.

The call was the only one deemed "incorrect" in the game report, which was released on Wednesday.

The loss marked the Pelicans' eighth in their past 10 games and dropped them to 8-18 on the season. The Warriors lead the NBA at 22-4.