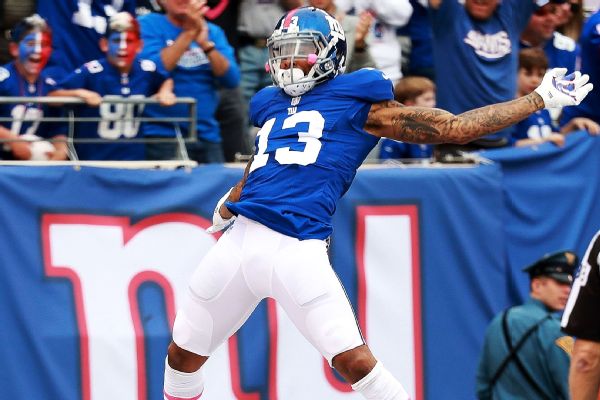 Sunday could have ended on a sour note if the Giants' defense hadn't made one final stop in a 27-23 victory. Beckham was flagged for an unsportsmanlike conduct penalty for taking off his helmet while celebrating on the field after the 66-yard touchdown that gave New York the lead.

The Ravens drove all the way to the Giants' 24-yard line in the final seconds before running out of time.

"I'm very thankful that the penalty on that didn't cost us in the end," Beckham said.

Beckham's winning score with 1 minute, 24 seconds remaining capped a day in which the third-year wide receiver set a career high with 222 yards receiving and two long touchdowns. He had 211 receiving yards and scored both touchdowns in the second half after injuring his hip and missing part of a second-quarter drive.

Beckham wasn't sure if he would be able to finish the game. The hip he landed on while trying to make a second-quarter catch was hurting.

"Whatever it is, it was bad. It was bothering me all game," Beckham said. "Even on the last drive, I told [fellow wide receiver]Roger Lewis, get your mind right because you're going to score the game-winning touchdown.

"I sat there and just prayed. I prayed for strength. He placed his hand of anointment on me and He did. I was able to go out there, get enough adrenaline to make a play and put us in position."

After the touchdown, Beckham proposed to the kicking net on the Giants' sideline. He has incorporated the kicking net into his celebrations since a Week 3 incident in which he slammed his helmet against a net in an outburst that went viral because it recoiled and struck him in the neck.

Beckham got on his back and put the kicking net over him after his first touchdown Sunday.

It didn't start out as a celebratory day for Beckham. He fumbled on his first reception on the Giants' first offensive play of the contest.

The second half was in stark comparison to the first 20-plus minutes, when the Giants didn't record a single first down. Beckham had two catches for 11 yards and an injured hip in the first half. He didn't really get rolling until a 75-yard touchdown off a pass from quarterback Eli Manning late in the third quarter.

"Yeah, that was fun," Manning said. "That's what we expect him to do. We got some looks that we wanted. ... It was good to see him make some big-time plays in crucial moments. There's nothing better than just catching a slant and going whatever it was -- 60 or 70 yards for a touchdown -- to get the game-winning play."

After a slow start to the season, when Beckham didn't score in any of the first four games and had a career-low three catches for 23 yards in a Week 4 loss to the Minnesota Vikings, he has caught three touchdown passes in his past two games. The Ravens couldn't stop him in the second half Sunday.

It didn't help that they lost top cornerback Jimmy Smith to a concussion in the first half.

"Odell made some amazing plays out there. You have to credit him," Ravens safety Eric Weddle said. "We held him down the first half. We had some guys go down. The guys behind them have to step up."

Beckham did most of his damage after the catch. He had 124 yards after the catch, the most by any player this season, according to ESPN Stats & Information.

This was vintage Beckham. It may have even been the best of Beckham.

"The guy had 222 yards. You tell me?" wide receiver Victor Cruz said. "Absolutely. That's what he does. That's what he's accustomed to. That's him in a nutshell."

Beckham flagged for removing helmet on game-winning TD
Already with one long touchdown on the day, Odell Beckham Jr. gets behind the defense again and goes to the house giving the Giants a dramatic 27-23 lead and celebrates with a proposal to the kicking net.