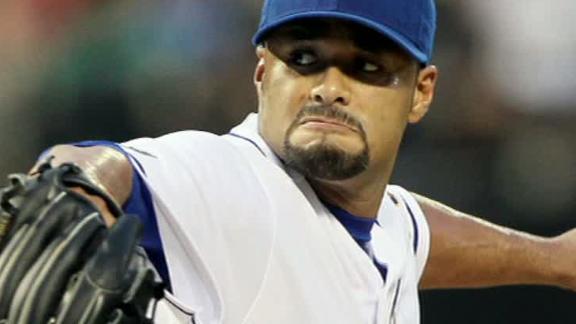 The injury occurred in Florida while Santana was pitching in extended spring training. He was struck by a line drive before stumbling in pursuit of the ball.

An MRI revealed a torn tendon.

"The tendon is severed, and it will in effect end his season," Orioles vice president of baseball operations Dan Duquette said. "I know the rehab is significant for these tendon injuries. We'll have to get with him and speak to him. But he won't be able to pitch for the Orioles this season."

The 35-year-old Santana has not pitched in the majors since 2012 with the New York Mets. The left-hander missed last season after undergoing his second major shoulder surgery, then signed a minor league contract with Baltimore in March.

Santana's return appeared on course when the Orioles purchased his contract from Triple-A Norfolk on Monday and placed him on the major league disabled list.

"He was pitching well," Duquette said. "The last time out he had his velocity and he was able to back-door his slider. I think he had eight strikeouts and no walks, so he was right on schedule. After (Friday), he was going to come up and join the major league team, and we were going to continue the rehab in (Double-A) Bowie."

Now, however, Santana's future is up in the air.

"The skills are there," Duquette said. "He's been able to rehab his arm, but now he's got another challenge."

It was uncertain if Santana could return after his second shoulder surgery, but Duquette thought it was worth taking a chance. Now he and the Orioles are left looking for a Plan B.

"It's unfortunate," Duquette said. "We were looking for Johan's leadership and also his pedigree from being a winning pitcher. Now we'll have to look for that capability somewhere else.

"I was looking at it like a midseason acquisition or trade. We invested in the rehab and we invested in the salary, and of course we wouldn't have had to trade a player. Unfortunately it didn't work. Sometimes you can plan and do things right, and they just don't work out."