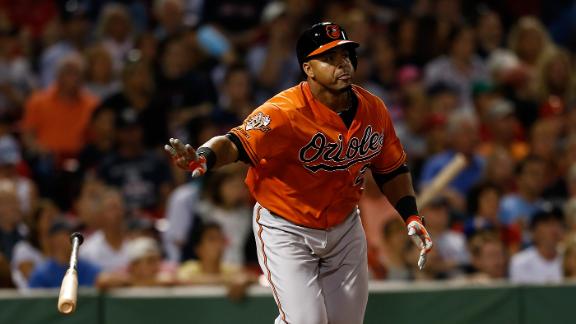 Baltimore Orioles manager Buck Showalter responded to Boston Red Sox pitcher John Lackey's loud "no comment" on slugger Nelson Cruz after Saturday night's game, telling ESPN Radio on Sunday that "everybody needs to make sure that their own backyard is clean" when it comes to performance-enhancing drugs.

Cruz went 5-for-5 Saturday night in the second game of a doubleheader, helping the Orioles beat Lackey and the Red Sox to gain a split of the two games. Cruz had three of his hits off Lackey, including a home run, single and double.

After the game, when asked to comment on Cruz's big game, Lackey made a not-so-veiled comment on the Orioles slugger's past suspension for PEDs.

"I'm not going to comment on him," Lackey said. "I've got nothing to say about him. There are some things I'd like to say, but I'm not going to. You guys forget pretty conveniently about stuff."

Cruz, who was suspended 50 games for violating MLB's drug agreement related to the Biogenesis investigation, signed a one-year deal worth $8 million with the Orioles last offseason. He is hitting .286 with 27 homers and 70 RBIs.

"There's so many insinuations, quite frankly, about people in every club. You usually don't hear those comments after a shutout or something," Showalter said.

"I mean [Lackey's] doing really well. He's up throwing 93, 95 again and he's got one of the top ERAs in the American League, which with the DH means all of baseball. He's a good pitcher, so God bless him. He was good yesterday."

"Considering the timing of things, it's one of those things that you keep quiet about it and it reflects poorly upon the person who said it," Showalter said.

But the manager added that Lackey might want to rethink commenting about other players unless he knows for sure that none of his teammates have used PEDs.