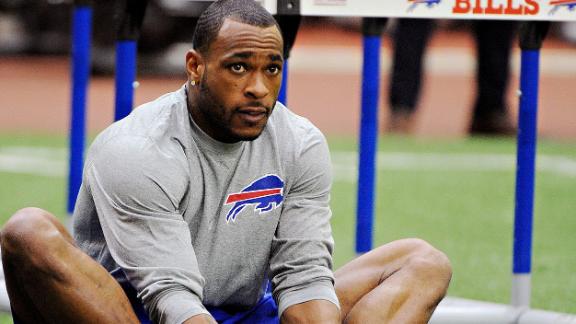 ORCHARD PARK, N.Y. -- Beginning offseason conditioning Monday with his fourth team in four seasons, Buffalo Bills wide receiver Percy Harvin insisted that he would return to his level of play before a troubled stint with the Seattle Seahawks that ended last season.

"The best has yet to come. The world has not seen my best ball yet," Harvin said. "That's why coming in here was so important to me. When I look at the running game and I looked at Sammy Watkins on the other side, me on the other side with Robert Woods, it spelled nothing but success for me."


Harvin was traded to the New York Jets in October after playing in just six games since joining the Seahawks in 2013. Sources told ESPN.com's Terry Blount that Harvin had physical confrontations with teammates and Seattle believed he had become a destructive force in the locker room.


"I just ask people to judge me off what they see, which is what I did in New York," Harvin said Monday. "Which is why you heard nothing. Me and Rex Ryan, we fell in love with each other [and] just that whole staff there. So when I came here, they were excited to have me here.


"So I don't look at the past. I only look at the future. Like I said, the world has yet to see me really explode like I'm about to."


Ryan, in turn, said he's excited that Harvin followed him to Buffalo.


"The thing about Percy, as a player who jumps out at you, he's a matchup nightmare, he has physical talents that you can't take away from," he said.


"The thing I noticed is his work ethic on the field. I don't know if that's as known about him as maybe it should be. You've got to protect him from himself, he goes that hard, he is extremely competitive. I think that's what everybody appreciated about him."


Harvin totaled 51 receptions for 483 yards last season with Seattle and New York. His best season -- 87 catches for 967 yards and six touchdowns -- came in 2011 with the Minnesota Vikings before injuries and migraine headaches cut short his next two seasons.


The Bills' unsettled quarterback situation, which will include a three-way race in training camp between Matt Cassel, EJ Manuel and Tyrod Taylor, didn't concern Harvin in rejoining Ryan and former Jets receivers coach Sanjay Lal with the Bills.


"Not at all. Didn't think about it not once," Harvin said. "All of those guys have talent. ... We just have to come here and put it all together. The best man will win."


Confidence was high around the Bills' facility Monday, with coach Rex Ryan setting a high bar for a team that added Harvin and several other offensive pieces this offseason.


"I'm not afraid. I expect to win. I expect to win big, and I expect to do that right now. There's no reason we can't," Ryan said, before noting the importance of offseason conditioning in building a winning team.


Added Ryan: "They are stacked [offensively]. We have some talent over there. There is no doubt we have some talent. And defensively, that's an outstanding group. Obviously, the numbers speak for themselves, how they played last year. I think our expectation will be set a little higher than that. It's a great group."


Among the Bills' offseason additions was tight end Charles Clay, whom the Miami Dolphins assigned the transition tag. The Dolphins did not match the Bills' offer sheet that included $24 million guaranteed over five years.


"I see our weapons that we have offensively, with obviously, Percy, with LeSean McCoy, with -- as I call him -- Cassius Clay," Ryan said Monday. "That's who I thought we signed with the money we gave him. I was like, 'Cassius Clay, right?' No, Charles Clay, the tight end. He had a great one."