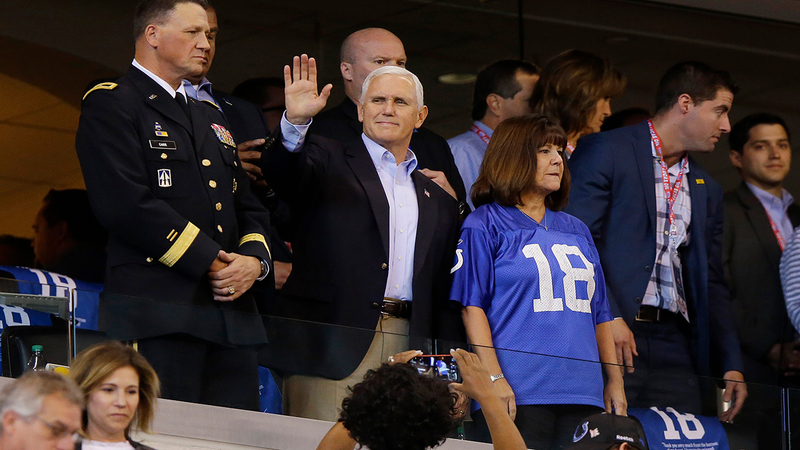 INDIANAPOLIS, Ind. (KGO) -- Vice President Mike Pence didn't even make it to kickoff at Sunday's Colts vs. 49ers NFL football game. He walked out of the stadium in Indianapolis shortly after the national anthem.

Pence tweeted, "I left today's colts game because @POTUS and I will not dignify any event that disrespects our soldiers, our flag, or our National Anthem."

More than a dozen 49ers players took a knee in protest. Some of the Colts linked arms.

"The Vice President of the United States is trying to confuse the message we're putting out there," said 49ers Safety Eric Reid. He thinks Pence planned to walk out. "This looks like a PR stunt to me. He knew our team has had the most players protest. He knew that we were probably going to do it again. This is what systemic oppression looks like. A man with power comes to the game, tweets a couple of things out and leaves the game with an attempt to thwart our efforts."

Pence flew from Las Vegas to Indiana, then flew all the way back across the country to California. He will be in Sacramento Monday.

Congressman Adam Schiff tweeted, "How much taxpayer money was wasted on this stunt?"