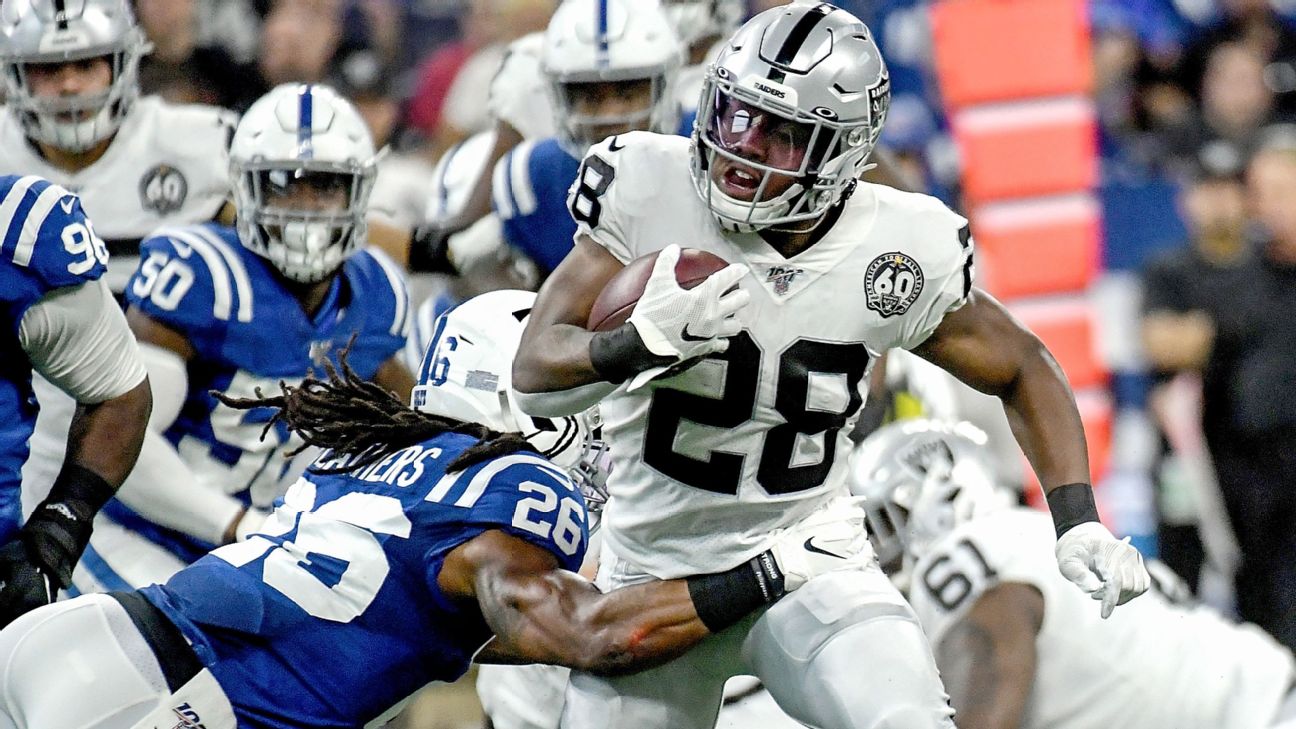 ALAMEDA, Calif. -- Josh Jacobs was officially listed as questionable to play Sunday at the Houston Texans after missing two practices this week and being limited Friday with a right shoulder injury, but the Oakland Raiders' rookie running back plans on suiting up.

"It would have to be broke for me not to play," Jacobs said this week in the Raiders locker room. "That's what I told [the coaches]."

Jacobs, who leads all NFL rookies with 554 yards rushing and is averaging 5.1 yards per carry with four touchdowns, was dinged up on his first carry last weekend at the Green Bay Packers when he ran over safety Adrian Amos.

"It was just a funky way I hit him," Jacobs said as he rubbed his right shoulder with his left hand. "I didn't have a lot of stability behind it. So I just did it to myself, honestly."

Jacobs stayed on the field for that first drive, but came out and went into the locker room after breaking off a 42-yard run on the third play of the game. He received a pain-killing injection and finished with a career-high 124 yards rushing on 21 carries and caught three passes for 10 yards -- just one game after he gashed the Chicago Bears for 123 yards in London.

"We expect him to play,"Raiders coach Jon Gruden said this week, "but we'll have to see how it goes."

Asked how much pride he took in returning to the Packers game despite suffering what he initially thought was a stinger, Jacobs laughed.

"I like to play," he said. "I like to compete. It was in a point in the game where we were still competing, trying to win. So the biggest thing for me was trying to get back on the field as soon as possible."

Jacobs, the No. 24 overall pick, has already passed Bo Jackson for most rushing yards in franchise history through a player's first six games, as well as tying Marcus Allen for most 100-yard rushing games (two) in a player's first six games. Jacobs is 144 yards away from breaking Allen's single-season Raiders mark for a rookie; Allen rushed for 697 during the strike-shortened 1982 season. Allen did that in nine games and while he scored 11 TDs, he averaged 4.4 yards per carry, almost a yard less than what Jacobs is averaging now.

The Texans boast a defense that has allowed just 84.3 rushing yards per game, tied for third best in the NFL.

"That dude is incredible," Waller said. "With his energy out there, the way he's running the ball, it's like, OK, I've got to match that. I can't have him out here being by himself. I'm trying to make plays with him. I feel like we all take on that attitude and let him be featured because that dude is the real deal."

Pro Football Focus has more than 75 percent of Jacobs' yards coming after first contact. Among running backs with at least 50 rushes, he leads in yards after contact per attempt (3.9) and his missed tackles forced (31) are tied for second in the league, according to PFF.

"I honestly don't know," Jacobs said when asked to explain getting so much yardage after first contact. "People ask me that all the time, even like, friends and things like that. I don't know. When I'm playing, the game kind of slows down for me. I [see] a lot of things in film, I don't know how I did it. So I guess it's just God-given talent."

"I tell people all the time, it's easy to run behind that line," Jacobs said. "We just trust each other."

If Jacobs is a scratch in Houston, expect DeAndre Washington, who is averaging 3.6 yards per carry, to fill Jacobs' role, with Jalen Richard as the change-of-pace back.

"They taught me how to be a pro, how to approach things and all that kind of stuff and they know it's a long season," Jacobs said. "They know we're going to need everybody, so they're just patiently supporting me and when they get their opportunity, I'll support them." 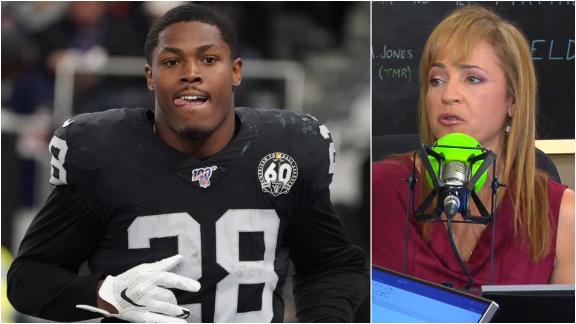