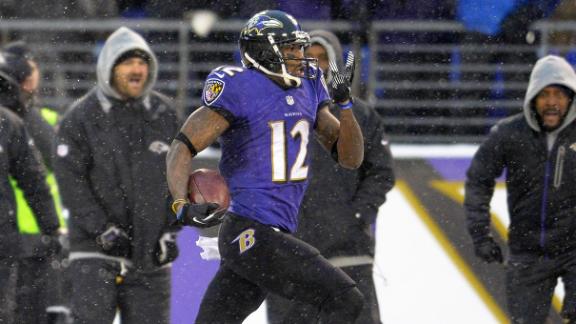 The Baltimore Ravens cut receiver-returner Jacoby Jones on Wednesday after a difficult season for the former Super Bowl hero.

Jones, 30, dropped five passes as a receiver and muffed two punts in 2014, and the Ravens decided to avoid paying his $2.5 million salary for the 2015 season by cutting him. The Ravens would save only $750,000 of cap space by releasing Jones unless they designate him as a June 1 cut.

Despite his struggles, Jones was one of two players to rank in the top 10 last season in both kickoff and punt returns. (Cincinnati's Adam Jones was the other.) Jones finished second in the NFL in kickoff returns (30.6-yard average) and returned a kickoff 108 yards for a touchdown at Pittsburgh.

"We thank Jacoby for what he did for us," coach John Harbaugh said. "He was invaluable to our success. Opponents, especially on special teams, schemed to stop him. What a compliment to him."

"Jacoby is one of my most favorite players ever to coach, an absolute joy to be around," Harbaugh added. "He's a good person with a good heart."

Jones made little impact as a receiver last season, catching his fewest passes (nine) since 2008. He dropped too many passes and quickly lost his job as the No. 3 receiver.

It was only two years ago when Jones helped the Ravens to a Super Bowl title. He caught a 56-yard touchdown pass and scored on a 108-yard kickoff return in the Ravens' 34-31 victory over the San Francisco 49ers. Earlier in that title run, he caught a 70-yard touchdown pass with 44 seconds left against the Denver Broncos that helped force overtime in a 38-35 divisional-round victory that sent the Ravens to the AFC Championship Game.

"We don't win Super Bowl XLVII without Jacoby," general manager Ozzie Newsome said. "You immediately think of the touchdown against Denver in the divisional round and then the big plays in that Super Bowl -- the long touchdown from Joe [Flacco] and the kickoff to open the second half. He also had a big punt return in that game. Jacoby was an outstanding Raven, good teammate on and off the field."

The Ravens cut Jones one year after re-signing him to a four-year, $12 million deal. Jones said he returned to the Ravens even though he received a better offer from the New York Giants.