Rex Ryan: Only King Kong could cover Gronk 1-on-1 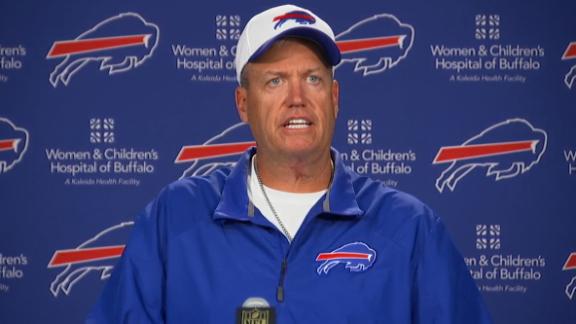 ORCHARD PARK, N.Y. -- Rex Ryan won't reveal which member -- or members -- of the Buffalo Bills will be assigned to cover New England Patriots tight end Rob Gronkowski, but Ryan said Wednesday that it'd be a superhuman task for just one player to do it.

"We're not going to ask one guy to cover him," Ryan said. "Yeah, he'd have to look like King Kong."

Ryan said there could be as many as three players assigned to Gronkowski on some snaps when the Bills host the Patriots on Sunday.

"He's hard to cover," Ryan said. "He's going to make catches. You just don't want him to go off on you for three touchdowns or whatever. He's as good of a tight end as there is in the league. He's pretty good."

It's not the first time this week that Ryan has made a movie reference when speaking about Gronkowski. On Monday, Ryan called Gronkowski a "hell of an actor" when praising the Patriots' star tight end.

In his past three games against Ryan-coached defenses, Gronkowski has caught 19 passes for 213 yards and one touchdown.

"Obviously you don't just put one guy on this guy. That's been proven," Ryan said later Wednesday in a conference call with reporters covering the Patriots. "I will say this, it's better to put one guy on him than nobody on him. We'll try to have somebody on him, at least."

Rex Ryan believes Gronk will be a challenge, even if King Kong was on him
Buffalo Bills coach Rex Ryan discusses covering New England Patriots TE Rob Gronkowski as well as how playing the Patriots is a personal challenge for him.