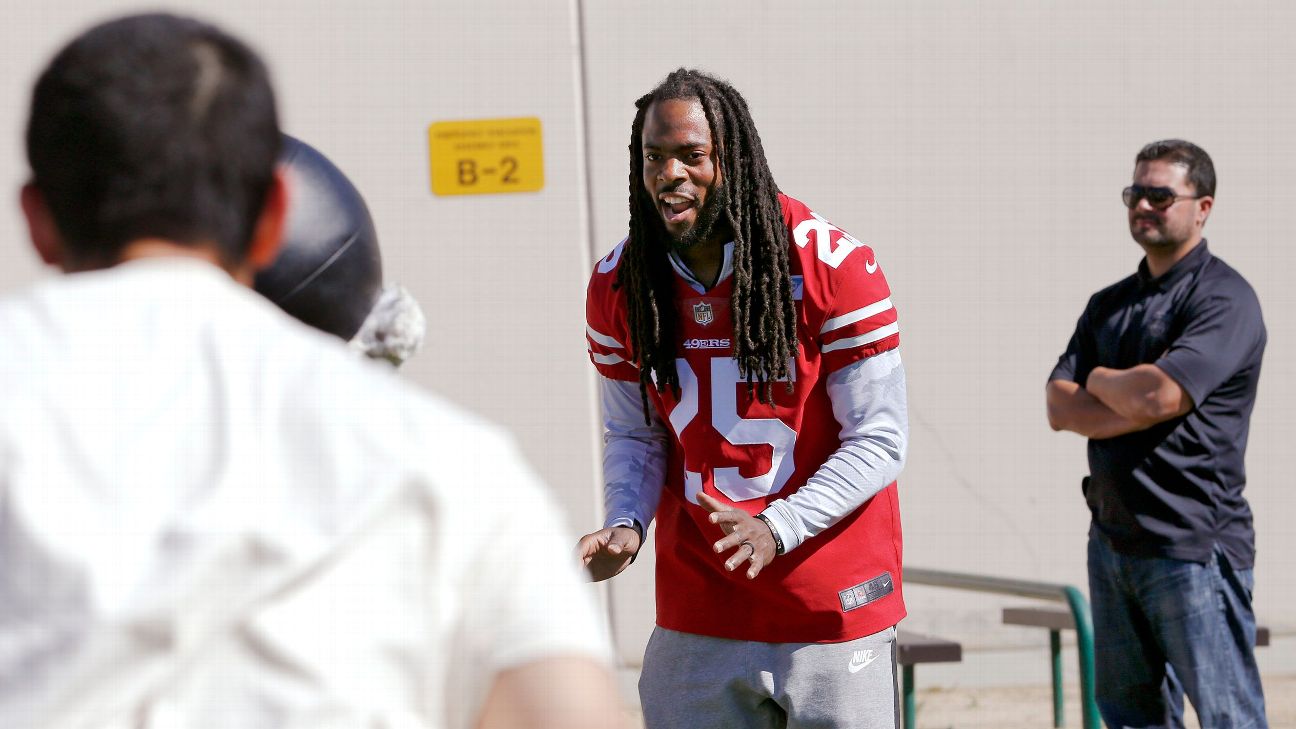 SAN JOSE, Calif. -- The feeling-out period is over and San Francisco 49ers cornerback Richard Sherman leans forward in his chair, taking care to make eye contact with each of the 20 kids as they listen with rapt attention.

It's time for Sherman to get serious with the kids, who are serving time in unit 1B at the Santa Clara County Juvenile Hall. He's been talking for about 15 minutes, with each side slowly easing into real conversation.

The questions come slowly, ranging from what sport Sherman would have played if not football (track) to whether he plays Madden (he's more of an NBA 2K guy) to whether it hurts to tackle someone (not usually, but a recent stinger against the Los Angeles Rams earns mention) to what his first purchase was when he signed his NFL contract (a 2011 BMW 745).

The next question comes from one of the adults in the room, asking Sherman how he made it through his own difficult times. He begins describing what it was like to grow up in South Central Los Angeles and the dangers that awaited outside of his family home. He tells the young men, all between 13 and 17 years old, about how he kept his focus on school work and realized early things wouldn't come easily.

Sherman is just getting warmed up, when he sits up and gets to the heart of his message: "You get 24 hours in a day," Sherman says. "And I guarantee you that you all understand the importance of every minute of 24 hours right now. When you get free and can control your own destiny, take advantage of every minute and every second of the 24 hours. When you get it back, never give it back to anybody. Live your life to the fullest."

'A million forks in the road'

Although he grew up in a loving, tight-knit home with parents working hard to put food on the table, Sherman's childhood was spent just north of Compton, known as one of the roughest cities in greater Los Angeles. Sherman's daily life included regular encounters with gangs and opportunities to go down the wrong road.
"There's been a million forks in the road throughout my life," Sherman said. "Just because that's what you're constantly around. Temptation at every turn."

Sherman's parents instilled in him what he calls the "fundamental values" -- to not take the wrong path when those forks present themselves.

As a teenager, one of Sherman's closest friends got involved with a gang. As his friend was preparing for his initiation, he began to worry about what was to come. He tried to get Sherman to join him, an idea Sherman rejected.

Sherman says he pleaded with his friend to back out. He didn't. A few years later, when Sherman was a freshman at Stanford, that friend was killed in a drive-by shooting.

"He made that decision," Sherman said. "And, you know, those are the situations where you remember them your whole life."

That experience, as well as a memorable visit from Magic Johnson to Sherman's Dominguez High in which Johnson emphasized the importance of setting and achieving goals, helped Sherman become a potential Hall of Famer with a communications degree from Stanford and the ability to take care of his family.

Those days alsoshaped Sherman's world view and factor in to every decision he and his wife, Ashley, make when figuring out how they can use their platform to help others.

Ashley Sherman runs Blanket Coverage, the Sherman Family Foundation. She said she talks with Richard at least once a day about where they should concentrate their time and resources. Those conversations often lead them back to helping young people in need by providing school supplies and clothing for students in low-income communities.

It led them to Santa Clara County Juvenile Hall.

"It's always things that we're both passionate about, that we can relate to," Ashley Sherman said. "And you know, the ones we can't relate to, we always try to find a way to still help because those kids are still important to us because no one has really taken the time to hear their story. We want to be those people. We care. We're here, tell us your story. How can we help?"

After each of the 49ers' victories the past few weeks, Sherman has stepped to the podium for his postgame news conference and preempted questions by sending a shoutout to the kids in unit 1B.
The unit is one of six in the facility and at any given time houses between 11 and 26 young people separated by gender. The male wings are separated by age and type of offense committed.

Each day includes a full day of school from 8 a.m. to 3 p.m., followed by programs such as Fresh Lifelines for Youth (FLY), a nonprofit that works on "breaking the cycle of juvenile violence, crime and incarceration." FLY is a nearly two-decade community partner of the 49ers, coming in to work with the kids on things like anger management and substance abuse counseling.

"Often, our young people are here because they have been let down repeatedly by adults and have ended up in situations where they've made choices, sometimes out of survival, sometimes because they're dealing with the system that we know has inherently a lot of biases and challenges and they don't have a way through," said Christa Gannon, FLY's executive director and founder. "So, any adult we introduce them to has gotta be a positive one that's going to live up to their word and is going to help them through this."

A few weeks ago, Sherman approached the Niners' community-relations team and asked how he could get involved with some of the area's troubled youth. He was quickly connected to the group at the juvenile hall and FLY.

Soon, Sherman found himself sitting with the kids in 1B, talking about anything and everything and promising to bring them a copy of NBA 2K20 if he got positive reports on their behavior before his next visit.

And when Sherman and 11 teammates arrived at the facility on Oct. 22 for another visit, he had a copy of the game in hand.

"What Richard Sherman did was gold for these kids," said Nick Birchard, deputy chief probation officer. "He said he would do it. He did it. And they're completely happy with that, because they're just used to that not taking place. They're used to being disappointed by adults, whether it's their family, or whatever that looks like."

'It's important to not give up'

On this warm Tuesday afternoon, Sherman and his teammates break into groups and spend an hour talking to kids in each unit. From there, they head outdoors to a grass field for football drills, using the physical activity as an example of how to manage anger.
During the group chat in 1B, the kids are asked about the best way to deal with angry moments. Alternatives like listening to music, taking a deep breath and playing sports are mentioned. The room goes quiet when one of the young men raises his hand and offers the most insightful response of all.

"Think about what you've got to lose," he says.

Sherman smiles, nods his head and picks up on the cue. His faith in the group has been reinforced.

"It's important to not give up on these kids," Sherman said. "Coming from where I'm from you understand that kids make mistakes. And sometimes these mistakes are more serious and more egregious. But I want them to know that there are people that care about them, people that still believe in them, and people that believe they can turn their lives around."

As Sherman wraps up this visit, he promises to upgrade their television if everyone meets certain goals and takes care of their business. He's asked for some jerseys and says it's possible as long as they're good with his red No. 25.

One young man even asks about getting some Uggs, Sherman's comfortable shoe of choice, for the whole group. Sherman laughs and tells them they aren't ready for that.

Sherman turns it over to Ashley, who echoes her husband's message and suggests taking advantage of the resources provided by FLY and other organizations that work closely with the facility. She suggests journaling as a means to "write your own story."

Before he departs, Sherman offers one final message, telling the group their mistakes don't define them.

Sherman closes by saying he'll be back. In unison, the kids clap and thank Sherman for coming, confident that they'll see him again. Soon. 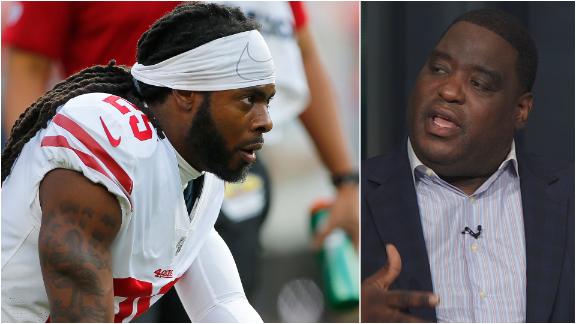