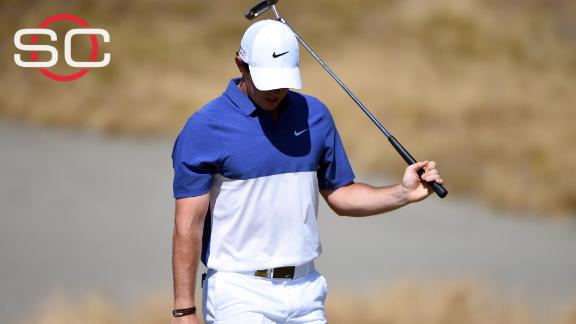 Rory McIlroy's bid to defend titles at each of the year's final two major championships might have reached a major hurdle this past weekend.

McIlroy announced Monday that he suffered a total rupture of the ATFL -- the anterior talofibular ligament, and the one most commonly sprained -- in his left ankle while playing soccer with friends Saturday. He posted a photograph on Instagram with his leg in a boot as he balanced on crutches.

"Continuing to assess extent of injury and treatment plan day by day," the world's top-ranked golfer wrote. "Rehab already started. ... Working hard to get back as soon as I can."

For McIlroy, the left ankle is crucial in his golf swing as weight shifts to that side while generating power.

His spokesman, Sean O'Flaherty, said McIlroy would miss the Scottish Open, which starts Thursday at Gullane. O'Flaherty said the team would not know until the end of the week the prospects of McIlroy teeing it up at the Open Championship, which begins at St. Andrews on July 16.

McIlroy had been the favorite at St. Andrews at 5-1, but he fell to 8-1 on Monday morning after his injury was announced, according to the Westgate Las Vegas SuperBook.Jordan Spieth, meanwhile, went from 6-1 to 9-2 and is now the betting favorite. The 21-year-old Texan goes to the Open Championship as only the fourth player with a shot at the modern Grand Slam.

Ben Hogan in 1954 was the last Open champion who did not play the following year.

"Unlucky, obviously," Luke Donald told The Associated Press. "I would never say, 'Don't play football or don't do these thing.' You don't want to live in a bubble. It's just unlucky timing, especially this time of the year. Golf is exciting with Rory and Jordan. It's added a bit of spice to the game. It's a shame if Rory were to miss the Open, which it looks like he might."

Said former Ryder Cup captain Sam Torrance:"That's a big blow to the Open if he misses it."

McIlroy won the Open last year at Royal Liverpool by going wire to wire and taking a 6-shot lead into the final round. He also won the PGA Championship, joining Jack Nicklaus, Tiger Woods and Bobby Jones as the only players in the past century with four majors at age 25 or younger.

Impact of Rory's injury on his game
Dottie Pepper discusses how Rory McIlroy's left ankle injury will affect his game and who becomes the favorite at the Open Championship if McIlroy can't play.

Timetable for McIlroy's return
Stephania Bell discusses the recovery time for Rory McIlroy, who ruptured a ligament in his left ankle while playing soccer with friends.