Sherman: Hopes son does him 'favor' 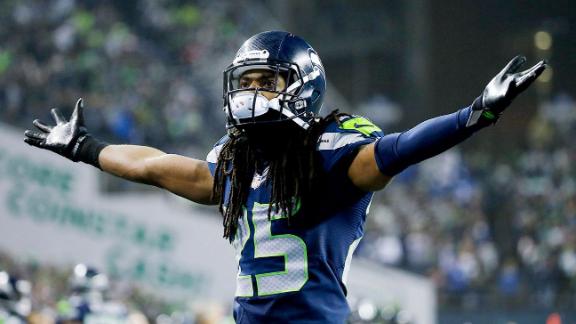 PHOENIX -- Seattle Seahawks cornerback Richard Sherman was asked Thursday what he will do if his son is born on Super Bowl Sunday.

Sherman's girlfriend, Ashley, is due to deliver their first child sometime in early February. She is having a boy and is in Arizona for the Super Bowl. It's possible, of course, little Sherman could arrive Sunday.

One reporter asked Sherman about a national debate on what he should do if that happens.

"That's a topic of debate?" Sherman asked. "I'm focused on the game. He's not supposed to come on Sunday. If he does, that would change some things. I've thought about the possibility of his coming during the game or coming before the game.

"We have things in place in case that happens. We'll cross that bridge when we get there. But I didn't know it was a topic of national debate, honestly. I would not like to miss the birth of my first kid, but hopefully and God willing, we won't have to cross that bridge."

Sherman was coy when asked the name they have chosen: "I guess we'll find out if he comes on Sunday."

Seahawks quarterback Russell Wilson thinks it would be extra incentive for Sherman to play well if the baby is born Sunday.

"That would be a special birthday," Wilson said. "If Richard's son is born on Sunday, I would be so happy for him. I know he would have a great game. I know if I'm Tom [Brady], I'm not throwing his way if [Sherman's] son is born on the same day. Richard will want to make some extra plays for him. But I'm excited for him. Richard will be a great father."

Sherman also was asked, in light of the problem with concussions in football, if he was OK with his son playing the game.

"Oh, 100 percent," he said. "Football probably will be the first or second sport he plays. People talk about the negative aspects of football, but there also are a lot of positives you learn as a kid. I don't know many 7- and 8-year-olds in Pop Warner are running into each other full speed and getting concussions. Kids aren't brave enough at that age.

"But football teaches you discipline and helps you develop a sense of leadership and courage and camaraderie with your friends and teammates. It shows you how to work with a group and how to depend on one another, how to trust someone to do their jobs and how to be dependable in your job. These are things you learn that are essential throughout your life."

Sherman said he wouldn't be the person he is today without playing football as a kid.

"I don't know how social I would have been without football,'' Sherman said. "I wasn't the coolest kid around, but I always had 20 or 30 friends who were teammates and we spent so much time together.

"We never focus on the good things [about football]. There are so many things that can happen in any sport. In [college] basketball a couple of years ago, a guy [Louisville guard Kevin Ware] had his leg [bone] tear out of his skin. Crazy things happen, but a lot of positives come out of playing this game."