Stan Wawrinka out in first round 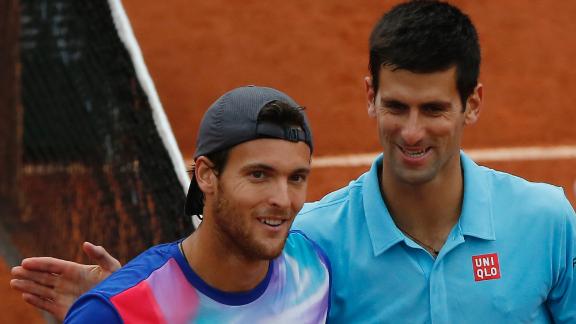 PARIS -- Australian Open champion Stan Wawrinka lost in the first round at the French Open on Monday, surprised by Guillermo Garcia-Lopez of Spain 6-4, 5-7, 6-2, 6-0.

The third-seeded Wawrinka was playing his first Grand Slam match as a major champion, but he faded against his 41st-ranked opponent.

Surprisingly, he looked listless. More stunningly, he looked very little like a guy who was seeded No. 3 behind Rafael Nadal and Novak Djokovic and proclaimed himself "one of the favorites" just a few days earlier.

"The match wasn't good at all," Wawrinka said. "I don't have an answer why I didn't play that good."

Wawrinka, who had 61 unforced errors and won only 54 percent of the points on his first serve, is the first Australian Open champ to exit in the first round of that year's French Open since Petr Korda in 1998.

Garcia-Lopez has never been past the third round at a Grand Slam tournament.

Wawrinka was a quarterfinalist at Roland Garros last year, and he won a clay-court title at Monte Carlo last month, beating pal Roger Federer in the final. Wawrinka and Federer won a doubles gold medal together for Switzerland at the 2008 Beijing Olympics.

Other major champions fared better, as Nadal earned his 60th victory in 61 matches at the French Open, while Djokovic played through some rain and some rain delays before reaching the second round.

The top-seeded Nadal beat Robby Ginepri of the United States 6-0, 6-3, 6-0, playing his opening match on Court Suzanne Lenglen, the second-biggest stadium at the French Open.

"Always the same: To win against anyone, I need to play at a good level, and I need to be ready for fight and for everything that I will need to do to win," Nadal said, looking ahead to his next match. "And with that I can see I need to be aggressive and need to find a rhythm on the legs and play solid points, find real ways to win the points. That's it."

Nadal has won eight titles at Roland Garros, with his lone loss at the tournament coming in the fourth round in 2009. If he wins this year, he will become the first man to win five straight at the clay-court major.

Djokovic was leading 4-1 when rain halted play on Court Philippe Chatrier, but it restarted about an hour later.

"Very heavy conditions. The court is not that great, in a great condition, at this moment," Djokovic said. "But of course, considering the amount of the rain that we had in last four or five days, it is not easy for people to maintain the court in the right state. They are doing their best."

In the second set, a short shower stopped play for only a few minutes, but Djokovic used the time to entertain the crowd by chatting with a ball boy and letting the youngster sit alongside him on the bench.

At one point, Djokovic grabbed the umbrella out of the ball boy's hand and in return gave him a racket. Then Djokovic handed him a bottle of Perrier, and the two clinked bottles before taking a sip.

"We had a nice chat. He's a tennis player, so I asked him how long he's playing, and how he's enjoying his time as a ball kid," Djokovic said. "It was a nice, fun time, something unusual for the Grand Slams."

Djokovic, the 2012 runner-up, was broken three times by Sousa, including while serving for the match. He can complete a career Grand Slam by winning the French Open.

Not as lucky was Kei Nishikori of Japan, who lost his first-round match.

Nishikori came into the tournament after winning his first clay-court title in Barcelona last month and then reached the final in Madrid, losing to Nadal.

Nishikori, the highest-ranked Japanese man in history, is No. 10 in the world, one spot lower than his career high.

"Really disappointed," said Nishikori, who has been getting coaching help from 1989 French Open champion Michael Chang.

"I mean, I didn't have much practice. So, you know, I knew this is going to happen," Nishikori added Monday. "I was playing well on clay in Europe, so it's very sad for me to lose first round here."

Nishikori, 24, was forced to pull out of the final of the clay-court Madrid Open against Nadal on May 11 because of a problematic lower left back, ending a 14-match winning streak that included a title on clay at the Barcelona Open.

"First time playing points after Madrid, so I didn't have much rhythm," Nishikori said after losing to the left-handed Klizan. "And also serve -- I didn't hit any serve 100 percent before today."

Monday's victory was only the second of Klizan's career against a top-10 player.

"I just saw a little bit, sometimes, he was touching [his] back when he was serving," said Klizan, the 2006 French Open boys' champion. "I think in the rallies he played very solid tennis."

No. 17 Tommy Robredo of Spain, No. 25 Marin Cilic of Croatia, No. 26 Feliciano Lopez of Spain, No. 27 Roberto Bautista Agut of Spain and No. 29 Gilles Simon of France advanced, while No. 30 Vasek Pospisil of Canada lost.

Djokovic Cruises Into Second Round
Novak Djokovic beat Joao Sousa 6-1, 6-2, 6-4 to advance to the second round of the French Open.

Nishikori Ousted In First Round
No. 9 seed Kei Nishikori fell to Martin Klizan in the first round of the French Open.