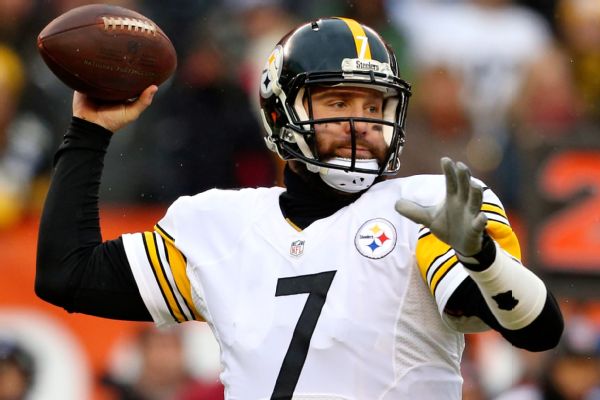 Pittsburgh Steelers quarterback Ben Roethlisberger could miss four to six weeks after having surgery for a torn meniscus in his left knee, sources told ESPN on Wednesday.

The sources said Roethlisberger and the Steelers were informed of the timetable by orthopedic surgeon Dr. James Bradley based on what the doctor saw when he performed the arthroscopic procedure Monday.

"Doc says my knee looked good, but there still was some stuff in there from when I had my bone bruise last season in St. Louis," Roethlisberger told the Pittsburgh Post-Gazette on Tuesday. "He said that might keep me out a little longer than just a simple meniscus tear. Maybe an extra week or so. But there's no way to put an exact timetable on it. It all depends on my pain and how I feel."

Roethlisberger originally was told to expect to miss two to three weeks, sources said, but the post-surgery prognosis broadened that window. However, as a team source said, Roethlisberger has defied odds before when dealing with injuries.

The Steelers on Tuesday said Roethlisberger would not play Sunday against the New England Patriots and were cautiously optimistic that he could return after the bye week for a matchup against the Baltimore Ravens in Week 9.

Roethlisberger suffered the injury in the first half of Sunday's game against the Miami Dolphins. He missed one series and then returned to play the entire second half, finishing 19-of-34 for 189 yards, one touchdown and two interceptions.

Steelers coach Mike Tomlin has declined to put a timetable on Roethlisberger's return, but the quarterback told the Post-Gazette he was told to do the first week to 10 days of rehab at home.

"When he is healthy, he'll be back with us," Tomlin said Tuesday.

Landry Jones is taking all snaps with the first-team offense and will start Sunday against the Patriots.

"I have to go in this week to see the guys. I'll call Landry [Jones] and check in with him," Roethlisberger told the Post-Gazette. "I want to do everything I can to help him. I just hope coach lets me be on the sideline Sunday."

Landry Jones ready to cut it loose
ESPN Steelers reporter Jeremy Fowler talks about the mindset of QB Landry Jones, who said he wants to be cautiously aggressive as he fills in for Ben Roethlisberger.