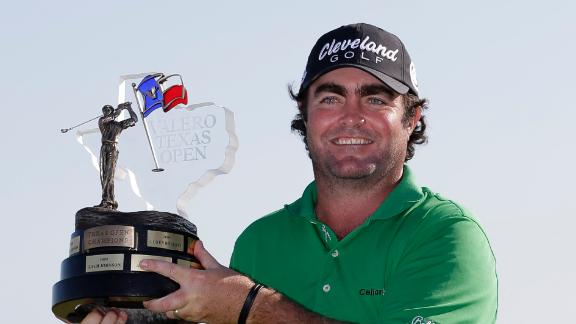 SAN ANTONIO -- Steven Bowditch held on to win the Texas Open in windy conditions Sunday for his first PGA Tour victory and a spot in the Masters.

"I'm over the moon. I really can't believe it," said Bowditch, who attempted suicide in 2006 and has fought depression throughout his career.

It was the highest closing score by a winner since Vijay Singh finished with a 4-over 76 in the 2004 PGA Championship, and the highest in a non-major since Fred Couples had a 5-over 77 in the 1983 Kemper Open.

"Every time I got out of check, looking ahead to the Masters and winning golf events and making my speeches before I was finished, I had to pull myself in check every time," said Bowditch, wearing a green shirt. "And it happened a lot today."

Bowditch, based in Dallas, entered the week 339th in the world and had only two top-10 finishes in eight years on the tour. He won once on the Australasian circuit and twice on the Web.Com Tour.

"He's been a battler. He's gone through a lot in his life," said John Senden, a fellow Australian who won the Valspar Championship two weeks ago.

Senden waited about an hour after his round to shake Bowditch's hand.

"That last putt wasn't his best, but to finish it off he was as cool as a cucumber really," Senden said. "I'm proud to be his mate."

Chesson Hadley and Ryan Palmer missed chances to get into the Masters through the top 50 in the world ranking. Hadley, the Puerto Rico Open winner, needed at least a sixth-place finish, but closed with an 80 to tie for 56th at 5 over. Palmer needed a top-three finish and had an 82 to also tie for 56th.

On the par-3 16th, he got up-and-down after missing the green. He pushed his drive on the par-4 17th, hit his approach on the green and two-putted, then pulled his tee shot left on 18, recovered with a shot to the fairway and reached the green in three.

"I just drew back on some experience," Bowditch said.

MacKenzie made a 13-foot birdie putt on the 17th to pull within a stroke of Bowditch, but the Australian tapped in from 2 feet for his birdie at No. 14 to push the advantage back to two.

Matt Kuchar and Andrew Loupe shot 75s to tie for fourth at 6-under.