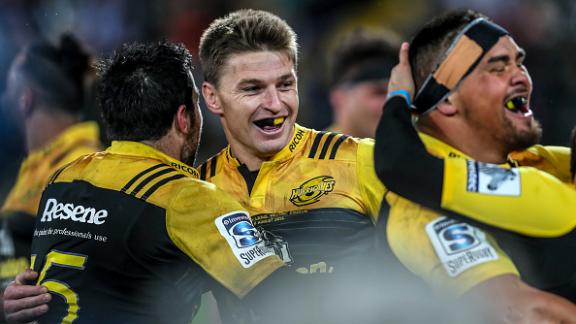 Super Rugby must embrace an American attitude for the future - but don't expect that to include a United States franchise anytime soon.

That's the message out of SANZAAR after officials confirmed they would retain the controversial Super Rugby draw in its entirety for 2017, with just the South African conferences swapping crossover fixtures between Australia and New Zealand as originally planned.

That result is likely to be met with a mixed response across the competition's stakeholders, and the fans, after the 2016 season created confusion and had its overall integrity questioned.

Much of that reaction was down to the conference-based format and the awarding of home finals to the four conference winners despite three New Zealand franchises having legitimate cause for a home quarterfinal.

The response to that from the competition's administrators was simple: It's time southern hemisphere rugby supporters adopted America's attitude to conference style sport.

"I think one of the mindset shifts that we need to do better, all of us, is to break away from the traditional rugby format," SANZAAR Operations Manager Brendan Morris said at an Australian media briefing on Monday.

"We're so used to in Australia, we play each other home and away, and that's the only way you can do competition structures. Nobody ever says to the Seahawks, 'oh you didn't play Dallas Cowboys this year and you won the Super Bowl, so how could that be an [integrous] competition?'.

"Americans grow up with conference-style sport and they're just so used to it that they don't even look any more about who's in the eastern conference in division X. I go, 'where are my Dallas Cowboys, who have they got next week and where do they sit in their conference?'. Because I know if they win their conference it doesn't matter what else happens they're going through to the playoffs."

While Super Rugby's rusted-on supporters may long for the simple, compact days of Super 12, the reality is that Super Rugby, if it is to retain its mantle as the game's premier provincial competition, must continue to develop new revenue streams as a means of combating the massive amounts of money on offer in Europe.

That was achieved this year with the introduction of the Sunwolves (Japan) and Jaguares (Argentina), and the return of South Africa's Southern Kings, taking the competition to 18 teams.

With thousands of kilometres and 15 timezones separating the five countries -- the Sunwolves played three games in Singapore -- the logistics of travel, cost and player welfare meant Super Rugby had to delve deeper into the depths of conference-style sport.

"Super Rugby went conference style in 2011; it was the first real breakaway from that regular home-and-away fixture where we played everybody and it was due to, as you said, 15 timezones," SANZAAR chief Andy Marinos said.

"You just, you break everybody by going back to the round-robin format. If it's important to the competition that we have the Argentinas and the Japans, and the South Africans and the Australians and the New Zealanders; if we want a truly global competition then round robin is disappearing pretty quickly. And that's without even looking at further expansion in five, 10, 20 years' time.

"What we've got now is a reality that we're going to break the people [who] are playing the game by making them sit on planes more than they're on the field. So when we made a conscious decision to grow the competition, the conference style really is about the only way you can do it sustainably without breaking people."

Overall, SANZAAR reported positive feedback from most of the game's major stakeholders with a global audience of 50 million watching on television and a further two million going through the gates. For the broadcasters, the addition of the Sunwolves and Jaguares added a "freshness" to the competition even if some of their results weren't up to standard.

Still a bold push into the United States doesn't appear to be on horizon anytime soon, despite the game's administrators facing the reality of a continued player drain to Europe -- brought about by big-money television deals.

'Can you tell us how to get in, because everybody thinks the pot of gold is there and in the last 20 years no-one's been able to find it," Morris said.

"I think conceptually everyone thinks the United States is this great emerging market that everybody's desperate to get into; I think if you look in the media Pro12 are talking to them at the moment, All Blacks are taking another game up there this year, and the Maoris. So there's certainly a lot of development going in there."

While admitting the States represented an attractive option for SANZAAR, Marinos said the governing body wouldn't be rushing into the market despite its obvious financial opportunities.

"There's a lot of activity but I always liken the States to Argentina," he said.

"SANZAAR started its engagement with Argentina in 2007-2008, and that's an established rugby market; in saying that, professionalism wasn't embraced completely ... but it had a long rugby heritage and history, and they were competitive. From 2008 till they came into Super Rugby it's eight years.

"Yes they came in at international level first, but they have been competing internationally and been at the table, they were semifinalists in 2007 at the World Cup; but that was a long process and that was setting high-performance structures, getting their Pampas team which is now their Pumas team, playing in the Vodacom Cup in South Africa, and they did that for four years, won it in the second year, finalists in their third year. So it was a process in order for them to be ready to compete in our competition structure.

"So my view is that America is a big market and there's a huge amount of opportunity, but you've got to get in there and you've got to strategically invest and build sustainability over a period of time so that when they do compete at the main table, they are competitive and they can continue to add value because that's the way you are going to pull supporters and the public in America, and the stakeholders in America, along because everyone wants to see a winner or a successful or competitive team.

"So I think that's how I see North America; it's part of an ongoing development and investment for the long term."