The star extensions that matter in NBA free agency 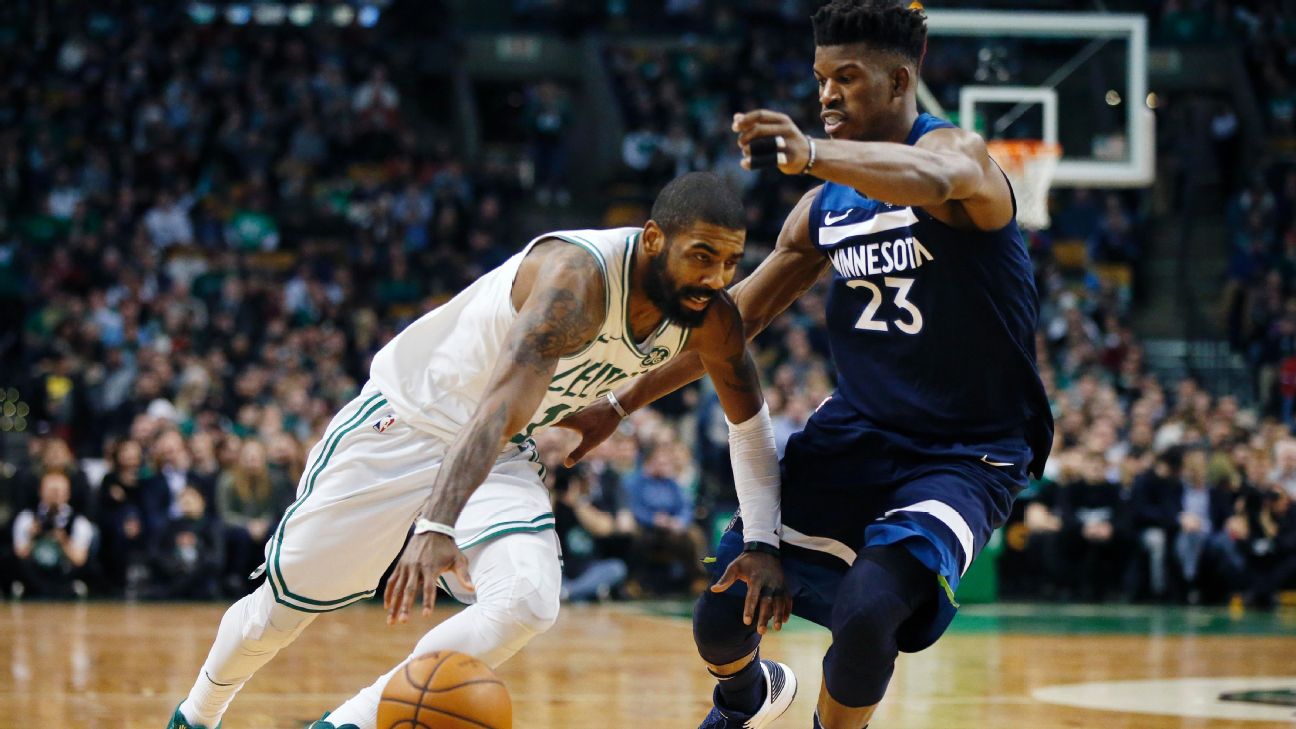 With this summer's financial crunch and a potential market reset in 2019 if the cap jumps from $101 million to $108 million, will players and teams maintain flexibility or lock down long-term contracts?

Let's look at all the major decisions facing All-Stars, rising rookies and their teams, plus their effect on potential trade talks.

Kyrie Irving has made it known that a four-year, $107 million extension is a non-starter when it comes to a new contract to remain in Boston (as it should be). That total guaranteed compensation is $80 million less than what Irving can sign for with the Celtics in the summer of 2019 (over five years) and $30 million less than if he signs a max with a new team (for four years).

Because more teams could be operating with max cap space next summer, Irving should have plenty of suitors outside of Boston if he remains healthy. Irving is willing to bet on that entering the offseason.

Like with rookie Terry Rozier (more on him later), finances and roster flexibility might prevent veteran forward Marcus Morris from getting an extension offer. Entering the last year of the below-market contract he signed in Phoenix, Morris is eligible for a four-year, $46 million extension that would begin in 2019-20. Boston will need to be cautious in exploring extension talks with Morris, even if he's interested. The Celtics could be adding four first-round picks in 2019 while Rozier and Irving are up for new, expensive deals.

A possible extension for Spencer Dinwiddie will need to wait until Dec. 8, when the guard reaches the second-year anniversary of his current contract.

The journeyman is eligible for a four-year, $46 million extension with a starting cap hit of $10.4 million. However, former lottery pick D'Angelo Russell is up for a new deal in 2019 and the Nets are projected to have significant cap room. Brooklyn should delay a new contract for Dinwiddie -- letting him hit unrestricted free agency -- if his annual price tag surpasses $7 million.

It is only natural to see the name of All-Star Kemba Walker floated around in trade rumors.

Despite being extension eligible, Walker will enter the season in the final year of the $48 million deal he signed in October 2014. An extension would net the guard only a four-year, $65 million contract, so Walker assuredly will play out the season on an expiring contract.

Keep an eye on Kevin Love. As ESPN's Dave McMenamin reported, Cleveland is interested in keeping Love even if LeBron James departs. Love enters 2018-19 technically on an expiring contract because of his $25.6 million player option for 2019-20.

The Cavaliers can take a similar approach to what the Spurs did with LaMarcus Aldridge last offseason when they extended the All-Star for an extra two seasons with the last year partially guaranteed.

Entertaining extension talks with Love makes sense if the plan is to retool rather than fully rebuild.

The fact that Klay Thompson (free agent in 2019) and Draymond Green (2020) will bypass extension talks this summer does not mean that the pair is eventually leaving in free agency.

Thompson is eligible for a four-year, $102 million extension, roughly $86 million less than what he can sign for in 12 months. While we don't know if the guard will give Golden State a hometown discount then, he's not sacrificing that kind of long-term money now.

Because Green is an extra year away from free agency, the forward can add only three years and $71 million to the $36 million left on his contract. As with Thompson, an extension for Green is a non-starter.

Both players will be super max eligible next year if they earn All-NBA, Defensive Player of the Year (DPOY) or MVP honors, but Golden State could sign only one of them to such a deal because Steph Curry is already on the designated veteran player extension (DVPE).

It shouldn't be an insult when Milwaukee likely extends a four-year, $70 million extension to Khris Middleton this summer. After all, that's better than the contract he signed in 2015.

However, Middleton could earn a lot more in free agency next summer. He's a borderline All-Star in the prime of his career (turning 27 in August) and there will be a demand for his shooting and defense. An extension for Middleton would start at $15.6 million, ranking him 16th in annual salary among current small forwards.

Like former second-round picks Josh Richardson and Norman Powell, Malcolm Brogdon is eligible to receive a four-year, $46 million extension starting July 29. And like both players, Brogdon has outperformed the three-year, $3.8 million contract he signed in 2016.

However, Milwaukee could wait until the summer of 2019, when Brogdon becomes a restricted free agent and take advantage of his $1.9 million cap hold instead of having a double-digit cap hit. The risk is that Brogdon puts together another solid (injury-free) season and the discount from a current extension is gone if he signs a big offer sheet from a competitor.

As withLou Williams last February, the Clippers can take a proactive approach with forward Tobias Harris.

Even if the Clippers treat 2018-19 as a bridge season before chasing multiple max players next summer, extending Harris to a first-year salary of $16.8 million would accomplish two things: lock up a talented 25-year-old in the prime of his career at a team-friendly number and still leave the Clippers with close to $45 million in room.

Harris could be extended for up to four years, $75 million, and his first-year salary would rank 10th among power forwards.

Like Irving,Jimmy Butlerhas no incentive to sign a long-term extension in Minnesota this offseason ... unless his injury history makes $100 million guaranteed too overwhelming to turn down.

Butler is coming off an injury-marred season in which the guard played 59 games, the second fewest of his career. In fact, since Butler was drafted in 2011, the All-Star has logged only two seasons in which he played 70 games or more.

Butler is eligible to sign a four-year, $109 million extension starting on July 6 but will likely bypass any talks and become a free agent in 2019. A new contract then could be worth five years, $188 million in Minnesota or four years, $139 million with a new team.

If Kawhi Leonard is still in San Antonio, July 16 is an important date for him and the Spurs. It's the first day Leonard could sign a $219 million super max contract -- if the Spurs even offer it.

If the offer is not on the table and the Spurs elect to hold on to the forward during the season, Leonard will have to earn All-NBA, MVP or DPOY honors in 2018-19 to be eligible again when he is a free agent next summer.

Keep in mind that Leonard is not super max eligible if he is traded, and teams acquiring him can only extend his contract six months after a deal at a starting salary of $24.1 million, a projected $8 million below where his max salary as a free agent would start. Losing that DPVE option would cost Leonard up to $30 million on his next deal if he's traded to a new team and re-signs in free agency (for five years) or $70 million guaranteed if he signs with a new team in free agency in 2019 (for up to four years).

Waiting until the 2019 offseason

Anthony Davis is technically extension eligible but he has not met the years of service criteria (seven or eight years) for a super max even after earning All-NBA honors in consecutive seasons. Davis is eligible for a three-year, $98 million extension that would start in 2020-21, but he will wait until next July, when he can sign the largest contract in NBA history -- five years, $228 million.

Earning All-NBA honors this season will leave Damian Lillard waiting another year to become super max eligible. Lillard will need to be selected All-NBA again to be eligible for a $185 million extension in 2019, as opposed to two extra seasons now for a total of $80 million.

Despite the change in the 2017 collective bargaining agreement that saw rookie free-agent cap holds increase across the board, teams most likely will still play the waiting game when it comes to rookie extensions this summer. The 2015 draft class is still operating under the 2011 CBA, so the free-agent hold for a player likeDevin Bookernext offseason will be only $9.9 million. Had Booker been a first-round pick in 2017, his cap hold would be $15.9 million, costing the Suns a significant amount of cap room.

For the Suns (Booker), Knicks (Kristaps Porzingis), Nets (Rondae Hollis-Jefferson) and Pacers (Myles Turner), the smart approach will be to wait until their young players hit restricted free agency in the summer of 2019. All four of them project to have significant cap space then.

An exception here: D'Angelo Russell has a $20.1 million hold that is significantly higher than what he would receive in restricted free agency. Brooklyn would be best off taking a wait-and-see approach with him. A career year statistically should not overshadow that the former lottery pick has been inconsistent in his first three seasons, including missing 34 games to injury last season.

All-Star Karl-Anthony Towns will not have to play the waiting game. The former No. 1 pick is eligible for a five-year, $157 million max contract with a first-year cap hit of $27 million. Because the Timberwolves will be over the salary cap in 2019-20, there is no incentive to wait on a new contract.

And if a new contract is in place, expect the Wolves and Towns' agent (Leon Rose) to negotiate a percentage increase if the big man lands All-NBA or DPOY honors during the 2018-19 season. For example, Towns could earn 30 percent of the salary cap in 2019-20 if he is voted All-NBA first team. Reaching the criteria would net Towns an additional $31 million and see his cap hit in the first year of the new deal increase from $27 million to $32.4 million.

Breakout Celtics guard Terry Rozier is rookie-extension eligible until Oct. 16, but Boston could take a conservative approach before paying two point guards a combined $40 million (at least). With Jaylen Brown extension eligible next summer and Jayson Tatum up the following year, Boston will project to be a luxury-tax team even if restricted free agent Marcus Smart walks.

Keep in mind that GM Danny Ainge has been conservative when it comes to rookie extensions and has signed only two players -- Kendrick Perkins and Rajon Rondo (2009) -- to new deals early.