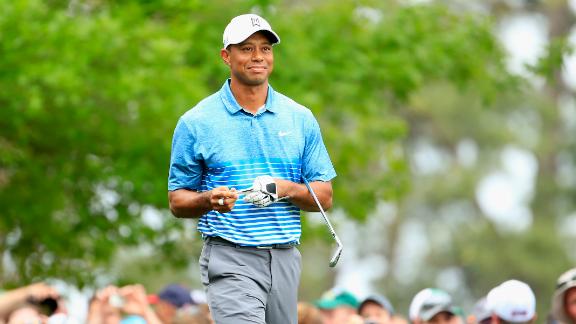 AUGUSTA, Ga. -- At least one Masters streak will end for Tiger Woods this week.


For the first time since 2004, Woods will compete in Wednesday's Par 3 Contest -- and he'll have his children, Sam and Charlie, there with him as caddies.


Woods confirmed the decision at his news conference Tuesday, calling the chance to be with his family "special."


"As I said, this tournament means so much to me in so many different ways," Woods said at his news conference Tuesday. "We all know what happened in '97 with my dad's health, and he was pronounced, well, he was dead at one point earlier that year; came back, and then came here and I won the Masters. To now have come full circle and to have a chance to have my kids out there and be able to share that with them, it's special.


"Charlie has seen me win a golf tournament before. Sam, actually she was there at the U.S. Open in 2008, but doesn't remember it. It's nice to be able to share these things with my family, and it just means the world to me. They are excited, I'm excited and can't wait to go out there."


The traditional nine-hole event serves as the calm before the storm of the year's first major championship. Competitors employ family members or friends as caddies, while smiles and laughs rule the laid-back afternoon.


In his last appearance in the Par 3, Woods competed alongside Arnold Palmer and Mark O'Meara. His hole-in-one on the final hole eventually gave him a share of the day's best score, but he elected to forgo a playoff. That might have been a strategic maneuver, considering no player ever has won the Par 3 and the Masters in the same year.


O'Meara said they also will play the Par 3 together.


"He had mentioned it to me in January. He called me after I finished second in Hawaii, lost by a stroke to [Miguel Angel] Jimenez in Hawaii," O'Meara said. "He called me, we had a 45-minute conversation, which we hadn't had in a long time. He mentioned the Par 3 Contest and said, 'Hey, I'm going to bring my kids up. Do you want to play?' I said, 'Tiger, I'm all for this. If you want to play, I want to play. If you don't want to play, I understand.' I said, 'I've had my kids caddie for me; I've had my stepson caddie for me; I had my wife caddie for me last year when I had a hole-in-one. So I get it.' And he said, 'Let's do this.'


"But then he moved away from the game for a while, so I didn't know if he was going to play here or not. But he signed us up in the Par 3 and I said, 'Let's go out and have some fun.' I think it'll be neat. Yeah, he's getting more focused today, because the tournament is getting near, but I just think he's in a better place. On a scale of 0-10 on his game, I'm a very hard grader, but I'd give him an 8."


A four-time Masters champion, Woods hasn't won the tournament since 2005. He enters this week as the world's 111th-ranked player after stepping away from the tour in early February to work on his game.


Information from ESPN's Ian O'Connor was used in this report.