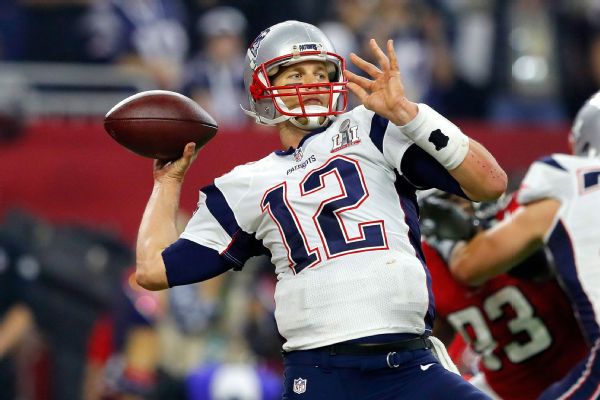 HOUSTON -- If anyone sees Tom Brady's game jersey from Super Bowl LI, the New England Patriots quarterback has a message for you: Could it please be returned?

Brady couldn't find his jersey in the Patriots' celebratory locker room after a 34-28 overtime victory over the Atlanta Falconsat Houston's NRG Stadium.

"It will be on eBay soon, I guess," he told ESPN's Kevin Van Valkenburg on Sunday night, while on his way to the team buses.

After the game, reporters saw Brady looking through the bag in front of his locker and then calling some team staffers over.

"I put it in the bag, and I came out and it wasn't there anymore. It's unfortunate because that's a nice piece of memorabilia," Brady said Monday. "If it shows up on eBay somewhere, someone let me know so I can track that down."

Asked if he planned to give the jersey to his mother, Galynn, who has been battling an undisclosed illness, Brady said Monday: "Those are special ones to keep.

"What can you do? I'll take a ring, and that's good enough for me."

In a video posted Sunday on the NFL's Twitter account, Brady told Patriots owner Robert Kraft that "someone stole my game jersey."

"Are you serious? Well, you better look online," Kraft replied.

"It was right here. I know exactly where I put it," Brady said, according to USA Today Sports.

Something similar happened to Brady's jersey after the Patriots' 28-24 victory over the Seattle Seahawks in Super Bowl XLIX on Feb. 1, 2015, so this isn't a one-time occurrence. It didn't seem to be a major concern to the team.