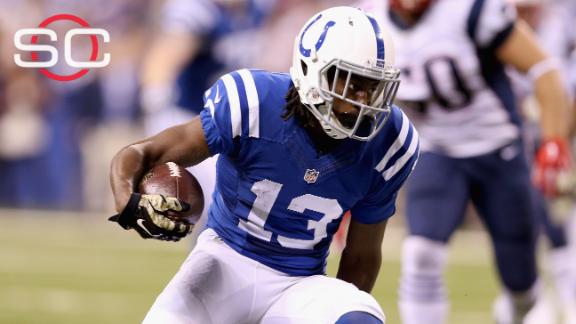 ANDERSON, Ind. -- The Indianapolis Coltsagreed to a contract extension with fourth-year receiver T.Y. Hilton on Thursday.

The deal is for five years and is worth $65 million -- $39 million of which is guaranteed, agent Drew Rosenhaus confirmed.

Hilton's $39 million guaranteed is nearly twice as much guaranteed money as any other player on the Colts roster. QuarterbackAndrew Luckissecond on the team in that category at $22.1 million, according to the Roster Management System.

"[The Colts] showed interest that they wanted me and I also wanted to be here," Hilton said Thursday. "There's no place I rather be than here. This organization is great. I love being here.

"I didn't want to go into the season with it on my mind. I'm ready to play. [Go] to practice and give it my all."

Hilton, who is part of a talented 2012 draft class by the Colts, is coming off his first Pro Bowl appearance after posting 82 receptions for 1,345 yards last season.

"It's a great day for the Indianapolis Colts, T.Y. Hilton and his family," Colts general manager Ryan Grigson said in a statement. "We're extremely happy as an organization to ensure that T.Y. will continue to be a part of our journey for many years to come. His daily excellence on and off the field is a shining example of an individual striving for greatness and what it truly means to be a Colt."

Rosenhaus, was at Anderson University on Wednesday meeting with the Colts for the third time since training camp began Aug. 1. His brother, Jason Rosenhaus, also attended the meeting.

Colts owner Jim Irsay had told ESPN.com late last month that he believed the two sides could get a deal done before Labor Day.