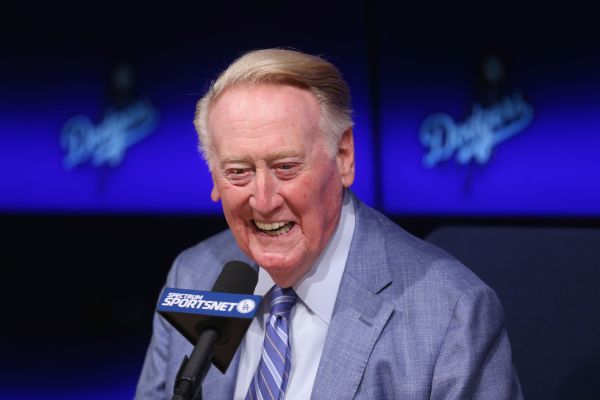 LOS ANGELES -- Vin Scully returned to Dodger Stadium on Wednesday, cracking jokes and telling stories as if he had never left.

Scully was back at the ballpark to become the 11th inductee into the Dodgers ring of honor prior to a game against the San Francisco Giants. Scully retired last year following his 67th season broadcasting the team's games.

In a pregame ceremony, Los Angeles manager Dave Roberts walked Scully toward left field, and the entire team followed. They watched as Tommy Lasorda and Sandy Koufax unveiled a microphone bearing Scully's name, the only non-number in the ring.

"It's very emotional, even though I don't show it," Scully said. "I'm pretty good at looking stoic. I don't see those numbers. When I look at what you would call numbers, I see faces. I hear voices. I see those numbers' movement. I look at 39, and I don't see 39. I see Roy Campanella. I see outside the kitchen in Vero Beach (the Dodgers former spring training facility).

"I used to literally sit at his feet with a lot of other young ballplayers, and Campy would tell stories. I can do that with every number up there."

Scully spoke briefly, opening his remarks the same way he used to begin broadcasts: "Hi everybody, and a very pleasant and good evening to you." He said it was the last time he'd use the phrase.

"Now they're welcoming me home," Scully told the crowd. "Just between you and me, and don't tell management, but I don't deserve to be up there with them. Anyway, I'm there and eternally grateful to the Dodgers for putting me there. Now, if you want to join me again, it's time for Dodgers baseball."

He pumped his arm, then walked back with Roberts and the Dodgers as his escort. Reliever Kenley Jansen put his arm around Scully and walked him into the clubhouse.

The 89-year-old Scully said he hasn't been watching Dodgers games. Instead, he said he sits outside his Hidden Hills home with his wife Sandi and a cold beverage. He follows the Dodgers by reading the newspaper the next day.

Retirement seems to agree with Scully, who wore his usual suit for the occasion.

"I think it's easier than I thought because I'm totally and completely at peace," Scully said. "It's a remarkable feeling. It's not like, Gosh, I feel good. I could've done another year.' No, none of that. I'm completely at peace mentally, physically as best as I can be. I'm in the right spot of my life at the right time."
Related topics:
sportsespnmlbsan francisco giantslos angeles dodgerskenley jansen
Copyright © 2020 ESPN Internet Ventures. All rights reserved.
More Videos
From CNN Newsource affiliates
TOP STORIES
PG&E Power Shutoffs: Outages to begin Sunday afternoon in Bay Area