Why the A's will never be the Astros 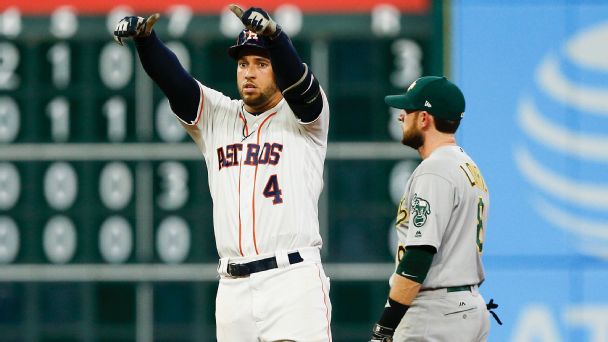 The week's biggest mismatch put the A's against the Astros in Houston. The visitors had the American League's worst run differential, while the home club had the league's best. The entire A's roster has three career All-Star appearances; the Astros are poised to have three starters in this year's game alone. The A's have already begun shedding salary, while the Astros will be in the mix for this trade deadline's biggest names -- including A's ace Sonny Gray.

To this imbalance, perhaps we must add one more advantage: The Astros' path to this remarkable season is, according to A's architect Billy Beane, off limits in Oakland.

Every team is born with its own disadvantages, large or small. The Colorado Rockies play at an altitude that seems to wreck, either physically or psychologically, young pitchers. The Baltimore Orioles play in a division that, for a decade and a half, couldn't be won with fewer than 95 victories. The San Francisco Giants have to pay players more to offset higher state income taxes. The Toronto Blue Jays have to convince players to move to a different country. The Seattle Mariners have to travel farthest. The Chicago White Sox have to share a market with a more popular team, while the Tampa Bay Rays don't even get a market. And so on. Every team has a bummer.

One of the bummers for the A's might be that "we can't be like the Cubs and Astros," as Beane said before the 2016 season. The Astros, of course, famously and intentionally got very, very bad before getting very, very good. They had the worst three-year run, and the worst four-year run, since the expansion Mets, and boasted all along that this was by design. The Cubs took a similar, slightly more elevated road to their World Series title, fielding an unnecessarily bad roster for three years while collecting future stars and future flexibility. The Braves also did the Full Rebuild -- which we can define as a commitment to being very bad for two or more years and making every decision based entirely on future value rather than present -- and are coming out of it with the best farm system in baseball; the Padres are still in the depths of the Full Rebuild. It's a good plan; crass but inevitable. The freedom to win three years from now while 27 other teams are dying to win today is an almost foolproof advantage.

While the A's keep a low payroll and are quick to trade their stars for young talent, they rarely punt on a season before it starts or build a team to win 60 games. The result is an in-between roster, capable of 70ish wins but not 90, containing some young talent but nothing like an elite core. In this new era when tanking to win is praised as savvy and obvious and even socially acceptable, there's apparently a gap between the teams that get to do it and the teams that don't.

So who can't? If we believe various executives' quotes over the years, not just the A's.

The New York Yankees can't. Team president Randy Levine: "What has to be noticed here, unlike very few teams, what we've done, is we can't rebuild here. Most teams, they have two, three, four years to rebuild. We don't do that."

The Milwaukee Brewers can't. Former GM Doug Melvin: "We try to avoid the total rebuild. That's just our philosophical decision because we can't afford to be so bad."

The Cincinnati Reds can't. Recently retired GM Walt Jocketty: "They were losing for a long time and a lot of markets can't do that. We can't do that in our market."

The Philadelphia Phillies can't.Former GM Ed Wade: "It was that old adage, 'You can't rebuild in a place like Philadelphia.' True or not, we never got to a point where we were abandoning a season to try to make it work at the development level. It was truly a parallel-path kind of thing. Let's not lose sight of the fact we have to win at the big-league level. We've got a fan base that demands it."

The New York Mets can't. Former GM Omar Minaya: "It's not a market where you can go young. You have to bring in players."

The Giants can't. Then-GM Brian Sabean: "We can't go through a tear-down-and-rebuild program. ... If we don't win we won't draw."

The White Sox can't. Owner Jerry Reinsdorf: "My original plan was to unload all the high-salaried guys and trade for young players, rebuild the ball club. To get the payroll down. If we drew a million fans, my accountant had it figured out we'd make a $5 million profit. It would have been the smart thing to do. Then I got nervous. What if I destroyed the franchise?"

The Boston Red Sox can't. Former GM Ben Cherington: "We're in a unique baseball market. We have an obligation to give the fans our best shot every year. That's the way the business model is set up, and the baseball model is a reflection of that."

And the A's can't, as laid out by Beane. "Our market won't allow us to punt for five years," he said. The A's are the second team in a two-team market, with an inferior fan experience and a rickety base of season-ticket holders. Even hoarding good young stars, he says, isn't viable in Oakland because he can't hold on to those players as long as the Cubs and Astros can. "Just collecting young players is not something in our market place we can do," he said in 2014.

That's nine teams out of 30, and those are just the ones whose GMs let themselves be quoted. Taken together, we've got virtually every kind of team and every kind of market represented in the can't-tank category:

By the GMs' implications, we've ruled out 23 of the 30 teams, and it wouldn't surprise me if the Blue Jays and Rangers can't (because baseball is a secondary sport in their cities), and the Rockies and Diamondbacks can't (because they don't have many decades of history in their cities). Which leaves the Twins, the Marlins and the Astros as exceptions. Arguably.

Of course, many of the teams we've ruled out as total-tear-down candidates have done total tear downs. Some of them are doing so right now! Either we've overfit these reasons for not tearing down, or "you can't rebuild in ______" is just a myth GMs hold on to until they realize it's the obvious, if uncomfortable, way forward.

The Phillies clearly believe the latter. They cut payroll from $177 million in 2014 to $88 million last year, and the scattered signings they made last offseason were designed not to make the 2017 playoffs but to set up trades -- for young talent -- this summer.

''The teams that have gone through successful rebuilds have gone through periods much like we're going through right now,'' GM Matt Klentak told the New York Times this month. "The Chicago Cubs were among the worst teams for a handful of years. In all of those stretches, there were stretches very similar to what we've gone through in the last six weeks. ... This is one of the challenges of rebuilding. We owe it to our franchise, to our fans, to our ownership to make sure that we don't deviate from what we know is the right thing for the future of the club."

Maybe the A's are right about their market. And even if they're wrong, I'm not sad as a baseball fan to see them eschew the Full Rebuild. It's no fun to watch a proud franchise intentionally gut itself for years on end, gaming the system while offering fans no short-term hope. But one need only look on the field in Houston this week to see which way the sport is going. I'm glad the A's don't think they can be like the Cubs and Astros, but I'm not an A's fan.
Report a correction or typo
Related topics:
sportsespnbilly beanemarkettankingoakland athleticsmlbhouston astrostank
Copyright © 2022 ESPN Internet Ventures. All rights reserved.
TOP STORIES
Fights break out after person sprays mace at SF Pride crowd
Watch ABC7's coverage of SF Pride Parade and Celebration
PHOTOS: San Francisco Pride Parade and Celebration 2022
US basketball star Brittney Griner due in Russian court
Evacuation lifted after fire burns close to homes in Albany
SF Pride Parade returns big after pandemic pause
3 dead, 2 injured after car, Amtrak train collide in Brentwood
Show More
Biden signs landmark gun measure, says 'lives will be saved'
SF's Dyke March makes celebratory yet somber return
Allies in Action: Embracing LGBTQ+ Families
SF police urge Pride attendees to remain vigilant
Trans March returns to SF after 2-year hiatus
More TOP STORIES News