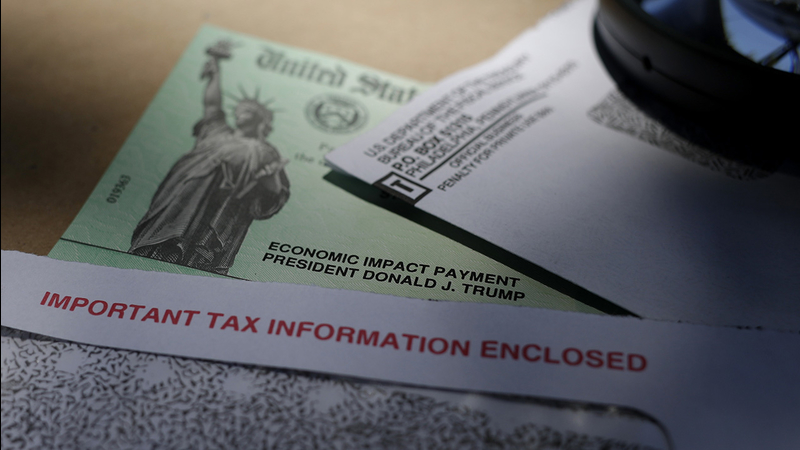 EXCLUSIVE: Homeless forced to wait for stimulus checks; here's why

SAN JOSE, Calif. (KGO) -- Thousands of unhoused people hoping a stimulus check would give them a boost this new year may have to wait a little longer.

A new company set up to help the homeless apply for pandemic relief advertised that checks would be distributed this past Sunday. For the second month in a row, it didn't happen. It's a story you'll only see on ABC7.

RELATED: What to do if IRS 'Get My Payment' portal shows error, address changed in 2020

A small crowd began gathering before 9 a.m. Sunday by a railroad track next to a homeless shelter in San Jose.

Many of these same people showed up last month after being told the checks would be distributed then.

"Nobody was here. So I called the number and they called me that evening and they assured me they would be here today," said Robert Perez, who is homeless in San Jose.

Docuprep told 7 On Your Side last month it canceled the December event after a mailbox company refused to release the checks, suspecting fraud.

It also says US Bank declined to allow them to deposit the checks for the same reason.

Docuprep had planned to convert the $1,200 checks to debit cards, distributing $800 to each applicant and keeping $400 for itself.

A group of homeless people in the South Bay say a company that promised to deliver stimulus checks to them failed to distribute them as promised.

Wei E. is a volunteer with a Mountain View nonprofit which assists the homeless, Hope's Corner. She says the fee was a bit high, but overall the intent is good.

"Those unhoused people may not have signed up for anything, at least now they have a chance," said Wei.

Jared Jones of Docuprep held a list of what he said was 7,200 applicants who applied for stimulus checks with the help of the company.

He said the IRS rejected 60 percent of the applicants, including Raphael Arellano.

RELATED: Debt collectors can contact you by email, text and social media starting next year

"It says it was actually rejected and it says the Social Security number didn't match. Now most of the time we see that it's a typo," Jones said to Arellano.

Arellano is told to call the IRS to correct his Social Security number.

Jones told Wei he had no checks to distribute, even to those who were approved. He says the IRS refused to release the checks to Docuprep.

"Because of all the EDD fraud. They want to make sure it's legit," Jones explained.

He told Josephine Gali to call the IRS to claim her check.

"I am very happy that I received the check. And get myself out of the street," she said.

The IRS, which last month confirmed it was investigating Docuprep, declined to comment for this story.

The company says it will now waive all fees and people will be able to get their entire stimulus payment.

Have a question for Michael and the 7 On Your Side team? Fill out the form HERE! 7OYS's consumer hotline is a free consumer mediation service for those in the San Francisco Bay Area. We assist individuals with consumer-related issues; we cannot assist on cases between businesses, or cases involving family law, criminal matters, landlord/tenant disputes, labor issues, or medical issues. Please review our FAQ here. As a part of our process in assisting you, it is necessary that we contact the company / agency you are writing about. If you do not wish us to contact them, please let us know right away, as it will affect our ability to work on your case.
Report a correction or typo
Related topics:
societysan josemountain viewhomelesscoronavirusstimulus fundscoronavirus pandemicpandemic7 on your sidecovid 19 pandemiccovid 19
Copyright © 2022 KGO-TV. All Rights Reserved.
7 ON YOUR SIDE
Woman's tax refund, wages seized to pay back money EDD sent to crook
United cancels couple's flight, charges $4,000 more for same seats
Renter scams using Zelle to receive money from victims
Airfares are sky-high - will they come back down?
TOP STORIES
Gun, ammo found in 2nd grader's desk at NorCal school
Timeline breaks down Uvalde shooter's movements day of massacre
ABC7's new 24/7 live stream offers local news, weather
Uvalde school shooting: What we know about 19 kids, teacher killed
Beto O'Rourke confronts Texas gov. at Uvalde shooting press conference
TX school shooting leaves at least 19 children, 2 adults dead
Presidio unsafe for visitors due to staffing crisis, labor union says
Show More
Former Capital Cities/ABC Chairman and CEO Tom Murphy dies at 96
Woman's tax refund, wages seized to pay back money EDD sent to crook
Mass shootings in the U.S. have nearly tripled since 2013
SJSU athletes tackle mental health stigma
Kelly Ripa, Ryan Seacrest react to Texas school shooting
More TOP STORIES News