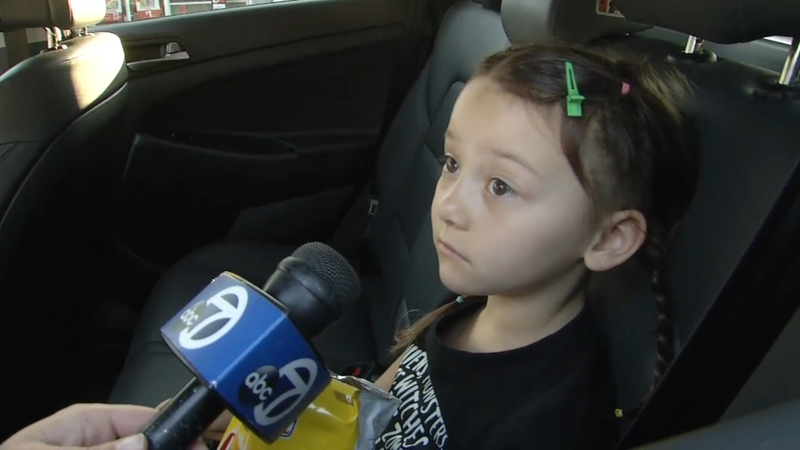 SAN JOSE, Calif. (KGO) -- Alert neighbors and a quick response from San Jose Police helped reunite a 5-year-old who was abducted when her father's SUV was stolen Saturday night. In a story you'll see Only on 7 reporter Katie Utehs talked with the young girl about the frightening ordeal.

"I'm already in kindergarten because I already celebrated," said Sadie-Rae Machado while explaining that she's 5 years old. She now has a story to tell her classmates.

Around 4 p.m. on Saturday Sadie-Rae slept in the back seat of her dad's SUV as he parked at the Quik Stop near Story Road and Leeward Drive in San Jose, Calif.

"I parked right in front of the store. I grabbed a drink, I went, I double checked to see if everything was cool and the guy gave me my change back and I looked back and my car was gone just like that," said Michael Machado as he snapped his fingers to demonstrate how quick the theft and abduction happened.

While in the Quik Stop, Machado left his SUV running, so it took the thief no time to get behind the wheel and take off.

"The guy breaks down. He just start crying because he's telling everyone here that he has a 5-year-old in the car," said James Simon, a Quik Stop clerk.

Sadie-Rae woke up to a stranger driving her dad's car.

Then about six blocks south he kicked her out.

"My mom was at the kitchen window and she saw a little girl right over here behind us crying so she came out to see what was going on," said resident Lino Garcia. He then called 911.

"Maybe 20 minutes, maybe, I don't know because I was so panicked I didn't really know how long it was. It just felt like forever," said Machado of how long it took to see his little girl again.

After dropping off the little girl, the thief ditched the stolen SUV nearby.

"Yeah, this is where he broke through," said Victor Cadena, as he showed the area of a wooden fence where the thief broke into his backyard.

"He was all frantic and he was telling me to be quiet, to not say nothing," Cadena explained.