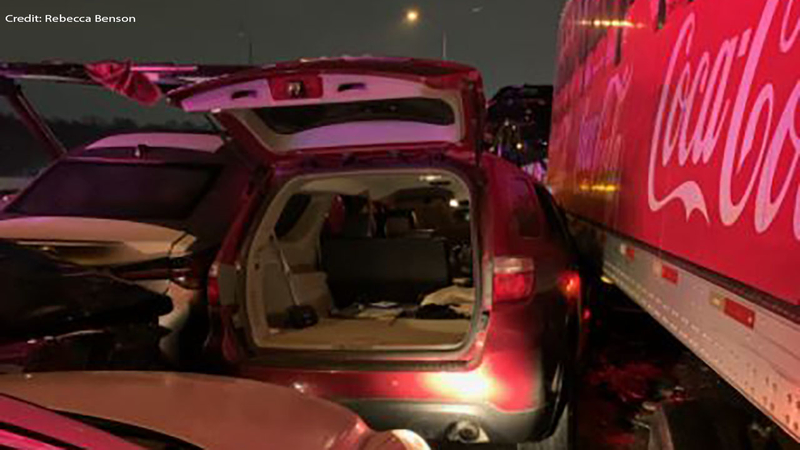 Texas nurse reports for work after crawling out of deadly pileup

FORT WORTH, Texas -- A north Texas nurse said she is "unbelievably blessed" after she crawled out of a massive car pileup in Fort Worth and managed to report for work.

The incident happened around 6:30 a.m. Thursday on Interstate 35W just north of downtown Fort Worth. Fire officials said at least six people were killed in the massive crash involving at least 100 vehicles.

Thirty-six more people were transported to local hospitals from the scene of a pileup that happened as a winter storm dropped freezing rain, sleet, and snow on parts of the U.S.

Rebecca Benson says she was heading to work, like a normal day. She heard about bad weather coming, but when she left her home, the roads were dry - until she came up to a corner and things changed when she got on the bridge.

"As soon as I hit that bridge, [there was] black ice. My car started to spin out a little bit, but nothing crazy, and so I was adjusted," Benson said. "While I was coming around the corner, I see the cars in front of me. I'm trying to not spin out and to figure out if I can stop. I mean, my foot was as close to going through the floorboard as it possibly could be. And I realized that there's no stopping. So, there was a Coca-Cola semi and a car hauler semi that had kind of made almost like a triangle. So, I pointed the car there and prayed to God that I would be okay and that's when I hit them."

After the hit, Benson said she tried to relax but was shaking in her vehicle every time cars and semis slammed onto the pile.

"I looked in my rearview mirror and can see all of these cars heading towards me. So I think that was the scariest part, knowing that I survived this part but now the chances of me getting completely smashed by all the cars and semis behind me," Benson said in an interview with ABC's World News Tonight.

She described the scene as bizarre. "Like a zombie movie," Benson said.

While in her pinned car, Benson said somebody climbed over her car to get to people. That's when she was able to make her way out.

"I could hear something on my roof and saw little legs coming down my windshield. Somebody ended up opening the back of my car and asking if I was okay. And then I was able to actually get out because all my doors were completely blocked," she said.

Once she was freed, she says she called one of her co-workers who happened to be nearby and got a ride to work.

"So I talked to one of the police officers, I was like, 'Can I leave my car here and go hitch a ride with my co-worker?' So, I hopped the barrier, literally walked up the highway down to him," Benson said.

Benson adds she was with her co-worker stuck on the highway for about two hours before getting to the hospital and working a half shift. It wasn't until her husband mentioned taking her to a hospital that she finally went to get checked out.

"My husband was like, 'We need to get to the hospital.' So I worked until things kind of cleared up, and then got a ride and came to the hospital to get checked out," Benson said. "I have neck pain, shoulder pain, and my left elbow is bruised to the high-heavens and, you know, typical aches and pains that you would have. But I am unbelievably blessed."