KGO
By Luz Pena
SAN FRANCISCO (KGO) -- It's been one thing after another for Muni. From operators turning down overtime causing a manpower shortage. To equipment failures Friday. Muni riders say they're glad the week is over.

"I got on it and it didn't move for a while. I looked for a bike or scooter and there were none," said Muni rider, Elliot Pearce.

SFMTA says they learned about the failure around 6:33 am after "1,000 feet of wire and supporting hardware was torn down by a train traveling outbound from Powell to Civic Center station."

There are major problems for thousands of Muni riders in San Francisco.

Muni's deputy spokesperson, Erica Kato said it was necessary to shut down the inbound line for more than 11 hours.

"Downed overhead lines in the subway between Powell and Civic center stations. Immediately we stop subway service and ran bus shuttles so people coming from the surface got off at Castro station and went upstairs for a shuttle to do downtown," said Kato.

Hundreds of Muni riders were directed to take shuttles. Cameron Newcomb was on his way to work when he realized his train was not moving.

"I got on the train about 9:30 and got to church by like 10 am and everyone had to get off. There were 500 people waiting for the shuttle so it was pretty rough."

We tracked the Mayor of San Francisco outside an event tonight for comment.

"Tough week for commuters with Muni and its unacceptable and something will have to change. This is not sustainable," Mayor Breed added, "We are not prepared to talk publicly about the things we are proposing so as soon as we are we will."

In a statement to ABC7 news, SMFTA explained that the problematic wire broke because it was worn out.

"The overhead infrastructure damage was more extensive than we would typically expect with this type of incident. As the front car powered forward, the rear car dragged down the wire behind it. The train was operating in automatic train control mode, and until notified by a customer, the Operator had no indication that this issue was unfolding. The few passengers onboard safely exited the train at the Civic Center platform."

In a blog post, SFMTA blamed quote "decades of underinvestment" in infrastructure for the issues with the wire. 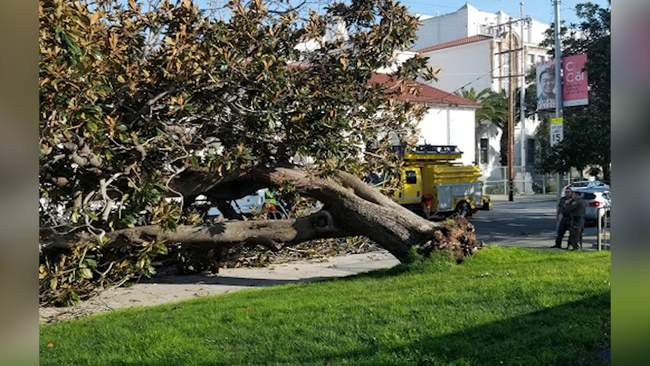