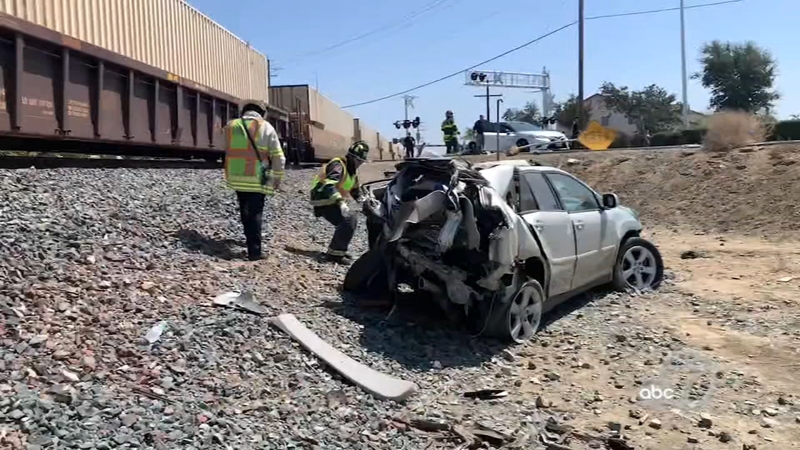 OAKLEY, Calif. (KGO) -- Community members in Oakley are expressing condolences after a crash involving a car and a train left a 12-year-old boy dead and a 19-year-old woman in the hospital with serious injuries.

"We never want to see anyone from our school die," said Jamier Peters, a classmate of the boy at Delta Vista Middle school. "It is just devastating. We are definitely going to do a chant for him at school. We lost a good kid today."

Authorities at Oakley Police say a car was hit by a train just before 1 p.m. near E. Cypress Road and Main Street Wednesday. They say the railroad signals at the train track crossing appeared to be working at the time of the incident.

They did not say what possibly lead up to cause the crash.

"I am traumatized, that is horrible," said Elizabeth Aimes who heard about the crash Wednesday evening. "We haven't had a train accident in years and the fact it took the life of a 12-year-old child, that is really really sad."

Oakley Union Elementary School District Superintendent Jeffery Palmquist said in a statement that he is "saddened to hear a Delta Vista Middle School student died as a result of a vehicle crash. We have readied our crisis management team and will have counselors available for counseling and bevearement services for students and staff."

Officials say three other cars were also involved and one car was overturned at the scene. Three other people involved did not require medical attention, officials told ABC7.

Train collision update:
Shortly before 1 p.m. a vehicle which had been travelling westbound on East Cypress collided with a train. One passenger has been pronounced dead at the scene & the driver was transported for treatment.

OPD asks you to AVOID the area.