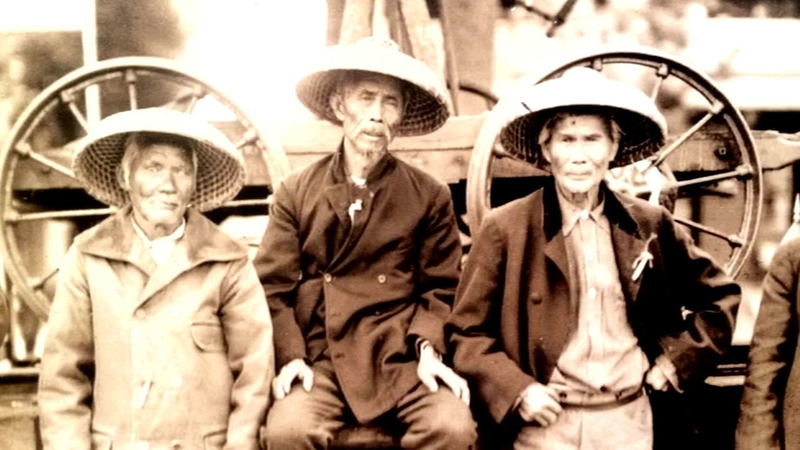 American railroad peers into Chinese past

STANFORD, Calif. (KGO) -- It is an American success story -- the linking of the east and west by railroad in the 1860s. However many of the people who built it weren't Americans but Chinese, and now there's an effort underway to better tell their story.

It has been more than 146 years since this group of rail workers gathered in front of two trains at Promontory Summit in Utah. The famous photo was taken to celebrate the linking of the Central Pacific and Union Pacific Railroads with the "Golden Spike."

What this picture doesn't show are the people who played a huge part in building the railroad. Two researchers at Stanford University are focusing in on them.

Gordon Chang and Shelley Fisher Fishkin are looking for answers about the Chinese who worked the railroad.

"We're trying to recover the history of the 10 to 12,000 Chinese who came to America to build the Central Pacific Railroad. Their labor was absolutely key to the railroad being completed," said Fishkin.

"We know very little about who they were, their names even, what they experienced, how they were recruited, how they lived and worked and died on the railroad and what happened to them subsequently," said Chang.

"Their story is hard to tell because they left no written records themselves. There is not a single letter or journal or even remittance envelope in the hand in one of these workers that has yet surfaced in the U.S. or China," added Fishkin.

Generations of racism and discrimination left the story of the Chinese laborers largely untold -- until now.

Sue Lee, with the Chinese Historical Society of America, said, "This is an attempt to educate people about the importance of the transcontinental, that it joined the country, that it provided a highway, if you will, between east and the west but it was also was a gateway to the orient."

The Chinese Railroad Workers in North America project is piecing together what really happened. So far, there isn't a lot go on, just family stories, old photos and drawings and documents from the railroad's builders.

Stanford University founder Leland Stanford was among them.

The researchers are working with the Chinese Historical Society of America. Video provide by the CHSA shows archaeologists sifting through the past for items that might tell them exactly where the Chinese came from and how they lived.

The society is also collecting oral histories for the project.

But they aren't just looking for Chinese descendants to tell the story of the "Iron Road." They are also looking for clues in the diaries or letters of others who worked on the railroad.

"We are trying to reach out to historians of Mormons, because many Mormons worked on the rail lines, Irish, and others, so we're hopeful that maybe one of those elusive diaries will turn up," added Chang.

The project hopes to know more about the Chinese workers by 2019. Just in time for the 150th anniversary of the completion of the transcontinental railroad.