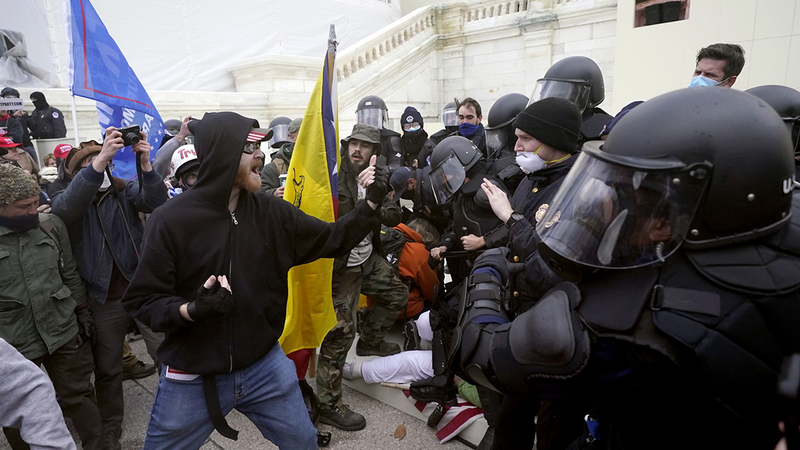 SAN FRANCISCO (KGO) -- As she watched the United States Capitol get besieged Wednesday by a crowd of Trump supporters, Bay Area activist Jean Bridges said she noticed a striking discrepancy.

"Any racial justice protest you go to there is a heavily militarized police presence and very clear boundaries where you are meant to be. It's just inconceivable," she said of the lack of police presence at the Capitol. "The experience is night and day."

What measures of security that were there, were breached as a hoard of Trump supporters broke past barriers, scaled walls and broke through windows to access the U.S. Capitol.

Several Bay Area politicians were on Capitol Hill when pro-Trump rioters stormed the building in an attempt to stop the certification of the election.

Bridges works with the advocacy group Wealth and Disparities in the Black Community and has been involved in organizing social justice protests in the Bay Area.

She said, she wasn't expecting the law enforcement reaction to be the same as at a Black Lives Matter protest, but did not think the crowd would be allowed inside.

"I was shocked that it went as far as it did," said Bridges.

Zahra Billoo, the Executive Director for the Council on American-Islamic Relations, had a similar thought.
"As a woman of color, I am very cautious of how I carry myself in those halls," said Billoo, about her experience traveling to the Capitol for work. "I've been there with colleagues where we are not able to carry food in our purses through the underground tunnels. And all these people breached the Capitol?"

Former FBI Agent, Rick Smith told ABC7 News, "there should have been better planning. It was allowed to get out of hand."

"I was so startled," he said, as he watched the video of the protest making its way into the building.

At least 52 people were arrested as of Wednesday night, according to the Associated Press.

California congresswoman Zoe Lofgren, the Democratic chairwoman of the House Administration Committee says the breach "raises grave security concerns" and has vowed to investigate how police handled the breach.