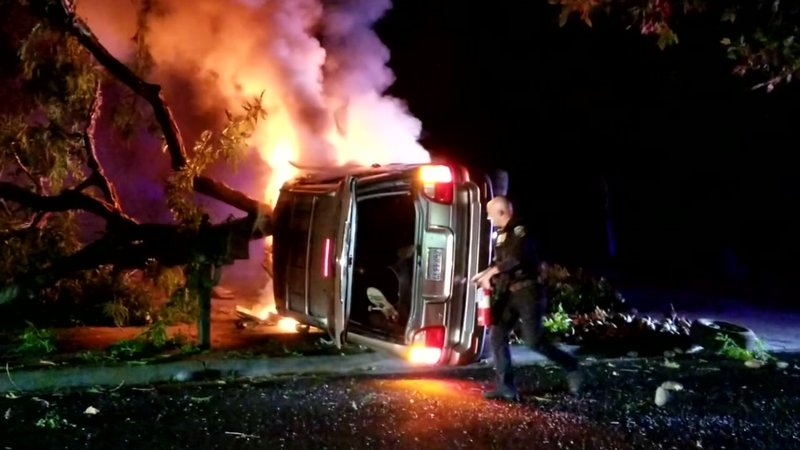 FREMONT, Calif. (KGO) -- A Fremont police officer recently pulled a man from a burning car. The incredible rescue was caught on camera.

Resident Beth Koenig captured the fiery scene along Curtner Road, just a block from her home.

Koenig initially heard a loud screech, then a bang, and rushed out of her home to investigate.

She came across a mangled SUV. Fremont PD said a 28-year-old driver took out a tree on Curtner Rd. Saturday night. The vehicle ended up on its side, on fire and impaled by a tree. The driver was stuck inside the car.

"He shouldn't have survived," Koenig said. "He did, and he walked away, and it's because of that officer."

Koenig started recording on her Samsung phone as Fremont Police Officer Jason Trzewieczynski arrived on scene. Video shows the officer first attempting to put out the fire with an extinguisher.

"When I realized that wasn't working, then all bets are off and you just have to drag him out any way you could," Trzewieczynski said.

Trzewieczynski entered through the back of the SUV. He's recorded clearing a path through the man's belongings, moving toward flames, and following the driver's pleas for help.

“He shouldn’t have survived. He did— and it’s because of that officer,” Beth Koenig said. She recorded the rescue. Her vid shows officer’s attempt to put out the fire with an extinguisher. Didn’t work, so he entered through the back & pulled man to safety. Story at 11p. #abc7now pic.twitter.com/rns1C9jhaR

Trzewieczynski said the tree was the biggest challenge, because it was difficult to see exactly where the driver was located.

But after maneuvering the man through the mangled car, Trzewieczynski was able to get the driver on his feet.

"Once I got a hold of his hand, I was able to drag him over the seat basically and all the way through three rows and out the back," the officer explained.

"He told that guy, 'Hey you need to stand up and help me get you away. If this thing blows, we have to get you away from the car,'" Koenig said.

Officer Trzewieczynski explained the immediacy, "About two weeks ago, I was on a car crash. Everybody was out, but the car was engulfed. And right when I showed up, the car exploded. So that was kinda going through my mind."

The three-minute-long video shows the flames taking over the car moments after the rescue.

On Monday, evidence of the wreck remained -- scorched plants, car parts, and other burn marks. The tree that was hit has been removed.

"I didn't have to punch or kick anything," he said, when asked whether his MMA experienced helped in the rescue. "But the grappling might have helped."

.@FremontPD Ofc. Trzewieczynski was captured on-cam, pulling a man from a burning SUV. INCREDIBLE video! The fiery crash happened Sat. night along Curtner Rd. “There’s nothing special about what I did. Any one of my partners would’ve done the exact same thing.” At 11p. #abc7now pic.twitter.com/ZPA647jzF0

Even with the remarkable footage, Trzewieczynski said rescuing the man from the burning car was business as usual.

"There's nothing special about what I did," he said. "Any one of my partners would've done the exact same thing."

Fremont PD said it's investigating the crash as a possible DUI. The driver was taken to the hospital after the crash.