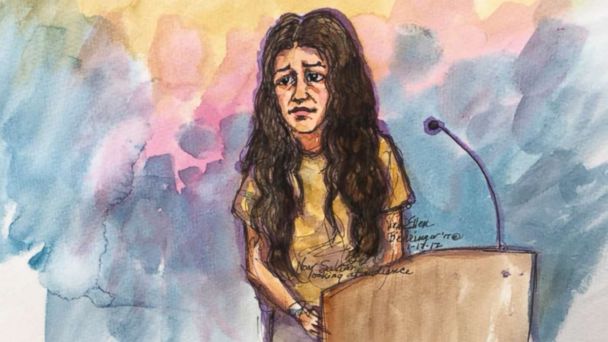 Prosecutors and defense attorneys painted radically different pictures of Noor Salman, the wife of Pulse nightclub shooter Omar Mateen, in the opening of her federal terrorism trial -- on the one hand helping her husband prepare for the attack and on the other, an abused woman who "married a monster."

"This trial is about what the defendant knew," Mandolfo said.

Mandolfo said Salman knew in the spring of 2016 that her husband was stockpiling weaponry and ammunition, casing potential targets, adding her name to his bank accounts and buying her tens of thousands of dollars in jewelry, purses and clothing.

"Together they spent $30,000 in the 11-day period leading up to the terrorist attacks," Mandolfo said, a figure that roughly represented Mateen's entire annual salary.

Mandolfo told jurors that in the tense, early hours of the investigation, Salman lied repeatedly to investigators about what she knew, only later admitting to an FBI agent that in the days preceding the attack, her husband asked her on one occasion, "How bad would it be if a club got attacked?" and on another occasion, "What would make people more upset: an attack at a club or an attack at Disney?"

Salman is being tried on charges of obstruction of justice and providing material support to a terrorist organization and could face up to life in prison if convicted on both counts. Mateen was killed in a shootout with police at the club.

Defense attorney Linda Moreno portrayed her client as a battered wife who was physically and verbally abused by Mateen for years, behavior echoed in a similar account Mateen's previous wife, Sitora Yusufiy, gave to the New York Times in 2016.

"Omar Mateen was a monster. Noor Salman was a mother, not a monster," Moreno told jurors. "Her only sin is that she married a monster."

Moreno urged jurors to see her client for who she really is -- a frightened, battered wife.

"We turn to the this stricken community of Orlando for justice," Loreno said. "You understand, especially, that to honor the dead and respect the living, you must get to the truth."

Salman's defense attorneys have said in court papers that they intend to call an expert in false confessions to testify about the unreliability of her confessions to police, and a domestic violence expert who will testify that Salman was so badly beaten that she was afraid to challenge her husband.
Report a correction or typo
Related topics:
abc newsnational
Copyright © 2020 ABC News Internet Ventures.
More Videos
From CNN Newsource affiliates
TOP STORIES