'My brother should step down': Family members call for Windsor mayor to resign 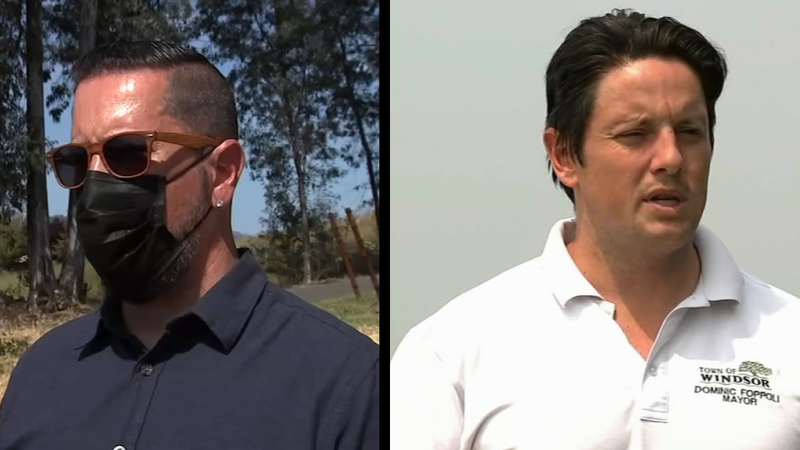 WINDSOR, Calif. (KGO) -- There are new developments in the case involving embattled Windsor Mayor, Dominic Foppoli - A sixth woman has now come forward to say she was sexually assaulted by him.

A protest was held Sunday outside the winery Foppoli owns. Even the mayor's brother is calling for his resignation.

A small group of protesters stood outside Christopher Creek Winery, co-owned by Windsor Mayor Dominic Foppoli. They were calling for his resignation.

"I wanted to draw attention to his businesses, the community is paying attention, we need him to be held accountable, he needs to resign," said protest organizer Hollie Clausen.

The mayor is under fire, after five women told the Chronicle that Foppoli sexually assaulted them. The alleged incidents took place over 16 years.

Sophia Williams says she was assaulted by Foppoli in 2006 after a night of drinking and dancing.

"I said 'no Dominic we're not doing this.' He rubbed his groin against me and eventually he put his hands down my pants," she said.

Now, a sixth woman has come forward with claims. Windsor Councilmember Esther Lemus told the Santa Rosa Press Democratic she believes she was drugged and sexually assaulted twice by Foppoli in 2020.

Foppoli told the newspaper he denies those claims and accuses Lemus of sexual misconduct, after she coerced him into an alleged "sexual situation," threatening his political career if he told anyone.

Lemus did not respond to our requests for comment.

On Saturday the mayor released this statement, saying in part:
"I believe anyone who believes they have been victimized should have the opportunity to be heard, and I didn't want to cloud my accusers' stories with an immediate response and therefore decided to give them time to be heard...but now is the appropriate time for me to address this matter: I am completely innocent of the conduct alleged and have not violated any of these women."

The Sonoma County Sheriff's Department has opened an investigation into the matter.

Most Sonoma County supervisors have called for Foppoli's resignation, along with eight North Bay mayors, who signed a letter calling him to resign.

"Dominic is no longer an employee of Christopher Creek," said Joe Foppoli.

Winery co-owner, Joe Foppoli, says his brother has been removed from the winery payroll, and must leave his government job too.

"I believe we should hold our elected officials to high standards and for that reason, my brother should step down as Mayor of Windsor," he said.

Mayor Foppoli has given no indication he will resign.

A special meeting of the Windsor Town Council has been called for Wednesday at 6PM to consider demanding Mayor Foppoli resign.