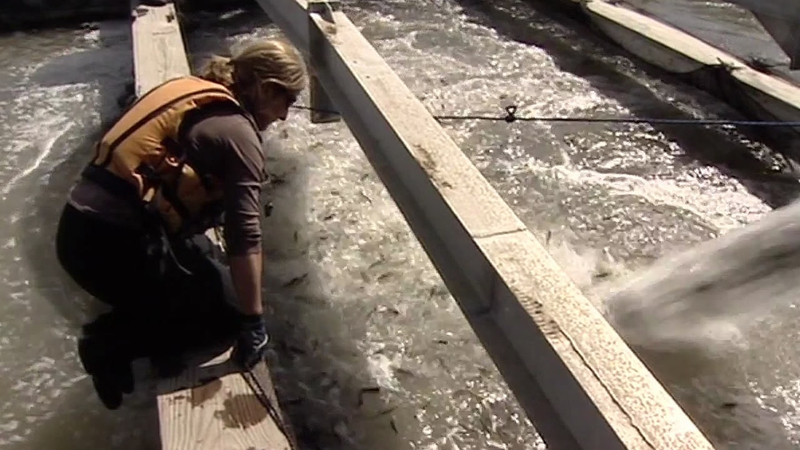 SAN FRANCISCO (KGO) -- The Bay Area's weekend rainstorms gave a window of opportunity for a species that is really struggling to survive. Now, more than half a million salmon are riding a big wave down the Sacramento River.

As the Bay Area clears toppled trees and downed power lines, there's something else going on a little farther inland. A hatchery is going to release 200,000 individual fish. It will be the first load of 600,000 individual 4" winter-run Chinook salmon that will be released in total.

Endangered since the 1990s, the winter-run Chinook salmon still spawn in rivers and streams, but they need help.

So these fish are being released from hatcheries to replenish the population.

California has two federal hatcheries, where biologists breed the salmon and raise them until they're old enough to swim downstream, hundreds of miles to the ocean. With these storms, they've decided to release nearly all of the fish that were ready because the rain makes for a golden opportunity, especially if it continues.

"A great big bubble of water coursing down the Sacramento Valley carrying a whole bunch of stirred up mud and sediment in the river water. That's as good as it gets. That mud and sediment acts as camouflage, protects those little fish from bigger fish that would love to eat them," McManus explained.

There's also another reason it needs to keep raining for those fish to make it out here to the Golden Gate Bridge. For all the natural predators that would eat young salmon for lunch, one of the biggest threats is actually man-made. Soon the water will be diverted from the Sacramento River into the inner delta.

Because so much of California relies on the water from this one river, the salmon are swimming amid a precious and limited resource. Pumping stations take some of this water down south to supply farms in the Central Valley.

"When they hit the delta, we're hoping that the pumping levels are not so high that they pull these fish in and kill them," McManus said.

A biologist at the Coleman Hatchery said it will take about a week for the fish to make it to the delta and they've asked the Bureau of Reclamation to close the gate to the pumps, so the fish can make it past. Of course, fish don't follow directions, so fishermen and conservationists can only hope they don't linger too long in the delta before making their way out to sea.
Related topics:
weathersan franciscosacramentoenvironmentgolden gate bridgesan francisco bayfishnatureraincalifornia watercaliforniadrought
Copyright © 2022 KGO-TV. All Rights Reserved.
TOP STORIES
EXCLUSIVE: Woman shoved to ground in Oakland's Chinatown speaks out
Health experts believe Bay Area has already reached omicron peak
Colorado Fire in Monterey Co. now 700 acres, 35% contained
North Bay anti-vaccine activists protest mandates
After the omicron wave, what's next for the COVID pandemic?
Families reflect on the 2 years since 1st COVID case in US
US draws down Ukraine embassy presence as war fears mount
Show More
How to use regular bills to boost your credit scores
VIDEO: Amazon driver comes face to face with bear during delivery
Kansas City Chiefs open as touchdown favorites, Los Angeles Rams 3....
Climate expert says CA may see more unusual winter wildfires
The SF Standard: 'The Curtis Family C-Notes'
More TOP STORIES News