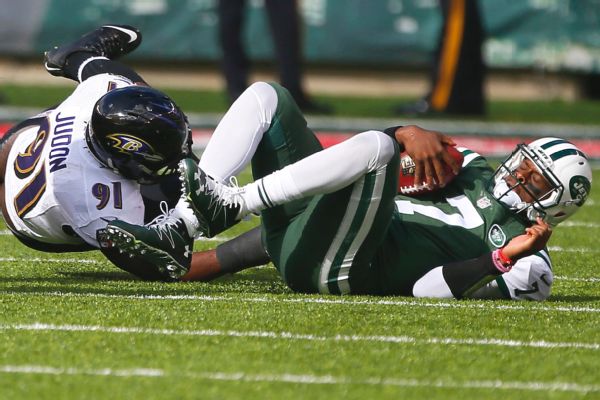 As a result, the Jets will change starters for the second time in six days. Ryan Fitzpatrick, benched last week in favor of Smith, will start Sunday against the Cleveland Browns, coach Todd Bowles announced.

Smith will visit Dr. James Andrews on Tuesday for a second opinion, but the Jets expect him to require season-ending surgery. His right knee twisted awkwardly Sunday on a second-quarter sack by Baltimore Ravens linebacker Matt Judon.

The 26-year-old Smith likely has played his final game with the Jets. He will be a free agent, and he doesn't factor into the team's long-term plans.

"When you hear [the news], it's tough luck for the kid and you go from there," Bowles said. "Fitz finished the game up, and we'll go on from there with Fitz."

At this point, Fitzpatrick is their only viable option.

Second-year quarterback Bryce Petty, who has no regular-season experience, returned to practice only two weeks ago from a preseason shoulder injury. He is not ready to start, according to Bowles, who feels the same way about rookie Christian Hackenberg.

Petty likely will be the No. 2 quarterback, but Bowles was noncommittal, saying he would make a decision based on practice. Bowles said he won't dress three quarterbacks.

Fitzpatrick replaced Smith and rallied the Jets to a 24-16 win over the Ravens, snapping a four-game losing streak, but his strong comments after the game overshadowed his performance.

Still bothered by last week's benching, Fitzpatrick said he believes the coach, general manager and owner stopped believing in him.

Bowles, commenting for the first time on Fitzpatrick's postgame venting, said he will discuss the matter with his quarterback. At the same time, the coach downplayed the headline-making remarks.

"If pissed off is going to stop the turnovers, then I'm more than happy to have him play pissed off the whole time," Bowles said.

"I know Fitz. I know what he means. I have no problem with him venting his frustrations. He can use it as a positive. If that's going to cause us to win more games and be pissed off, so be it."

Fitzpatrick was benched after a 1-5 start, during which he threw a league-high 11 interceptions. Smith, starting for the first time since Dec. 28, 2014, completed 4 of 8 passes for 95 yards and a touchdown before the injury.

After the game, Smith didn't seem alarmed, saying he didn't think the injury was significant.

The Jets' plan was to give Smith a long leash, at least four starts, before re-evaluating the position and their season at the bye week.

This was the second major injury in 14 months for Smith, whose 2015 season was ruined when he was punched in the face by a teammate during a locker room altercation in training camp. His jaw was broken, and he missed two months. By the time he was healthy, he had lost the starting job to Fitzpatrick, who parlayed a career year into a one-year, $12 million contract.

"He caught a bad break two years in a row," Bowles said of Smith. "Obviously, I'm sure he'll bounce back from it, but it's the tough part of the business."

In other injury news, centerNick Mangold underwent an MRI that revealed a sprained ankle. He will be evaluated throughout the week.