Marchers accused of wearing blackface during 2020 Mummers Parade in Philadelphia

WPVI
PHILADELPHIA -- The strutting of the mummers down Broad Street on New Year's Day is a famed Philadelphia tradition.

While the latest version was festive and fun, it was - once again - not without controversy.

At least two members of Froggy Carr, in the Wench Brigade, have been accused of wearing blackface.

Some are saying the act was clearly racist, while others say it was not blackface and there were no ill intentions.

Froggy Carr was disqualified from the competition, and Mayor Jim Kenney says there could be further repercussions.

During a news conference on Thursday afternoon, Stephen Pakech, Froggy Carr's president, said they do not condone the act.

Gritty was the theme of Froggy Carr's performance on Broad Street. An inflatable Gritty balloon hangs outside their clubhouse in South Philadelphia.

During the parade, marchers wore black and orange costumes and held umbrellas resembling the Flyers mascot.

People had on different variations of face paint - orange and black, orange and white, etc. - but at least two marchers wore only black paint. 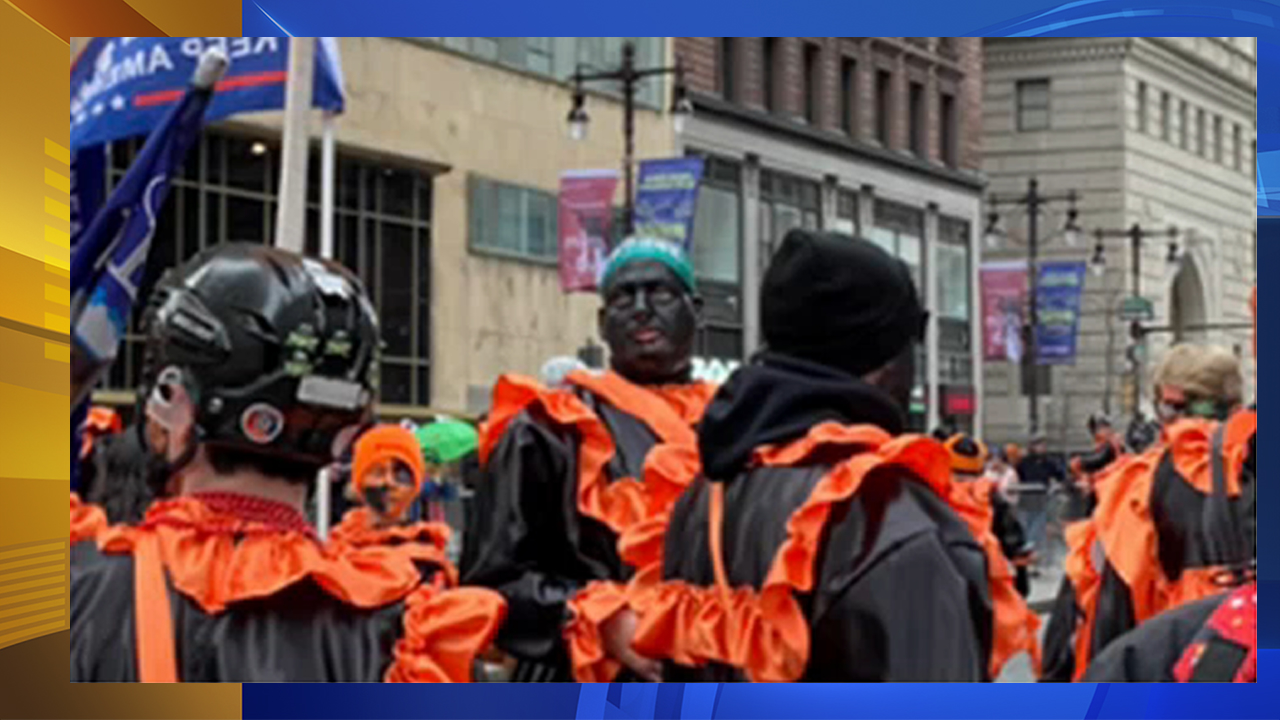 Mayor Kenney said on Twitter, "The use of blackface by someone affiliated with Froggy Carr today was abhorrent and unacceptable. This selfish, hateful behavior has no place in the Mummers, or the city itself. We must be better than this. The group was disqualified and we will be exploring additional penalties."

The use of blackface by someone affiliated with Froggy Carr today was abhorrent and unacceptable. This selfish, hateful behavior has no place in the Mummers, or the city itself. We must be better than this. The group was disqualified and we will be exploring additional penalties.

Philadelphia banned blackface from the parade in the 1960s.

Michael McGrail, who is not a member of the group but was with them during the parade, spoke to our sister station 6 Action News in Philadelphia.

"I think it's terrible, no one from Froggy Carr would condone that," said McGrail. "The issue is there are 120 actual members, but you have 570 guys. You can't control all that."

Officials said both men are out. They have been banished from Froggy Carr and all mummers activities.

"We're going to approach the other division and make sure these people don't ever march in the mummers again," said George Badey, an attorney that represents the mummers.

"I love the string band, I love all that they put into the costumes, they're amazing," said Beth Ryales of Blackwood, New Jersey.

The performance took on a whole new meaning for the South Philadelphia String Band, who lost three of their own in a crash January 2, 2019.

"We're paying tribute to the three angels that we lost - my son, great friend Joey Ferry and his fiancé Kelly Wiseley, they're in our thoughts and prayers always and today we're dedicating the entire day to them," said Denny Palandro, the captain of the brigade and the father of Dennis Palandro, one of the victims.
EMBED More News Videos

Police in Del. had pursued driver who crashed in South Philly, killing 3. Jim Gardner reports during Action News at 6 p.m. on January 4, 2019.

The group went on to win first prize for the 2020 parade.

As the performance ended, the family came together to acknowledge a loved one lost on his favorite day of the year.

"Happy New Year. Thanks for the support that we got from the entire mummer's community throughout the entire year. We love you guys and we need the support, so please keep it coming," said Palandro.
Report a correction or typo
Related topics:
societymummersparaderacismmummers paradeu.s. & worldnew year's day
Copyright © 2020 WPVI-TV. All Rights Reserved.
More Videos
From CNN Newsource affiliates
TOP STORIES