ONLY ON ABC7NEWS.COM: Cat rescued from North Bay fires with best intentions now in custody battle

KGO
By Wayne Freedman
SANTA ROSA, Calif. (KGO) -- It's a story of animal rescue, best intentions and now a disagreement unlike any other after the North Bay wildfires. Here's the latest on a custody battle over a cat.

UPDATE: Mack is back: No hard feelings after cat custody battle ends in Santa Rosa

Then, ask about Darcy's brother, Mack.

"It's devastating," said Wallace. "He is a member of our family."

Both felines disappeared when the family lost two homes in the Sonoma firestorm last October. They found Darcy and Mack, too. But that is where the story gets complicated.

"It has been our biggest headache in the fire situation," said Wallace. "The biggest."

After the fire, a burned and injured Mack turned up in the Sonoma County Animal Services, which put him on posters and in videos with nickname, Aspen.

When Wallace saw those pictures after a long search, the family went to claim Mack, but never saw him at the shelter. Mack may have been in the burn ward.

"The whole family was there, in the waiting room," she said.

Later, they learned that, almost two months after the fire, the shelter had found Mack a new home. It was an honest mistake, but Wallace wanted her cat back and pressed her case.

Two felines disappeared when a North Bay family lost two homes in the Sonoma firestorm last October. They found Darcy and Mack, too. But that is where the story gets complicated.

The shelter did a DNA test.

Wallace and her family invoked a unique Santa Rosa ordinance that allows families of lost-then-adopted pets to file a claim and get the pet back. Only, Mack's new people, who named him Phoenix, do not want to give him up.


"There is no precedent for this," said Alonso. The new people, whom he will not identify, told him they "have developed a bond with the cat."

"You cannot change the name of a cat to make him someone else," said Wallace. "Mack/Phoenix is still Mack. They are very selfish, thinking about their own feelings. This affects everyone in my family. We are not whole without him."

For now, Mack, previously known as Aspen and now Phoenix, remains in limbo. The shelter is serving as a go-between.

The standoff may wind up in court.

"How do you split a family up? How can you do that at the end of a day?" asked Wallace. "Heartless."

Her family has lost two homes, and yet mourns Mack's absence the most.

UPDATE: On Wednesday, Feb. 7, 2018, the original owner of the cat reported that Mack has been returned home. Click here for the full story. 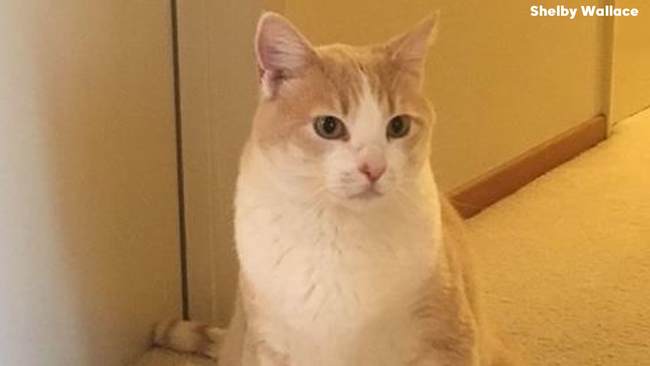