Injuries vs. MVP: What the 49ers need to do to beat Aaron Rodgers and the Green Bay Packers 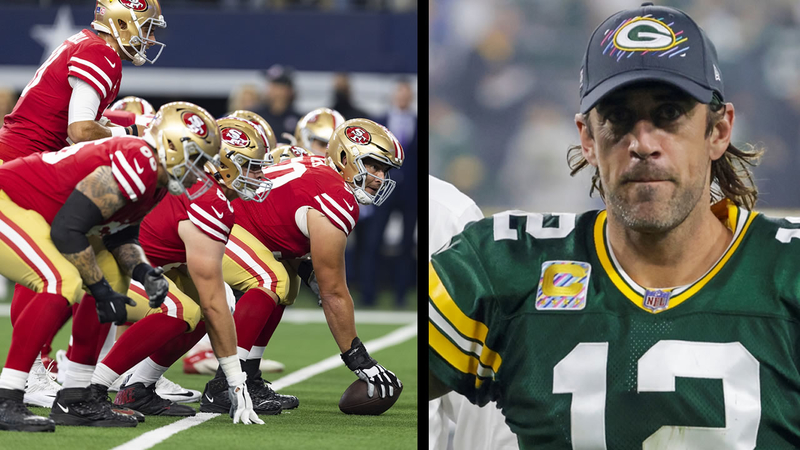 How injury-riddled 49ers can beat the Green Bay Packers

SANTA CLARA, Calif. (KGO) -- After a thrilling 23-17 win in Texas to defeat the Dallas Cowboys, the San Francisco 49ers now make their way to Wisconsin's Lambeau Field to take on the Green Bay Packers in the NFC Divisional Playoffs on Saturday night.

ABC7 News Sports Reporter Chris Alvarez caught up with the host of ESPN's "NFL Live," Laura Rutledge, to get her take from a national perspective on this weekend's game in Green Bay.

Next stop: Lambeau under the lights✨#SFvsGB Saturday 1/22 at 5:15pm PT pic.twitter.com/5Xq35N3stV

COMING UP CLUTCH AGAINST THE COWBOYS

"I do think we should be switching the conversation to what the 49ers have done this season and what they did in the game," said Rutledge.

Rutledge highlighted that quarterback Jimmy Garoppolo played an efficient game, outside of the one interception on Sunday, and believes Deebo Samuel will be key in this playoff run.

Health will be an issue, as defensive end Nick Bosa is in concussion protocol and linebacker Fred Warner is dealing with an ankle sprain.

Late Monday, head coach Kyle Shanahan revealed Garoppolo has a slight sprain in his right throwing shoulder after getting hurt sometime in the 2nd quarter in Dallas.

"The Packers are going to be a tough game for whoever is going to play them at Lambeau," said Rutledge.

It's time for the playoffs.

Rodgers is the reigning NFL MVP and Rutledge believes limiting the future hall of famer will be key for the 49ers on Saturday night.

"The reality is when you have a guy like Aaron Rodgers at quarterback, who is very rarely uncomfortable and will most likely once again win the MVP in back to back years, it's so hard to focus on trying to eliminate what he's going to do," said Rutledge.

She also highlighted the importance of getting tight end George Kittle involved in the game plan and creating mismatches against the Packers defense.

"Coaching is going to factor in big time. Really good coaches, especially at this point in the postseason, when we look back at the game, that ends up being the determining factor," said Rutledge.

On to the next! #SFvsGB under the Saturday Night Lights

Be sure to catch NFL Live weekdays on ESPN, 1 p.m. Pacific.

Go here for the latest news and playoff updates on the San Francisco 49ers.