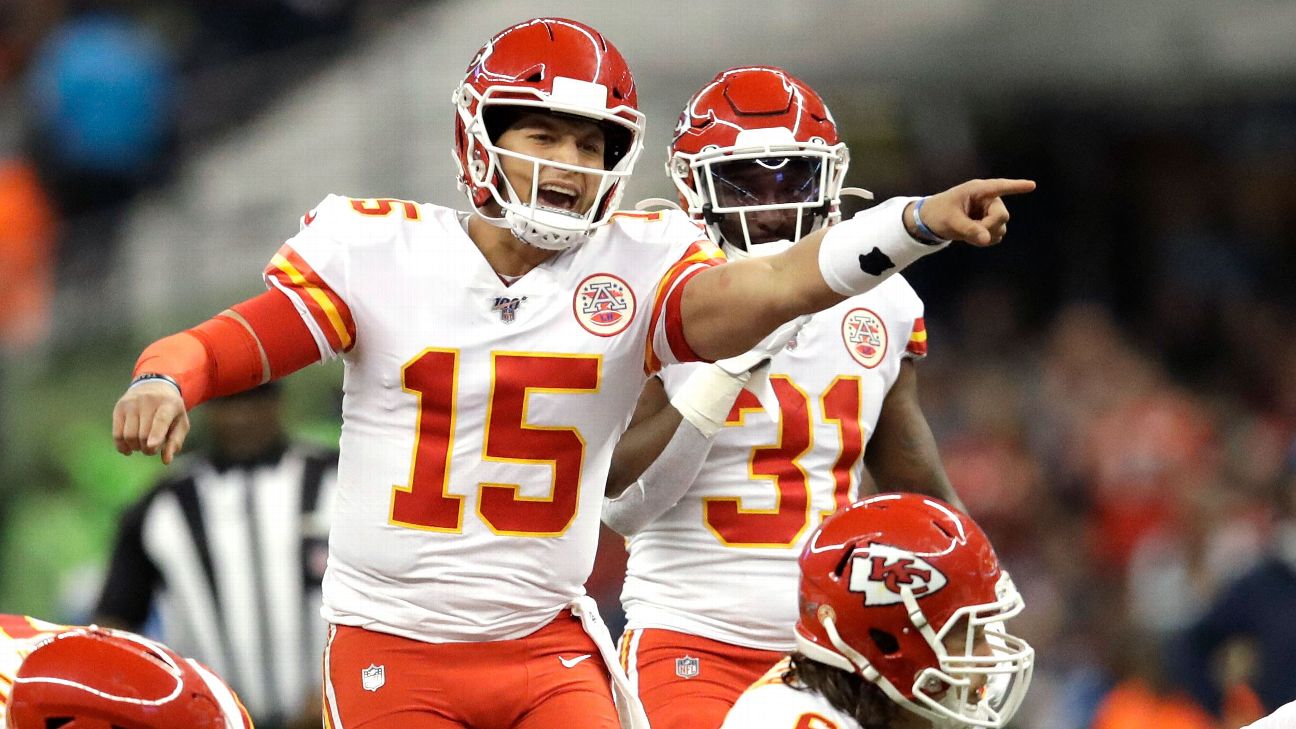 With six weeks remaining in the regular season, the AFC might already be coming down to a two-team race. The Patriots and Ravens stand well atop the conference after wins Sunday afternoon.
As we get closer to clinching season here at Playoff Picture headquarters, we'll start to sprinkle in projections from ESPN's Football Power Index (FPI), a metric that uses remaining strength of schedule and matchup analysis, among other data points, to derive playoff probabilities. In the AFC, the Patriots have a 95.2% chance to earn one of the top two seeds. The Ravens are at 80.2%.

Let's take a closer look at the playoff race through 11 weeks of the 2019 NFL season (with Monday Night Football still to be played).

Quarterback Tom Brady was short and apparently exhausted during his postgame news conference in Philadelphia, but he had no reason to be disappointed. A November victory of any nature in Philadelphia, against a team struggling to remain in the playoff picture, is worth celebrating. By all evidence, the Patriots are going to have to continue scrapping for wins every week to keep ahead of the surging Ravens in the race for the top seed in the AFC. FPI is giving them a 72.9% chance to do so, but the Ravens really need to make up only one game after clinching the head-to-head tiebreaker in Week 9.

Next up: vs. Dallas

After a 15-point home loss to the Browns in Week 4, the Ravens have reeled off six consecutive victories, a streak that is twice as long as that of the next-closest team. With quarterback Lamar Jackson playing at an MVP level, the Ravens are near locks to win the AFC North and have a 56.4% chance to be the second seed in the conference. Given the shaky nature of the rest of the AFC, we should all be looking forward to a Patriots-Ravens rematch, this time in the AFC Championship Game.

The Chiefs' victory Monday night in Mexico City restored some distance between them and the rest of the AFC West. They essentially have a 1-game lead over the Raiders, given theChiefs' Week 2 triumph in Oakland, and FPI gives Kansas City a 94% chance to win the division. TheChiefs still would have been in decent shape had they lost to the Chargers, with a 78% chance to overtake the Raiders and clinch the AFC West by the end of the season. But Monday's win gave theChiefs some breathing room.

Next up: vs. Oakland (after the bye)

A lot can happen in a few hours. The Colts entered Week 11 sitting in the AFC's eighth spot. Then they beat the Jaguars by 20 points at home, while the Texans lost on the road to the Ravens. That sequence temporarily shot the Colts up to the third seed (before they fell back to No. 4 following the Chiefs' victory south of the border). It also reflects the strength of the Colts' victories to this point and how it could impact their playoff future. Their Week 7 win over the Texans explains why they are atop the AFC South; and the Colts' Week 5 triumph at Kansas City would give Indianapolis the tiebreaker in the conference seedings. Needless to say, the Colts' looming rematch with the Texans could have massive implications for the division title.

Next up: at Houston

Next up: vs. Denver

All we really found out Sunday is that the Texans, certainly for now and possibly for the duration of the season, aren't an elite-level AFC team. Their loss in Baltimore bumped them down to a wild-card spot -- which they hold over the Raiders because of their Week 8 three-point, head-to-head win -- but the Texans can get themselves back on track in Week 12 at home against the Colts. FPI still gives the Texans the best chance to win the AFC South (68.2%), and overall, their chances to make the playoffs are 86.8%.

Next up: vs. Indianapolis

There was a moment on Sunday when it appeared the 49ers might really be the frauds that some suspected them to be, now that they've hit the most difficult part of their schedule. Having lost to the Seahawks in Week 10, they trailed a three-win Cardinals team by 16 points midway through the second quarter. But the 49ers got it together and assured themselves a winning season for the first time since 2013. It will only get harder for the 49ers, however. Their home game next Sunday night against the Packers will be for control of the top spot in the NFC, and even if they prevail, the 49ers will face a daunting pair of road games at Baltimore and New Orleans in consecutive weeks. That's why FPI is not yet sold on the likelihood that the Niners will be the No. 1 seed. They have a 37.8% chance, per the index.

Next up: vs. Green Bay

The Packers won't get an opportunity to ease their way back after a bye. Their game in San Francisco could have a dramatic impact on their lead in the division and their chances to receive a first-round playoff bye. Already, their chances to win the NFC North are 64.9%. Additionally, FPI gives thePack the NFC's third-best chance (20.6%) to clinch the top seed and a 26.3% chance to wind up at No. 2.

Next up: at San Francisco

After an unexpected one-week lapse, the Saints got back in business on Sunday with a 17-point victory at Tampa Bay. They trail the Packers in the standings because of one extra conference loss, but FPI gives them a slightly better chance to finish with the No. 2 seed (26.9%). If you'd like to see the NFC playoffs go through the Superdome once again, keep in mind that the Saints have only two games remaining against teams that currently have a winning record: Week 14 against the 49ers and Week 15 against the Colts.

Next up: vs. Carolina

The Cowboys' win in Detroit, combined with Philadelphia's home loss to New England, leaves them as the only team in the NFC East with a winning record. That puts the Cowboys in a relatively commanding position in the division. FPI gives them a 66.9% chance to win the NFC East and a 70.5% chance to make the playoffs as either the division champion or an NFC wild-card team. But a lot can change in a week, as the Cowboys have perhaps the most difficult game on their schedule looming in Week 12.

Next up: at New England

The bye came at a good time for the Seahawks, who were involved in a combined 291 plays during consecutive overtime victories in Weeks 9 and 10, the most in the NFL over that period. They'll need the rest for a brutal stretch run. The 49ers' victory maintained San Francisco's NFC West lead, and the Seahawks will have to navigate the NFL's third-most difficult remaining schedule, per FPI, as they try to make up ground. FPI gives them only a 27.6% chance to win the division.

Next up: at Philadelphia

It took a historic comeback for the Vikings to avoid the kind of loss that can crush playoff dreams. Playing a three-win opponent at home, the Vikings needed to become the first team in the past 40 seasons to score a touchdown on every second-half possession and win after trailing by at least 20 points at halftime, per Elias Sports Bureau data. A win is a win no matter how it happens, however, and the Vikings now have a 93.6% chance to at least reach the playoffs, per FPI. They face tougher odds to win the NFC North, in part because of their 1-2 division record. FPI gives them a 35.1% chance to wrest control of the division from the Packers.

Next up: at Seattle (after the bye) 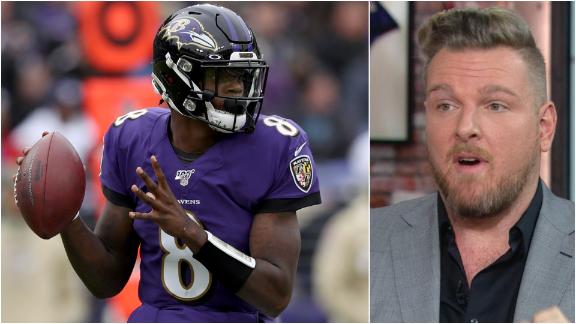 McAfee: The Ravens look unstoppable at the moment
Pat McAfee says Lamar Jackson is doing something that nobody else can do right now in the NFL. 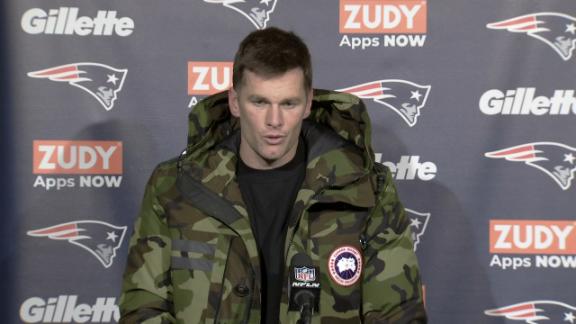 Brady: Offense is up and down right now
Although the Patriots defeated the Eagles, Tom Brady isn't content and feels the offense is inconsistent. 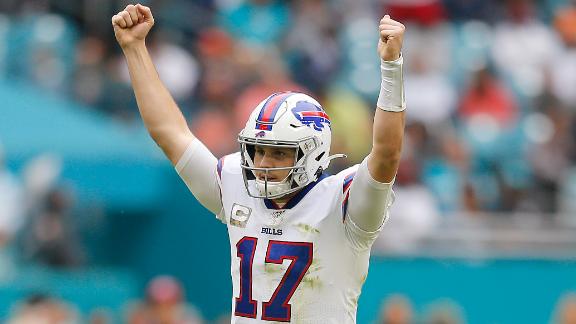