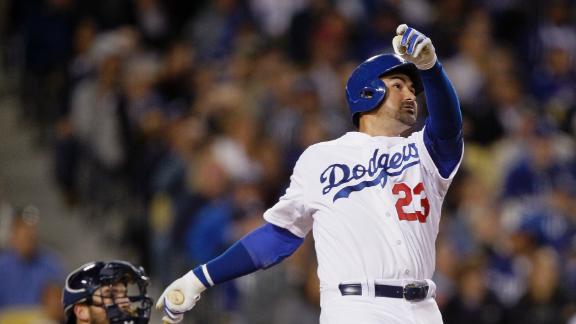 
Gonzalez, who had gone 3-for-5 with a home run in each of the Dodgers' first two games against the San Diego Padres, homered in his first three at-bats against Andrew Cashneron Wednesday night in the series finale, a 7-4 win for Los Angeles.


"I was able to run into three fastballs and I thank God they were able to go over the fence. It's definitely right up there as a personal feat," Gonzalez said.

He homered in the first and led off the third with another homer, extending the Dodgers' lead to 5-2. He led off the fifth with his third homerand took a curtain call from the dugout steps.


It's the first three-homer game of the 32-year-old first baseman's career. Gonzalez homered in four consecutive at-bats dating to Tuesday before his RBI single in the sixth.


"He wasn't bad today, huh?" Dodgers manager Don Mattingly said. "When you get hot you're just feeling good. You want to ride that streak as long as you can as far as hitting the ball hard."


Fittingly, Gonzalez received his Silver Slugger award from last season before the game. Then he went out and had a four-hit game to go with consecutive three-hit games Monday and Tuesday, becoming the first National League player with three hits in each of his first three games since Orlando Cepeda of San Francisco had three straight three-hit games in 1963.

Asked whether he felt locked in coming out of spring training, Gonzalez said, "I didn't feel good at all, but I didn't game plan, either, and I wasn't mentally involved, either."


Mattingly, whose power often came in spurts over his impressive 14-year career with theNew York Yankees, compared Gonzalez's performance over these three games to riding a wave.


"You don't want to let it get away," Mattingly said. "You want to have that kind of streak as long as you can."


Gonzalez, who grew up in San Diego, has always hit well against the Padres, one of his former teams. He had a .328 average and 10 home runs in 49 games entering Wednesday.


"It was a one-man show tonight," Padres manager Bud Black said. "He has power, the ability to hit for average and kick in runs, he used the whole field, and does what the situation calls for. He's a tremendous player. He's a Gold Glover on defense, he's been an All-Star -- he does it all."


Each of Gonzalez's home runs Wednesday was a solo shot. He led the major leagues with 116 RBIs in 2014.


Gonzalez is the first Dodger to hit three in a game since teammate Juan Uribe did so against Arizona on Sept. 9, 2013. He's the third player in franchise history to homer in his first three games, joining Jimmy Wynn in 1974 and Carl Furillo in 1955.